Scrabble enthusiasts to descend on Canberra for 2018 Championships 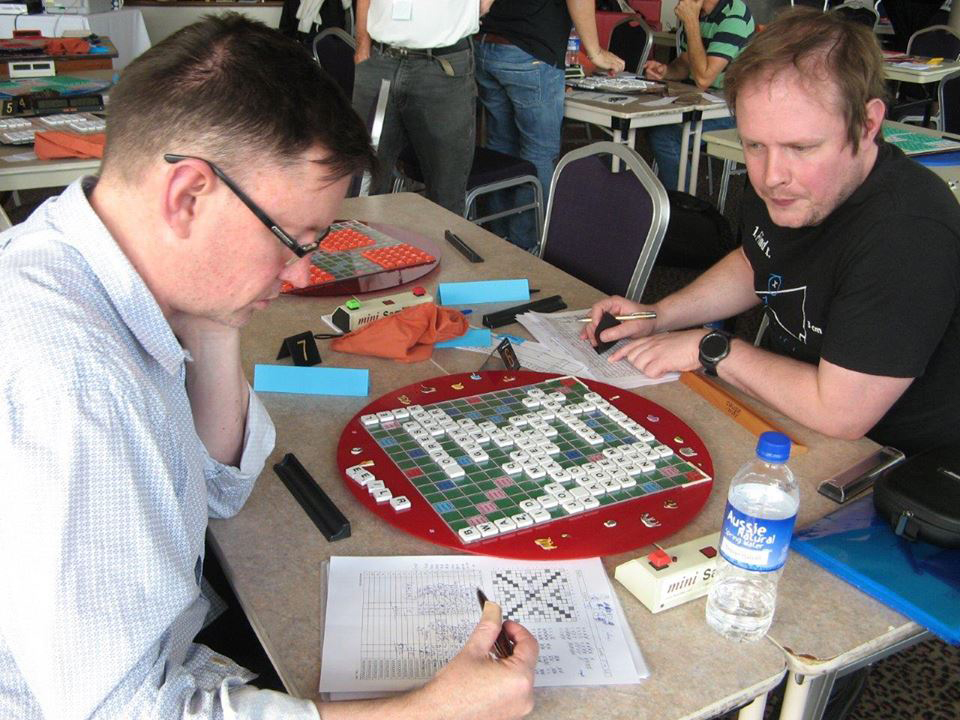 2017 champion Russell Honeybun (right) wins a crucial game in the 2017 Australian Championship against Trevor Halsall who finished runner up.

Many families will use the Easter break as a chance to reach into the cupboard and pull out the Scrabble set for some family entertainment. But this Easter, 150 people will take the game to the next level, travelling to Canberra to compete in the 2018 Australian Scrabble Championship. The event is sponsored by Communities at Work and The Argyle Inn, Taralga.

Competition Scrabble is very different to what people experience at home. Games are played to 25 minutes per person with severe penalties for going overtime. An official dictionary is used which contains over 275,000 words. This huge amount of words shows the natural evolution of the English language. A century ago words such as ‘internet’ and ‘computer’ were unheard of but are now part of everyday conversation. This is in addition to countless words from other languages becoming part of the English language. Some of these include ‘cafe’, ‘blitz’, ‘vodka’, ‘karate’ and ‘kangaroo’.

But competitive Scrabble is not just for the word buffs. From continually adding up the values of different plays to calculating the probability of picking out certain tiles, mathematics becomes an integral part of the game. Problem-solving skills such as blocking your opponents move and fitting words into tight spots also come into play.

Competition Scrabble is as much a social event as it is a competitive one. The youngest player is aged 10 whilst the oldest is 92 and competitors are aged everywhere in between. Regardless of age or background, a Scrabble competition for many people becomes a social event to meet new people who they share nothing in common with – except for a love of the game.

The competition itself is gruelling with 24 rounds played over 3 days. This prestigious event is in its 32nd year and it just the 3rd time that Canberra has hosted it. Players are split into two divisions and will travel to Canberra from right across Australia – from Cairns to Hobart and across to Perth. Included in the field this year are several international competitors including representatives from New Zealand, Singapore, Malaysia, Thailand and South Africa.

The event will be held from Saturday 31st March until Monday 2nd April in the Bradman Room at Manuka Oval. Spectators are welcome and spare sets will be available for people to come and play social games if they wish to do so.

There are some Scrabble clubs that meet regularly in Canberra. Newcomers are always welcome. If you are interested in joining one, please click here.

Katie Lew - 1 hour ago
David Matthews I want this! View
Astrid Smith - 1 hour ago
Rodney Stubbings I will when I win lotto tonight haha View
Sally Danger McCloy-Bacon - 2 hours ago
Evan McCloy it doesn’t have a lagoon but is still pretty nice… View
Lifestyle 2