Tuesday the 14th of November is the birthday of Canberra’s oldest radio station, 2CA, who turn 75 years old, and they’ll be celebrating by having an outside broadcast from the site of their first studio at 42 Giles Street. Apparently it’s a coffee shop now…something along the lines of “Hungrycinos”, although I can’t find that place in the phone book. I do know that it’s next to the BWS bottle shop.

2CA will have their first paid employee, the now 90 year old or thereabouts, George Barlin co-hosting the breakfast show (which will be the only show being broadcast from Kingston).

Among the celebrations, at about 7:45 there’ll be a really big cake, at about 8:15 they will unveil a plaque, and there will be plenty of prizes and giveaways (I’m told that there is a holiday among the prizes) as well.

And just for those amongst us who probably have very little spare time between breakfast and getting to work in the morning, 2CA will be offering up a barbecue breakfast.

Peter Leonard, who worked at 2CA for a while, will also make an appearance, along with plenty of other ex-2CA staff.

The Outside Broadcast will run from 6am to 9am and I would imagine that there will be people loitering for a little while after the event as well. It sounds like it should be a lot of fun, and I’ll email some photos to Johnboy later in the day (after work to be a bit more precise).

UPDATE ED: As promised, Sam has sent in some pictures and even a video for your delight. This first is 2CA’s birthday cake. 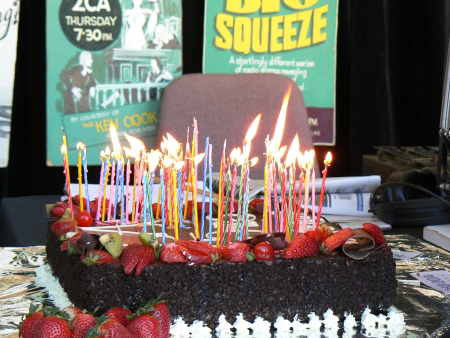 Peter Leonard, George Barlin and Cheryl McKay (did admin work for 2CA many years ago) 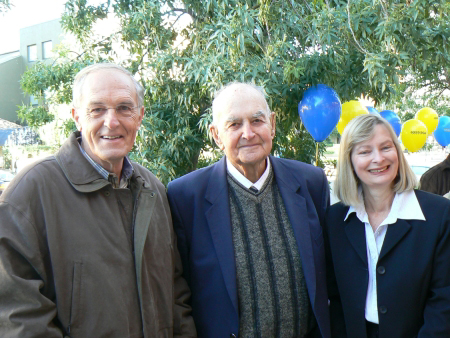 Some of the excited (and cold looking) crowd 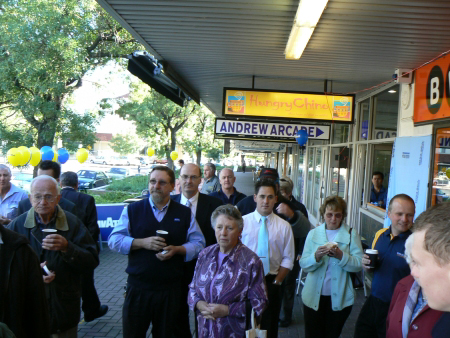 And for anyone interested, you can watch Sam’s video of the the singing of Happy Birthday and cake cutting on YouTube.

Thanks Samuel, just about the time I first arrived in Canberra, but then I moved off again.

Yeah, 2CC used to play cool stuff like ‘The Sweet’ and, and….

I’ve forgotten now, probably Skyhooks and Sherbet and stuff like that…

I remember when 2CC got going, it was new and young and played hip music! 2CA was a doddery old thing then. It was in Canberra when my father was a kid, they had local kids in to sing songs on the radio.

Ok, I’ll pull my head in then.

When did 2CC start? I remember coming to Canberra for a school excursion in about 1978 and they had some sort of outdoor radio gig on in Garema Place.

From memory it was 2CC.

LG, Johnboy decided to host the pictures here; he could have declined to put them up when Sam sent them.

In private, I bet Samuel still calls radio “the wireless”.

Does anyone else find Samuel’s obsession with radio and old radio jocks slightly disturbing?

Oh, nice pics by the way, I didn’t realise radio had been around for so long in the ACT.

I would say that they have last 74 years too long.

Samual, your stalking of 2CA staff is inappropriate at the best of times, (have you READ any of your e-mails) but I really don’t think we need photos of this chewing up bandwidth over here as well.

i have stumbled across 2ca’s breakfast show on the odd occasion as i flick through the stations in the car. it is atrocious.

Ahhh – I’ll have to don my old “Life Sation 2CA” t-shirt this arvo.

Angela Moore - 11 minutes ago
"The Poplars" The Poplars are fell'd, farewell to the shade And the whispering sound of the cool colonnade. The winds play no... View
Sue McIntosh - 4 hours ago
Ho hum, what else is new? More trees given the chop. If council is so worried about the trees falling, then they should be re... View
Property 12

The Best Birthday Cakes in Canberra