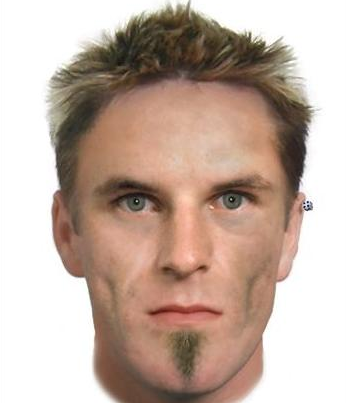 ACT Policing has released a facefit of a suspect sought over an act of indecency which occurred at the Weston Skate Park on Friday, February 11.

The offender is described as Caucasian, aged in his mid 20s, about 5’11” tall with a thin build. He has blue eyes and short brown/blond coloured hair. He was unshaven with a goatee. He was wearing a light grey coloured hooded short sleeve t-shirt, black shorts and ‘DC’ skater shoes. He had a full sleeve tattoo covering his left arm and a love heart tattoo on his left calf muscle.

Police are appealing for any witnesses who may have seen a man matching this description in the area of the Weston Skate Park on Friday 11 February to contact Crime Stoppers on 1800 333 000 or report via the website at www.act.crimestoppers.com.au. Information to Crime Stoppers may be provided anonymously.

He managed to squeeze in a hoodie on a short sleeved shirt. What’s next singlets with hoodies?

C’mon people, this one shouldn’t be too hard to find.

Up, several distinctive tatts, I wonder if they have forwarded this to the tattoo and piercing establishments?

Diggety – yeah, it is, they’re like 5 bucks at any piercing joint and sorta popular with new gen skater type people

Is that dice earing supposed to be there?

C’mon people, this one shouldn’t be too hard to find.

Ian McLeod - 3 hours ago
Charles Godworth yes I do and I also upgraded to three phase and will install a Zappi charger, but most won't need it. The po... View
Ian McLeod - 4 hours ago
Ben Garden which is what I'm doing and around town 2KW home charging is fine View
News 27