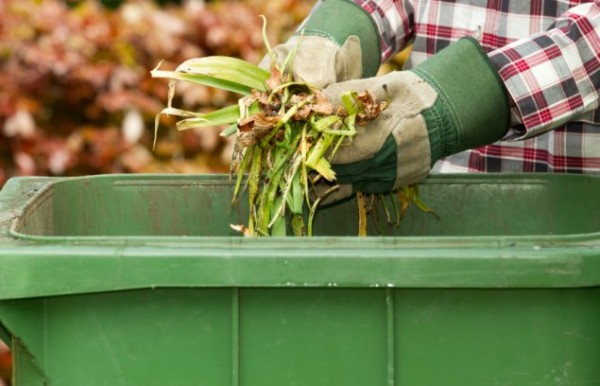 Up to 40,000 tonnes of food waste a year could be diverted from landfill if the ACT’s green bins were not limited to garden waste, according to the ACT Greens.

Greens MLA Caroline Le Couteur has launched a campaign to convince the ACT Government to allow households to be able to dispose of their food scraps in the green bin, the contents of which would be converted into compost, or ‘black gold’ as it is known.

At present the green bins, most of which rolled out in April, only take garden waste which is converted to mulch.

Ms Le Couteur said 30 per cent of household waste is food waste, and while many compost on site, not all have the time or are able to.

She said food waste should not be rotting in landfill, creating methane and contributing to harmful greenhouse gas emissions.

Composting Canberra’s residential food waste would reduce the ACT’s greenhouse gas emissions that come from food waste by 96 per cent.

Local councils in NSW, such as Queanbeyan’s, had been collecting food waste for composting for years and it was time the ACT caught up, Ms Le Couteur said.

“Given that we have made a commitment to zero emissions by 2045 this is the step we need to take,” she said.

Ms Le Couteur also called for food businesses to be required by regulation to start disposing of their waste better and have it composted.

She suggested biodegradable bags could be provided to households for efficient disposal and placement in the green bin.

People who join the campaign will receive a free ‘Compost not Landfill’ sticker to place on their kerbside landfill bin.

Minister for City Services Chris Steel said there was more to food waste than just collecting it, ‘we need to work out where and how to process the waste’.

“We have already been running a public consultation with the community and industry on whether advanced forms of composting like anaerobic digestion could play a role in Canberra,” he said.

“Our current planning work on food collection is based on the Waste Management Strategy 2011 and reaffirmed in our Waste Feasibility Study in 2018. There are a number of recommendations in the Strategy that the Government is looking at implementing before 2025 including food and organic waste. The Government was committed to rolling out green bins to all of Canberra first – which it has done ahead of schedule and under budget.”

Lets stop firing from the hip and apply at least a 3 second google search over the topic.

This link https://www.environment.act.gov.au/__data/assets/pdf_file/0007/576916/ACT-Waste-Strategy-Policy_access.pdf notes that methane emissions harvesting from landfill was installed way back in 1998 and limits the greenhouse gas emissions to just 3%.

Actually, the report also says elsewhere that while the burning of methane to generate electricity is part of the strategy that limits greenhouse emissions at MLRMC to 3% of the total in the Territory, up to 40% of the methane at the landfill still escapes into the atmosphere.

The bigger worry is what the government is planning to do next year namely build a huge waste incinerator. It’s also in the report as follows:

Emissions from this will poison Tuggeranong.

Meat should go to landfill with disposable nappies.

And where is it proposed to build the anaerobic digestor, Ms Le Couteur?

Please don’t do it at MLRMC – there are enough odours and toxic emissions coming from there already.

Jazzy Dhooria - 19 minutes ago
You voted them in... Just sayin View
Dale Janssen - 5 hours ago
Greg Myat the speed limit was dropped from 60 to 40. View
News 11

chewy14 - 22 minutes ago
You do have to laugh at their statements about "being more comfortable" with further changes because of the high Vax rates. T... View
kenbehrens - 1 hour ago
I have no issue with ACT moving to 12+ in its stats. We were only a few days behind NSW who were touting their vax achievemen... View
Feedback - 3 hours ago
Lighting up of monuments in blue to celebrate vaccination rates - How utterly ridiculous. This is a city which now has 80% va... View
Opinion 83

assiduous - 27 minutes ago
$500 per week is not low - it is enough to build a modest detached family home every 10 years. It is a reflection of Australi... View
Peter Jovanovic - 3 hours ago
So if it all gets too hard for the parasitic landlords and their parasitism isn't as lucrative as they hoped they'll just dem... View
tuggeranongist - 3 hours ago
You are mistaken on both of these points. Section 64B(1)(b) of the Residential Tenancies Act makes clear that rent can be inc... View
News 231

Claire Anderson - 37 minutes ago
Daniel, the newer ones really do stop way WAY more abruptly. I too rode the old ones with help of people pulling and never go... View
James Coleman - 55 minutes ago
Hi Kane P-s and Bec Lester , the journalist behind the article here - just about to send you each a DM concerning your storie... View
Brianna - 1 hour ago
It is so good that her family can be there for her. I know her mum will fight like a tiger to ensure that this flying fox is... View
Opinion 4

kenbehrens - 39 minutes ago
Alicia Payne, I guess it comes down to the priorities of the ACT Government. If the Government is so concerned about health,... View
News 42

ChrisinTurner - 3 hours ago
It is interesting that our governments promote densification while at the same time moving government services away from the... View
Property 42

Everyone loves a good pub feed, a refreshing beer, or simply catching up with mates in a laid-back environment. Being...
News 38

@the_riotact @The_RiotACT
The ACT #Integrity Commission's first report is imminent, and the #corruption watchdog will soon have phone-tap powers https://t.co/usBVGpKfEW (45 minutes ago)