Working together, enriching lives
13 May 2019 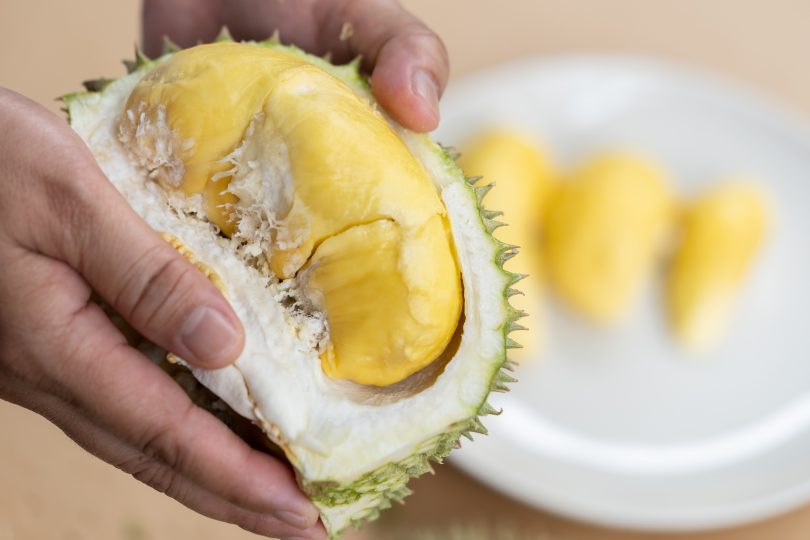 The potent stench of the durian fruit led to 550 students being evacuated from UC Library on Friday.

It’s been named one of the “most god-awful smells in the world” and it seems it can even be confused with a gas leak, with the smell of the durian fruit leading to 550 people being evacuated from the University of Canberra Library on Friday (May 10).

Firefighters evacuated students and staff from the building in under six minutes at about 2.30 pm on Friday afternoon following reports of a strong smell of gas.

They then investigated the source of the smell and found it came from an unexpected source – part of a durian fruit left in a bin near an air vent!

According to the ACT Emergency Services Agency, HAZMAT crews then conducted atmospheric monitoring to ensure the area was safe before people were allowed back into the building.

“Fortunately the suspected gas leak turned out to be a part of a durian – the offending fruit has now been removed,” UC Library wrote on their Facebook page, adding that the library was completely safe despite the “lingering gas-like smell”.

The library said the offending fruit was removed from the building in a sealed bag.

The evacuation of the library due to the rank smell of the durian fruit is starting to attract international media attention and, it seems, is the second time something like this has happened in Australia in a little over a year.

In April last year, more than 500 students were evacuated from RMIT’s library in Melbourne because of a gas smell that turned out to have originated from a rotting durian that had been left in a cupboard.

UC Library is intent on the problem not being repeated in Canberra and has now banned durian fruit from its premises, putting up a temporary Facebook profile photo to emphasize the decision. 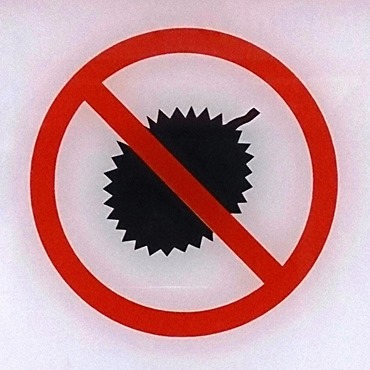 Durian fruit has now been banned from UC Library, with this image used as the library’s temporary profile photo on Facebook.

While this may be disappointing for some students who took to social media to declare their love for the tropical fruit, a ban on durian fruit is certainly not uncommon.

“Tastes like heaven. Smells like hell! In Singapore they have ‘don’t eat durian’ on the train signs!” commented one student.

“Not healthy when eaten in big quantities- nor it seems if left out in a bin!” commented another student.

According to the Smithsonian Magazine, the notorious Asian fruit has such a potent stench that it’s banned on the Singapore Rapid Mass Transit.

The magazine’s food writer, Richard Sterling, once wrote that “its odour is best-described as…turpentine and onions, garnished with a gym sock”.

Science Alert agrees, listing the smell of the durian fruit as one of the “most god-awful smells in the world you should do your best to avoid”. In future, UC library will no doubt be doing its best to do exactly that.

Have you ever tried durian? Can you stand the smell? Let us know in the comments below.

Clare Marie you’ll have to try some

Kershia Stirling Amy Buczek Pip Ernsteins you guys game to try this at school??
Jack Lu has been quite eagering to let Kody brings one in. I have to put a stop to it. Honestly, I can’t handle it myself.

Hahaha honestly I’m ready! Hahaha the kids would love to see what it’s all about 😂😂😂

Reply via FacebookHide replies
Judy Nguyen9:47 am 17 May 19

Amy Buczek game on. Will send one in sometimes nect week. Prepare for evacuation!!!!

Yep! The hazmat team was called into my ward in a major sydney hospital

Jordan Darcy can you confirm this

Bernie. This is what I was talking about. Can I still bring it to work? ;p

May Yin this is what you should do in the office

Jess Cat Dang i would run towards it haaha

Traecy Aston
You been getting your Durian fix ??

Traecy
You know you want to 🙂

Jason Heddle definitely not. All yours😄

Kayleigh Bartlett josh is making me try it

😂😂 apparently they have in the Phillipines

Todd Devlin come on we both know the real truth

Accident or prank? I’d bet on the latter.

I had a durian flavoured ice cream in Laos earlier this year. I thought it tasted ok, but wouldn’t go out of my way to eat it again. At least it didn’t stink in that form.

It is a very distinctive aroma. I’m surprised nobody searched for the fruit first…😳

Amanda Pool, yes exactly what we talked about…… food all around 😂😂😂

Carol-Anne Silk was this u

Bree Vucas hahahahah no – this fruit is definitely not my fav, but swear it’s not as bad as people make it out to be 😂

Carol-Anne Silk carol-ANNE. They thought there was a GAS LEAK

Bree Vucas hahaha!!! It’s just really strong 😂 literally have you read the comments? When I was in Singapore there is no durian signs on all public transport 😂

Tiffany Seo this is why we got kicked out of the library last Friday, not gas leak lol

Vicky Ho omggg lmao this is so funny 😂😂

Jacqui Michel was this you bahahah

Chrystal Lalljee nah but we all got evacuated 😭😂

Calvin Stephanie Caitlin Mitchell Guys, I swear I could smell gas in my accommodation hallway the other day

Was this the fruit they didn’t want us to have in our hotel rooms in Thailand??? Cause it makes sense now 😂 Carson Woolner

Kenya Grooters we tried it the other day, Wayan bought some for us to try, smells awful and the taste 🤢 🤮

Reply via FacebookView 1 reply
Lachlan Thompson9:51 am 14 May 19

Andrew Thompson not allowed on train

Reply via FacebookHide replies
Victoria Red9:49 am 14 May 19

My favourite fruit I miss u

Dont do it Bro they smell and taste like bad feet and fart combined!!!!!😂😂😂😂😋

Reply via FacebookHide replies
John Ogilvie Collins3:35 am 15 May 19

Taya Moore When did you first taste bad feet and farts together…? 🤔

Reply via FacebookHide replies
Shannon Marks6:35 am 14 May 19

Reply via FacebookHide replies
Shannon Marks6:41 am 14 May 19

Reply via FacebookHide replies
Shirley Hadfield6:11 am 14 May 19

Durian fruit is not allowed on any Singapore Transport for good reason.

Reply via FacebookHide replies
John Moulis6:02 am 14 May 19

My memory of the UC (then CCAE) library as a student in the 1980s is that a Durian would have been welcome. There was certainly a lack of books there and most students spent their time reading the newspapers waiting to go back to their dorms to watch the Ray Martin Show..

Colum from my hometown 😆

Yes, we are in Thailand right now – it is a disgusting smell

I remember them when I worked at woolies thawing out in the fridges talk about stink.
No wonder there are signs all over Singapore not to take them on to trains & in hotels.

Eating durian is like eating the finest custard in a well-filled outback outhouse.

I was walking past the IC library just as the firies were leaving. I joked to one of them about students burning books and he made some murmurings that it was all sorted. Words of a tax leak were spoken. There were many firies and at least 3 pumps. Building was empty – all very dramatic!!
Hilarious to think it was a Durian!

Vick Ster reminds me of Singapore!

Russell Tunks was dis u?

Nikhil Krishnagiri you know what to do bro😎

Reply via FacebookView 3 replies
Janita Keating8:53 am 14 May 19

Was an evacuation required Caeli Keating??

Missy Squidget just about! Hot tip – don’t have durian with alcohol or soft drinks as it does not end well

Mitiana Arbon 😂😲 what is it?

Who cut the cheese?

Cat Farrugia so that’s why there were fire engines at the library on Friday!

Angie Torrealba this is what you were talking about the other day… and there you go.

Market lady in Singapore refused to sell spouse and me durian pancakes. Insisted we have mango instead. The mango pannies were awesome.

Durian is a wonderful fruit that should only be eaten outdoors by people who want to ‘remember’ the taste for days afterwards! Like ‘Sur stromming’ when I was in Sweden…. and I’ll never forget the time someone spilt a pack of asafoetida on the common room carpet at my residential college

Thanus Songprasart oh my god. Why does people even bring this to the library

at least it wasn’t in their mouth🤦‍♀️ oh the memories 😳

Lauren…..maybe you should just take apples instead?? 🤣🤣

I was innocently on my room listening to the evacuation alarm

Tam omg. Like that time in the hospital for your grandma

Jeez it must be potent 🤢

Lesa Gale didn’t you once offer me a durian lollie? 🤮

Marina Simoncini delicious. Best eaten with gloves on balancing on plastic stools on the street in some asian country. My fav is KL on Jalan Alhor. Creamy.