On Saturday 08-APR-06 we did the Civic Public Art Walking Tour and lived to tell the tale.

And so, I present to you item # 28, Father and Son, by John Downie. It’s in Garema Place 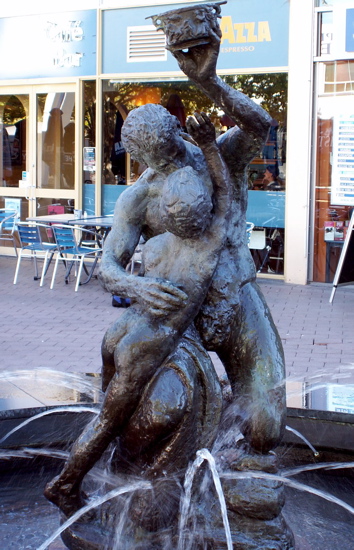 This artwork was presented to the people
of Canberra by the Hon. Alex Downer in
memory of his father Sir John Downer.
Originally installed in 1964, Father and Son
was restored and relocated in Garema
Place with a new marble base in 1986.

It’s worth noting that the “Hon. Alex Downer” was Sir “Alec” Downer, the father of the current Minister for Foreign affairs. Sir John is the Downer the inner-north suburb is named after.

Got an image in, or of Canberra you want to share with the world? Email it to johnboy@the-riotact.com

I’m sick and tired of talking about the pedo fountain to interstaters. A bit saddle sore as well.

“No Alex, you can’t have the fishnet stockings that I’ve have in this small container!”

Would explain a thing or two about the grandson.

Hm, I must admit, looking at the fountain, the relationship doesn’t look exactly parental…

So the Suburb Downer dude was the Grandfather of Lord Downer of Bagdhad? Glad I live in Hackett…

Michelle Chant - 2 minutes ago
Dincer Mutlu that would need to include labour and materials… View
Kay Polsen - 36 minutes ago
I could think of better things to do with the money View
Joe Linford - 41 minutes ago
$259.25 a tree planted wow! View
News 13

Tayla Hart - 25 minutes ago
Helen Hart yeah this is the one!! View
Emily Drown - 2 hours ago
Another fun fact for you Chi Sobs View
Daniel Carter - 3 hours ago
Nick Porter Lu Chen what a beautiful lake 👀... View
Lifestyle 17

Gabriel Spacca - 55 minutes ago
So the pollies had a bar in Parliament House for two years before the rest of the ACT. How unusual for politicians to get ben... View
Kethmi Gamage - 57 minutes ago
Chamika Fonseka I too hate the stagger juice View
Kristy Morton - 1 hour ago
Very interesting read View
News 3

Zoe Walker - 3 hours ago
Don't forget that Canberra Diamond Blade in Mitchell still sells masks. They have had masks the whole time even when everyone... View
News 2

MERC600 - 3 hours ago
An interesting note from our Chief Health Officer Dr Coleman regarding a building site outbreak. "The site may be shut down t... View
Mike of Canberra - 3 hours ago
I have no doubt Delta /Covid is a real threat and potentially hazardous to many who have it. I can't help feeling, however, t... View
Food & Wine 8

Capital Retro - 4 hours ago
It's impossible to complete this form unless you have an existing MyWay Card: https://form.act.gov.au/smartforms/servlet/Smar... View
Peter Hatfield - 5 hours ago
Les Wells Julie is correct .The day excursion fare does not apply to the XPT to Sydney. The entire rural transport concession... View
Julie Macklin - 5 hours ago
Peter Hatfield My mother would physically not be able to get on a coach, but she can a train. Others like her. View
Lifestyle 3

Capital Retro - 5 hours ago
The first thing you learn when living in the bush is never leave an entrance door to the house or shed open and close all gap... View
show more show less
*Results are based on activity within last 7 days

The ACT Government will spend $14 million to plant tens of thousands of new trees across Canberra by 2024. The...
News 176

Canberra needs a new multi-modal public transport hub with connections to the Parliamentary Zone and the city and beyond to...
Opinion 202

Speculation around a potential return to Canberra of the Supercars, operating in a circuit around Exhibition Park, has raised the...
News 129

@The_RiotACT @The_RiotACT
It’s unlikely construction workers, childcare workers and teachers will be subject to vaccination mandates in the ACT because of our high vaccine take up, according to Health Minister Stephen-Smith https://t.co/W3jZ4IaJET (1 hour ago)

@The_RiotACT @The_RiotACT
The historic Sir George in #Jugiong is one of the most popular country pubs in Australia and it could be yours https://t.co/XsMr8xLXgy (3 hours ago)

@The_RiotACT @The_RiotACT
The flowers are blooming at @TulipTopGardens right now and owners Bill and Pat Rhodin are making sure visitors don't miss out on the beauty by posting photos online. See some of them here https://t.co/GWEoYH5lmu (4 hours ago)