Storm cell zeros in on Canberra

Well the storm pictures have been so wildly popular they’re wreaking havoc on our server and internet connection. A big hello to all the new readers.

If all you want to do is see pretty storm pictures then here’s a slideshow for you and youtube can cover the costs (now updated with our full set of pics and a sound track courtesy of The Lavans):

Details on the provenance of the pictures below:

I can’t find one of those fabled alerts anywhere logical like the SES, Canberra Connect, ACT Govt, ABC local or similar websites, but the BOM is warning this one could be bad, and from the look of the radar shot – a big black blotch right over Canberra – someone’s going to cop it.

Watching the radar over the last hour, this cell just appeared out of nowhere just south of Hall. 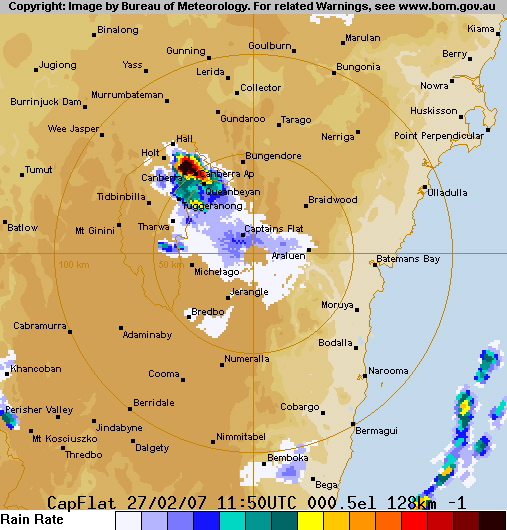 [ED – used a slightly more recent image than the one Al sent in. One hell of a storm and a caution against relying on the warning system for something as unreliable as storms in the mountains]

If you missed them, these ones are doing the email rounds, please don’t send them to me again, much as i appreciated the two dozen large sets of pictures I’ve had (if the photographer would like a credit, please get in touch): 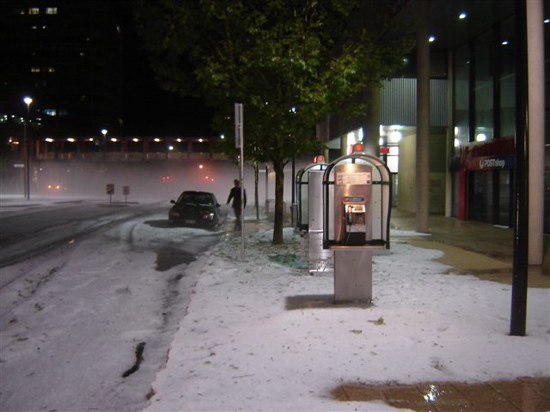 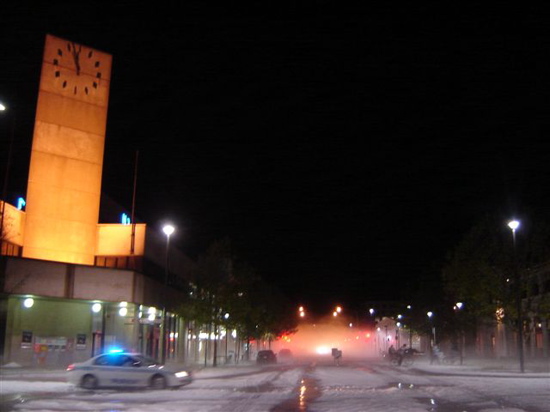 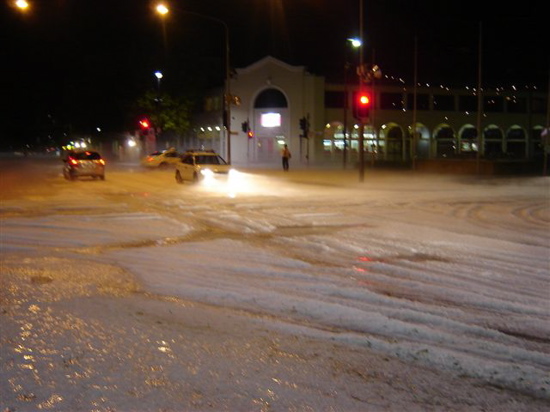 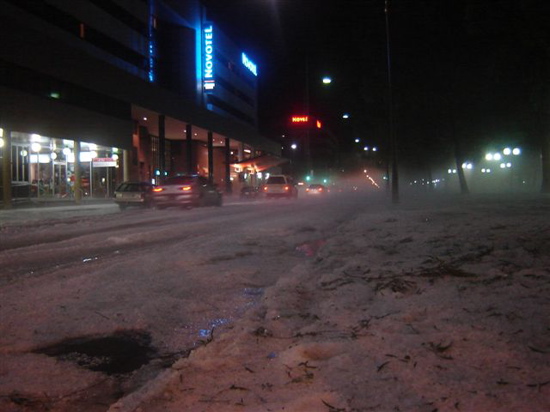 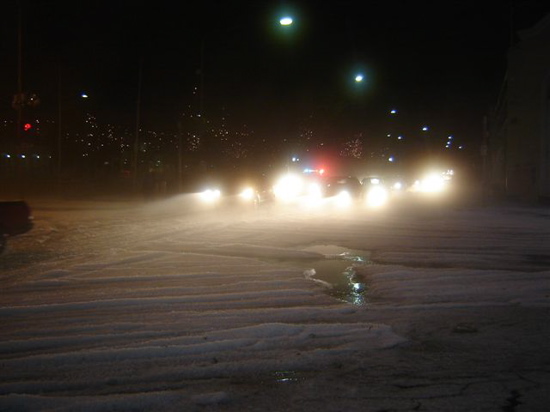 cool youtube clip….just watched it. Only prob is that my photos were marked as “yass – photographer unknown” and the photos from yass were marked “photos over duffy – bartron”…still…I got a bit of publicity

RA – Great work with the utube clip – I was lucky enough to be tucked in at home watching tele when the storm hit – and I dont work in the city – so would never have known the extent of the storm if it wasn’t for your great reporting. Great soundtrack too!
Keep up the great work.

I have to admit my flattie and I were amused when we watched the weather report on prime at about 10.30pm that night – which reported nothing about a storm (whilst we were being hailed on!) 🙂

Should we be worried about the new Canberra Centre bulding? I know they rushed it at the end, and now it is leaking like a sieve.

tintin and the wild weather

No problems LMT, just thought it was a bit unfair to portray 2CC as having no local content…I saw the joke, but that was only because I know something about the topic.

I over reacted, so I’m sorry too.

And Johnboy, not true, there are many fun and entertaining things worth a chuckle or more on talkback radio to my mind…would hardly be worth listening to if there wasn’t something entertaining mixed in with all the serious stuff.

Looks like I’ve hijacked another thread…please ignore me and carry on with storm discussion.

I never laugh at talkback radio

Talkback radio is no laughing matter to SGS LMT.

Hey SGS, lighten up! It was meant as a bit of humour (okay so my sense of humour needs a bit of work). I’m sorry it has offended you so greatly.

la mente torbida, why I bother to respond to you I’ll never know, but for your information 2UE in Sydney (and therefore 2CC here in Canberra) were taking plenty of calls from people (myself included) about the storm after 11pm. 2CC’s local coverage started at 5:30.

Apart from that, I live in Reid so the chances of me not knowing there was a storm even if I didn’t have access to the media is minimal…and a quick look at my website would have confirmed that. Scroll past the photos and you will see my small effort to keep my readers updated on the storm.

If you’re going to insult me about which radio station I listen to, at least have a vague idea about what you’re talking about first.

ESA were impossible to get thru to on NYE also.

Another ESA stuff up. Lucky for them – Stanhope will be the fall guy for them again (ala bushfires 2003).

I was amused to hear on the radio that “only 100 people” called them last night. My wife, with baby screaming in fright, failed to get them to answer for 45 mins (ie if you’re going to be an Emergency Service – at least scale for an emergency). In the end she gave up and helped me bail out the garage and living room from knee deep water.

just had a quick look at the piccies
holy bejeesus!
just glad it didn’t storm like that on Monday night, I would have never gotten ‘home’.
Stoopid airport delays.

well that was short and sweet. maybe it will hit hard later this evening.

Prince’s comments aren’t surprising. Put it this way – the local weather bureau office was closed (Sydney was on call), most newsrooms were unmaned, and the ESA made a call which I’m sure they’ll regret.

I work in a restaurant at the ANU, and we were open today, but nearly every skylight in every bulding has been smashed in, and several roofs, including the brand new one built after the fire at the Research School of Chemistry, and parts of the chifley library have actually collapsed under the weight of the ice. Known damage estimates have already resulted in multi million dollar repair bill, and more damage is still being discovered. Students in some courses, possibly all can expect to be off classes for the rest of the week. (but if you don’t show up and get in trouble don’t blame me)

There has been some who wish to (not) blame this on GW. How to tell is if it is bad then certainly we are to blame for our wicked lifestyle. Personally I think that shit happens and we try to just cope with it.

Fhakk, I dunno about “couldn’t get through”…From ABC News article:

“Meanwhile the acting Commissioner of the Emergency Services Agency (ESA), David Prince, says the ESA failed to warn the public in time of last night’s storm.

Mr Prince says the ESA was notified of a severe storm just after 9pm AEDT by the Bureau of Meteorology, yet failed to issue an general public alert till later.

Mr Prince says that the ESA was occupied trying to get crews out in time and he accepts that a warning should have been issued earlier.

“The officers that were on duty made a decision not send it out at that time,” he said.

“I have spoken to them they have in my view erred from our practices so we just have to make sure we improve that in the future.”

The ESA has warned of the possibility of another severe thunderstorm in Canberra this afternoon or tonight.”

Meanwhile, Bungendore’s getting a bit right now, with several (less intense-looking so far) cells moving in on Canberra from the NW.

The new SES phone number got a bit of a work-out – the overflow (so to speak) went to the ACT fire brigade after Canberra Connect got inundated with calls.

Roger Mungummary - 5 hours ago
Hell no, nobody needs another fast food Macca's flogging greasy unhealthy garbage food View
Johnathan Davis for Brindabella - 7 hours ago
I hear you Andrew. Jobs are important. I worked in retail and hospitality when I was a teenager and I know how valuable I fou... View
Robert Knight - Canberra Progressives for Murrumbidgee - 7 hours ago
The thing that sticks out for me is the value to the community the tavern appears to be provide - i.e. a place where people c... View
News 6