A great tragedy as fire engulfs the Polo 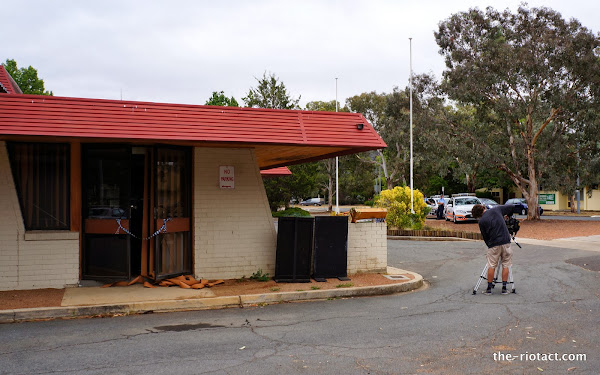 ACT Policing is investigating a fire in O’Connor which occurred in the early hours of this morning (Tuesday, January 21).

Around 2.05am, police responded to reports of a structure fire at the Polish White Eagle Club on David Street in O’Connor.

On arrival, police located a significant amount of smoke coming from the rear of the building.

ACT Fire and Rescue extinguished the fire, however were unable to conduct a thorough investigation due to the area being deemed unsafe.

Police are appealing for anyone who witnessed any suspicious activity in O’Connor early this morning to contact Crime Stoppers on 1800 333 000, or via the Crime Stoppers website at www.act.crimestoppers.com.au.

Information to Crime Stoppers can be provided anonymously.

It’s just been confirmed as suspicious. A safe and cash register were stolen.

Whoever did this is an absolute low-life. I hope they catch them soon.

Any further updates on the condition of the building?

Nope, I said exactly what I meant.

It’s not a hideous monstrosity constructed from concrete and glass It’s an old building with character and life. This town is too quick to flatten anything and flog it off for the highest dollar.

One day someone will look around Canberra and ask, where are all the old buildings? Where is the history?

That will be a sad day.

… you mean by putting a chain wire fence around it and leaving it to rot for the next decade?

This building had terrible internal design. Like the person was drinking vodka. Not good potato vodka, I mean the gut rot stuff.

But the kitchen had the best pierogi!

I read this headline and thought my car had exploded.

Echoes of the former Finnish Club of Jamison. I hope the Italian Club sprinklers are in good working order.

I’m hearing the fire was confined to the kitchen. Which would explain the smell of burnt pork knuckle over O’connor this morning.

Maybe it was the German Club.

Its Poland. It could well have been the Mongol, Turkish/Ottoman, British, Russian, Swedish, Lithuanian, Prussian, Cossack Slovak or Soviet clubs. And probably a few others.

My reading of the CT story on the dispute was that it didn’t involve the Polo at all, they just posed for the photos there.

Yeah, I think you’re right, and bit dodgy of the CT to do that. I know when I was last interviewed (not by CT), schedule meant had to do it somewhere totally unrelated to the story or me so they made sure to put the background out of focus and not have anything too identifiable that may imply otherwise.

Maybe it was the German Club.

The article in the Canberra Times is about the Polish Ex Servicemans Club that used to be in Civic next to the RSL. That premises lease to RSL & eventual sale raised the funds that are in dispute. It has nothing to do with the Polo other than the meeting that was held there. There could be many reasons for fire in the building, let’s wait for the appraisal?

If it’s all okay and just needs a clean up, sign me up for the Working Bee.

I am obviously not the only person to cycle down today and think ‘Oh well that doesn’t look too bad from the front’. But the smell is horrible, and it’s structural damage inside that counts, I suppose.

I hope so much that it can be repaired.

Although I can’t get there as much as I’d like I feel a real affection for that building.

I am biting my nails for a statement of the damage.

Silver lining, I certainly can use the grooming.

I agree that siblings should be given preference. Could think of nothing worse than having to drop off kids at two different centres.

Whoops, posted this in the wrong thread. Sorry.

I agree that siblings should be given preference. Could think of nothing worse than having to drop off kids at two different centres.

Shaun Hazell - 1 hour ago
Its the most evil way of killing creatures and should be outlawed as it is most countries. View
Cary Elliot Johnson - 15 hours ago
Chele Forest lol. It’s banned in every other Country because every other Country doesn’t have native Australian animals o... View
Cary Elliot Johnson - 15 hours ago
Missy Jangles you do know where the poison is derived from and why it was chosen don’t you? View
News 54

OldMan Wyatt - 8 hours ago
I have always preferred chocolate rather than seafood at Easter View
FishCo Fish Market - 9 hours ago
Thank you for your lovely feedback. Anna truly loves what she does and this will mean a lot to her. :)... View
Michelle Littlewood - 12 hours ago
FishCo Fish Market Thank you for your fantastic service and exceptional seafood. Anna was wonderful when placing my order, an... View
News 32