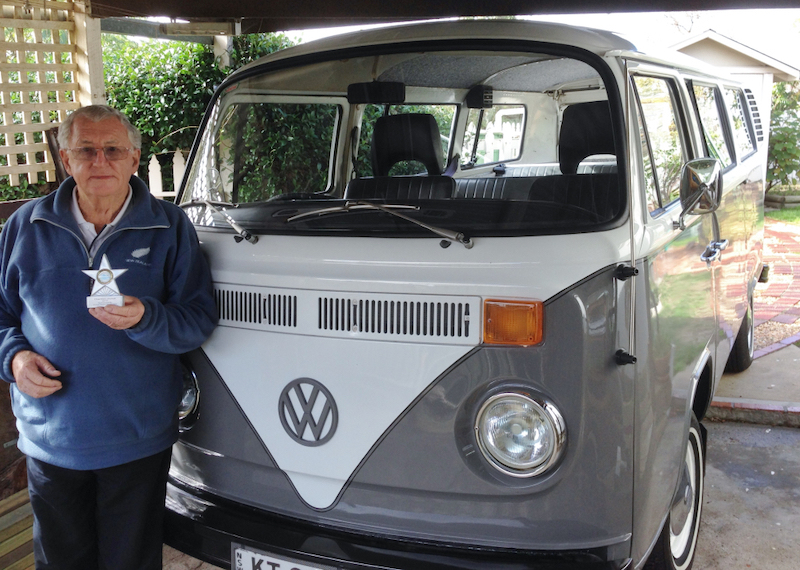 Kevin Thompson of Goulburn stands in front of his pride and joy, a 1973 two-tone Kombi. Photo: Supplied.

In 39 years of climbing the Clyde and Brown Mountains, rumbling up the Hume Highway to Sydney or in the opposite direction to Victoria, and carrying Kev and his family around town, this gleaming 1973 Series 3 Kombi has shown spectacular reliability, only breaking down five times.

His interest in Kombis stems from his brother-in-law Allan Apps, a VW mechanic who collected old Kombis and helped Kev restore the rusty, stripped out, former builder’s van. They re-upholstered the seats in two-tone grey, lined the interior with insulation and carpet, and reworked the 1600cc motor.

“It’s only got about six grease nipples on it,” says Kev, also a mechanic. “It‘s amazing how a small motor being air-cooled can pull a great body like that along. We took the muffler off it, put extractors on for a bit of a burble noise, it drags the exhaust out a little bit quicker, gives it a better performance.”

It has certainly done some miles.

“I could hop in it and head anywhere. You have to nurse it along, we only travel about 90 kilometres an hour in it because this preserves the life of the motor. We used to put all our luggage in the back to build up the floor to the top of the back seat for a little bed and we still had the driver and passenger seats. It worked out really well for us. If you were tired you had a lie down.”

For many years the van remained original white until their daughter, by then grown, noticed that Kev often toyed with a tiny grey and white model Kombi he kept in the glovebox.

“We were going on holidays about 12 or 13 years ago and our daughter said to Bev, ‘Leave the keys of the Kombi out and don’t tell Dad.’ We came back after a couple of weeks and they’d had it sprayed two-toned, just like the model,” he says.

The resplendent grey and white van and its custodian now hit the road with the like-minded motorists at the Goulburn Veteran and Vintage Car Club, where Kev is on the events committee. He draws up schedules of one, two or three-day journeys to the Southern Highlands, South Coast, bluestone villages around Crookwell and beyond for the members and their collection of character-filled automobiles.

The cars also call at schools to put on pre-arranged displays for the children. Ignoring the teachers’ ‘Look, don’t touch’ instruction at Goulburn’s Bourke Street School one day, a young boy asked Kev if he could sit inside.

“I said, ‘Yeah.’ I turned to talk to someone else and turned around again and there are 22 kids in the Kombi,” he chuckles.

Early model VW Kombi vans, especially in the condition of Kev’s, can fetch $150,000 to $200,000 at auctions these days. A man once walked into the Nerriga pub after spotting it and offered him $30,000. At a rally near Merimbula, a woman insisted money was no object. But Kev’s Kombi is not for sale.

For him, the camaraderie, the roads travelled and the memories it has provided have made it priceless.

As a case in point, Kev says for last year’s 150th anniversary of Goulburn celebrations, he and Bev dressed up as hippies and covered the Kombi in bright flowers.

“I had the window down, we stopped for a moment near Belmore Park,” Kev says. “This old lady was sitting in her wheelie seat, she would be 90 if she was a day, she stuck her fingers up in a V salute and said, ‘Peace Man’.”

And you can’t sell a Goulburn icon.

Microbuses in Europe and England but they have always been VW Kombis in Australia.

Not the best with babes and little people I can vouch for that! 😀

Slavoljub Zivanovic should have kept your bright yellow one!

Antonio Schaivello, interesting read for you 🙂

Cathy Landon dont you guys have one?

Ash Pagett better investment than the Stockmarket at the moment!!

Great story! My Dad had a Kombi and I remember how all Kombi drivers would wave at each other as they passed.

HiddenDragon - 8 hours ago
"The ACT needs home-grown solutions that fit with its culture and the aspirations of its people and origins, not imported min... View
Gabriel Spacca - 11 hours ago
Well I feel sorry for those who are coming here to escape the anthills of Sydney and Melbourne. The current government is try... View
Marc Edwards - 13 hours ago
Ian Bushbell is about 50+ years to late View
News 11

HiddenDragon - 9 hours ago
In light of this - https://the-riotact.com/act-government-systems-not-rated-to-receive-security-classified-information/430823... View
Acton - 13 hours ago
You hope. I admire your trust in the efficiency and perpetual good will of an indulgent government. However, you have forgott... View
Acton - 14 hours ago
“Those who would give up essential liberty to purchase a little temporary safety, deserve neither liberty nor safety.” Be... View
What's On 5