The other night JB enthusiastically asked me if I wanted to go to the Electric Shadows screening of the Rocky Horror Picture Show. Being a [Rocky Horror] Virgin, I agreed without really being sure what I was in for.

We arrived early to ensure getting tickets and drank a beer, watching as people wearing exciting costumes turned up. 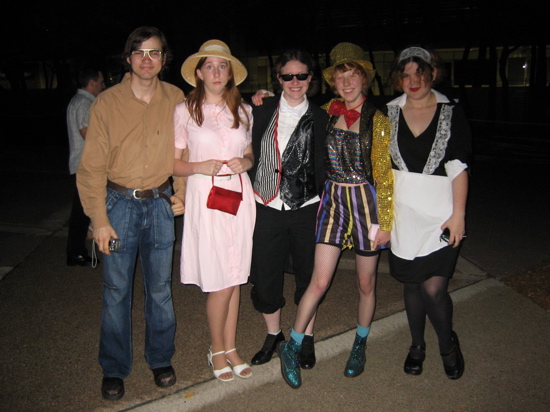 The majority of the crowd, particularly those dressed up, was older women; although there were a surprising number of young people (including a very enthusiastic pair of girls, made up as Riff Raff and Magenta, who looked all of 12 and knew the movie backwards).

The show was introduced by Simon Weaving, the CT’s new film critic, who also conducted a brief best dressed competition. The movie print had so many artifacts it looked as if it must have been one from the orginal 1975 run.

I had been told be several people that the movie was “…odd” and I agree with that assessment. The crowd participation was fun, though I did wonder how it got to be so regimented (Wikipedia says it just kinda happened) and I wasn’t so sure about getting wet. I did notice that there seemed to be a lot more participation stuff in the first half of the film than the second half and wondered if any others got a little sleepy like me (though that is just my habit). There was one guy who ad libbed quite a lot of (mostly funny) responses until someone up the back of the theatre heckled him.

The finale seemed kind of poignant with Frank N Furter looking so wet and forlorn, but given there’d been no real character development (or much real plot) it just was kind of like noticing a lost dog as you drive past. That said, the upbeat rock numbers kept bringing me back out my sleepiness and making my toes tap and it was a fun night.

I remember doing exactly the same thing in the early 80s, then walking down Northbourne Avenue pissed whilst people beeped their horns…

Hello. I think I’m the odd one out here, since I’m not from Canberra and not even from Australia. 😉
But I liked the comment about Simon Weaving, and I’d like just to say that it’s so bad that the CT doesn’t put film reviews on its web site: I only found his review about Saw III by now, which I liked very much (the review, not the film 😉 )
Well, I hope that Simon becomes a great filmmaker (I’m sure he can); and I’d really like to see Hugo acting in one of his films. 😉
(Blue tails and red bowtie? lol!)
Oh, I’m really off topic. Sorry.

I’m sorry I missed it, having been a enthusiast of the Friday Night Rocky Horror at Sydney Hoyts, long ago…..

He was wearing blue tails and a red bowtie.

Simon’s a good lad. Been writing CT film reviews for about a year. Won best director for a short in this year’s ‘Lights Canberra Action’. A true Weaving. Wuz he in costume too?

memories, too right. We used to go to the midnight screenings when I was at school! (very early 80s), with our costumes, rice, ciggy lighters, toast, rubber gloves… act the whole thing out, do the audience responses, the whole deal. And now a whole new generation are doing it! (gets walking stick and totters off to make a cup of tea).

I really expected this photo, I was at work all night. But this is a bunch I went to school with. they truly do now the movie back to front. Nice to see they are all still around. Cheers for the memories.

Stephen Dixon-Jain - 6 hours ago
Thanks for the suggestion, Julie. I've just adourned our letter box with the colours of the Aboriginal flag. Stephen View
Julie Macklin - 8 hours ago
People crowded together. Unbelievably irresponsible. There are other ways to make the point, and a more permanent point to re... View
Community 14

@The_RiotACT @The_RiotACT
For Our Country, the Australian War Memorial’s Aboriginal and Torres Strait Islander memorial, has taken out the top gong at the ACT Architecture Awards on Friday night, winning the prestigious Canberra Medallion. See all the winners https://t.co/dKch27SZqs (41 minutes ago)