You deserve it
The Audi sales event is now on

A true Lifeline for the Canberra community 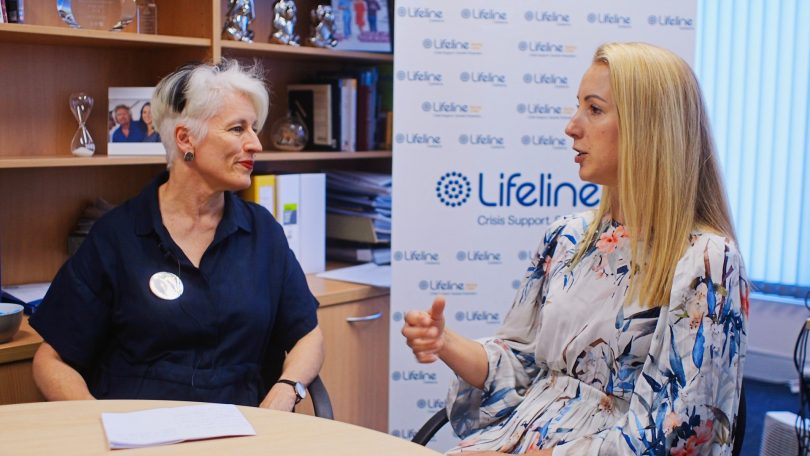 Lifeline Canberra CEO Carrie Leeson reflects on the impact the support service has on the community. Photos: George Tsotsos.

“There’s a lot of laughter and a lot of tears in this office, but when you are in the privileged position of being able to leave the community better than you found it, it’s a wonderful feeling.” Carrie Leeson is the CEO of Lifeline here in the ACT and she’s reflecting on what might seem at first glance an unlikely source of feeling good – offering a 24-hour crisis service to people in the depths of despair.

Lifeline operates whenever the phones ring, from anywhere and at any time, and no matter how desperate the situation. Leeson herself began as a volunteer on the phones and board member before she took on the CEO role. The organisation has 13 fulltime staff and more than 800 volunteers.

“Volunteers are exceptional people,” Leeson says. “On top of their day jobs, they spend hours on the phones, sometimes in the middle of the night. You never know what’s on the other end. You might have a lady who’s lost everything to a scammer, a child in the middle of a domestic violence situation, a parent thinking about suicide.”

Genevieve Jacobs meets CEO of Lifeline Canberra, Carrie Leeson, for a chat about what's happening behind the scenes of the 24-hour crisis service. Click play to learn more about how to become a volunteer, discover how you can support the valuable work of the organisation and hear all about Lifeline's key fundraising initiative, the annual gala ball.

But, Leeson says, what volunteers do have is professional training, empathy, a strong skill set and the knowledge that they can make a difference.

Where there are immediate safety concerns, Lifeline contacts emergency services and works with them to secure individuals’ safety. Leeson says as the supporter, “you’re picking up the cues, validating feelings, maybe challenging some thoughts but supporting them into what they do next. Sometimes it’s just being safe for the next ten minutes, sometimes you can contract stay safe until they see their GP.

“If someone is in a crisis, they have the blinkers on. It’s all they can see. A crisis supporter can take them up and above the situation and give them a helicopter view of what they could do next. But what still surprises me at the end of most calls from people who are in absolute distress, that so many callers thank you. You think – how do they even have that capacity?” 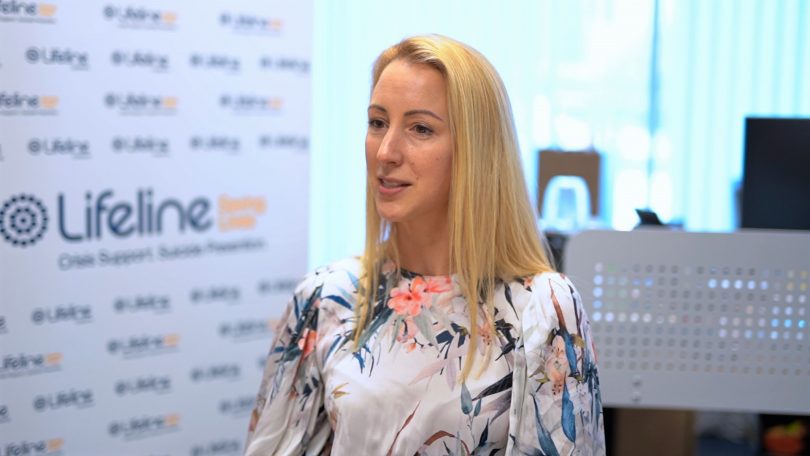 Lifeline volunteers provide a helicopter-view of the services that are available for people needing support.

Australia’s suicide rate is the highest its been in a long time. In Canberra, it’s increased by 107 per cent in a 12-month period. There are around nine suicides a day nationally, but Lifeline also puts in place daily 120 interventions and safety contracts. “Without individuals having that intervention, the suicide toll would be much higher. The impact of what we do is immense,” Carrie says.

Lifeline invests considerable time and effort in the 100 people per year who go through their fully accredited training process. Leeson says volunteers need to be honest with themselves about their own wellbeing, the need to debrief and take care of themselves. Lifeline provides that support to everyone who works with them.

“Most people say it’s helped them hugely outside the phone room with their own relationships with neighbours and friends,” she says. Volunteers usually spend two to three years with Lifeline although one volunteer has spent 20 years on the phones, and there’s a 40-year volunteer for the Book Fair. Leeson says it’s OK when people leave because those skills remain in the community at large.

But that also means there is always a need for new volunteers and for community support. Among the new initiatives, Lifeline will bring online this year is a world-class Canadian training programme for first responders, meeting their specific and often urgent needs for help. That’s the result of a generous private donation.

Lifeline receives minimum government support and the annual Lifeline gala is a very important part of their funding efforts. This year’s glittering black tie event is being held at the National Arboretum on February 22, with a theme of “In The Clouds”. Tickets are $300 per person or $3,000 per table of ten.

Proudly presented by Audi Centre Canberra, it’s always an unforgettable night with international entertainment and inspirational Australians. Carrie Leeson won’t divulge who the speakers are at this stage but she’s promising stories that will move and inspire guests. But could they be any more inspiring than Lifeline’s own story?

Jess Thomas - 7 minutes ago
David Deb Cossart that's the thing: people who can afford the fine can afford to speed. Changing this would mean that no-one... View
Liam Searle - 46 minutes ago
Make the speed limit suit the road, change it back to 60! View
AliciaAnn Dowd - 4 hours ago
Werner Schenk I agree with you. There is already a system in place to assist people manage payment of their fines. SPER allow... View
Community 41

chewy14 - 21 minutes ago
No, To be honest, It's because I think you're uniformed on the scope and causes of the problem, the research that has been oc... View
bj_ACT - 2 hours ago
I’m not just criticising this project from 2014, I’m criticising two decades of broken promises, failed projects and the... View
bj_ACT - 2 hours ago
That’s because you think the efforts on Lake Tuggeranong have been a good. View
Property 1

Sam Oak - 28 minutes ago
The government needs to stop fluffing about trying to figure out how to get the tram over the lake and build the Belconnen to... View
Community 10

Jennifer Albs - 1 hour ago
He is great player and pretty talented man, but his behaviour over shadow everything and not to mention mode swing, plus acti... View
Stewart Mcdonald - 1 hour ago
Lucy Humphreys I love the game but the sterile personalities bother me I think the game representing different social groups... View
Ken Behren - 4 hours ago
He is great for the game... work in progress, yes, but does anyone remember a doubles match that exciting and entertaining? R... View
Food & Wine 5

Tamara Lions - 5 hours ago
This is lovely. But can we do something about the schools in the inner North please. Dilapidated old buildings, dusty, dirty,... View
News 1

Stephen Saunders - 6 hours ago
Noble sentiments. The reality is that politicians and universities are fully committed to a rapid return to the "export indus... View
Opinion 2

papajohn - 7 hours ago
As a 62yo who has been listening to the J's since Double J first launched in Sydney, it is all part of the evolution. They ev... View
show more show less
*Results are based on activity within last 7 days

Crisis support needed more than ever at Christmas time

@the_riotact @The_RiotACT
The announcement of a new national Holocaust #museum in #Canberra comes in the wake of a report that reveals almost one in four Australians over 18 has "little to no knowledge" of the #Holocaust https://t.co/ojjuaIjCrz (25 minutes ago)