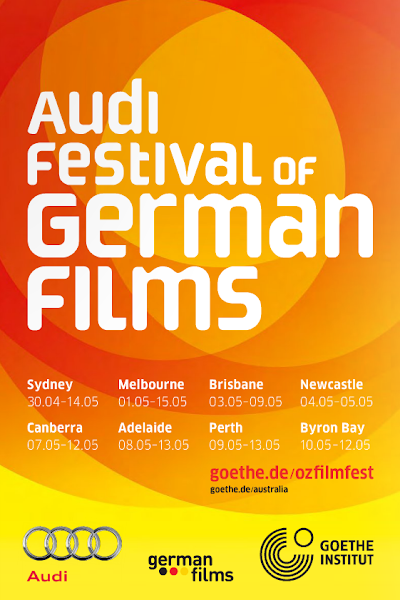 Word has reached us that the Audi Festival of German Films 2013 is coming to Palace Electric.

Presenting a wonderfully audacious collection of contemporary German cinema, the 12th annual Audi Festival of German Films celebrates the rich diversity of one of Europe’s most dynamic and creatively renowned cultures.

Presented by the Goethe-Institut in association with German Films, screening partner Palace Cinemas, and the generous support of Audi, the Festival will take place across 8 cities throughout the first two weeks of May, and in Canberra will screen at Palace Electric Cinema from Tuesday 7 to Sunday 12 May, showcasing 16 of the event’s key titles.

* Original headline was Achtung! Das Festival des deutschen Films ist nach Canberra kommen! (translation via Google Translate) but the organisers asked for the new one instead and who are we to risk their ire?

Yay, I love the German film festival! Though, I really wish we would get a better spread of films to Canberra though. I thought last year’s selection was decent, until I saw what was showing in Melbourne & Sydney.

Get the Australian (from) my fender.

Seriously though, it’s a shame we’re only getting a subset of the available films. 🙁

There is sauerkraut in my lederhosen.

SP Brogues - 3 hours ago
Barr will approve no doubt because well you know Geocon and him are best buds. View
Phil Hopkins - 17 hours ago
Enough!!! View
Motoring 9

Bec Kelly - 8 hours ago
I think the issue is that the Canberra Times wrote the article - they are after a head line and people to pay for their subsc... View
Business 9

Steve King - 12 hours ago
Rip Mark he was nice guy always welcoming my condolences to all his family View
Catherine Seaglove - 13 hours ago
RIP Mark What a rugby player he was !... View
News 26

Explosive claims from a leaked internal document about the Emergency Service Agency's handling of the recent bushfire season are "totally...
News 1

Swimmers will again be able to take the plunge at two government-owned pools this month under the Phase 2 easing...
Lifestyle 12

The man known as "Witness J" was tried, sentenced and jailed in total secrecy, during one of the most extraordinary...
*Results are based on activity within last 7 days

@The_RiotACT @The_RiotACT
For the first time in months, the RiotACT #GigGuide includes gigs that you can actually attend in person as the city slowly begins to open up again https://t.co/FfivcUcpXv (8 hours ago)

@The_RiotACT @The_RiotACT
As temperatures fall, fire risks rise. @ACTFireRescue has reminded Canberrans to be fire safe as we unpack our electric blankets and plug in heaters https://t.co/913CVlZIvu (9 hours ago)