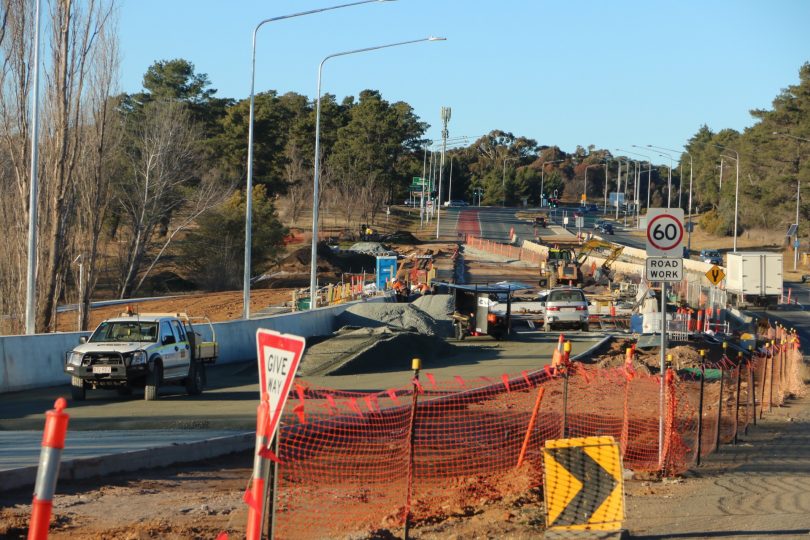 The Budget includes funding for the duplication of major roads in Canberra. File photo.

Canberra drivers will benefit from some major roadworks funded in the ACT Budget that should cut their travel times.

There are three major roads to be duplicated – Athllon Drive, William Hovell Drive and the major arterial road between Belconnen and Gungahlin.

The budget will fund the continued planning to complete the conversion of Athllon Drive to four lanes from Hindmarsh to Drakeford Drive.

Chief Minister Andrew Barr says the Territory government will forge ahead with infrastructure spending plans despite the coming deficit. But crunching the numbers is a challenge post Federal election.

In partnership with the Commonwealth, the Government will start the second tranche of work to replace bottleneck intersections along the Monaro Highway, working towards a consistent and safe 100km/h highway. This includes the design and construction of significant intersection improvements along this corridor between Pialligo Avenue in the north and new overtaking lanes at the ACT border in the south.

A range of intersections across Canberra will have new traffic lights.

In Belconnen, Southern Cross Drive and Starke Street and Belconnen Way and Springvale Drive will be signalised.

In the south, Kent Street and Novar Street intersections will have lights to improve traffic flow for commuters travelling from Weston Creek to the City as well as residents and businesses in Yarralumla and Deakin.

There will also be improved pedestrian and bike paths through this intersection.

Additional safety upgrades at Sulwood Drive will support the new carpark at Mount Taylor, including road widening and a turning bay.

A scoping study will determine how to make the Hume Circle roundabout at Wentworth Avenue and Canberra Avenue safer.

The Government will adopt a preventative resealing model, with at least five per cent of the Territory’s road network to be resealed every year.

It will also build a new park-and-ride facility on Well Station Drive in Gungahlin to support the large numbers of people using light rail in Canberra’s north since it launched in April this year.

Scott Bell - 5 hours ago
Ya all Dreaming tax man rules who gonna pay for the Friday’s View
Karen Feng - 8 hours ago
4-day work week. Those that meant 3 of those days are double pay. or does it meant we are paid one day less View
Bianca Rossetti - 9 hours ago
I prefer more flexibility options rather than stating 4 days working.. nsw are looking into school hours changing, maybe this... View
News 8

Tina Edwards - 6 hours ago
They only upgraded it a year or so ago!!🤔 View
Community 3

Maya123 - 7 hours ago
Added: I did some research on this. "Trees listed on the ACT Tree Register are protected. They cannot be cut down or altered... View
Maya123 - 7 hours ago
I wonder if being heritage listed gives extra protection to street trees, or not. View
ChrisinTurner - 9 hours ago
Unfortunately street trees are not covered by the Tree Protection Act as demonstrated around Civic recently. View
News 19

chewy14 - 9 hours ago
Ian Lindgren, Of course you are correct. But that won't stop people continuing their whinging that doesn't actually address a... View
Ian Lindgren - 11 hours ago
The AWM Redevelopment Project will go ahead and the two high level reasons that it will are that it is based on need, and tha... View
Food & Wine 29

Patrick Bugg - 12 hours ago
Ammie Ashford, Mark Ashford, Tim Thicknesse, we will have to put this on the list for the kids View
Opinion 136

It’s taking longer for Canberrans to get to work, according to new data