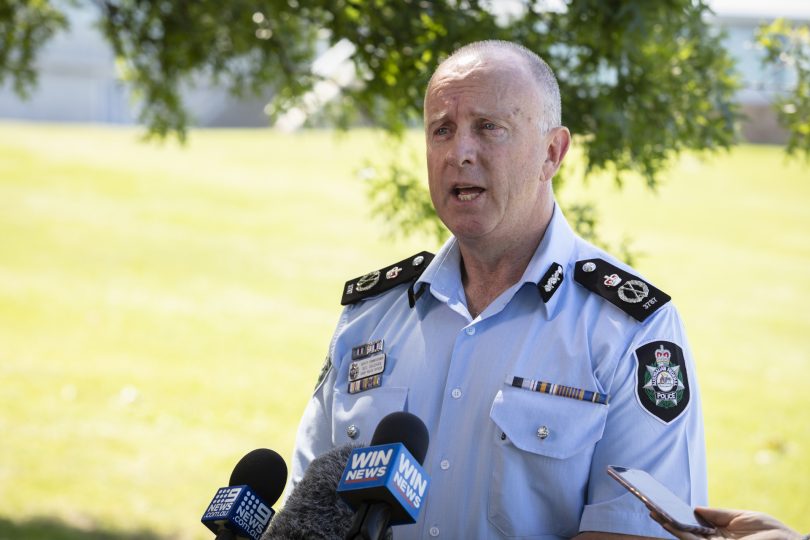 ACT Chief Police Officer Neil Gaughan says 2021 has been a year punctuated by COVID-19, but also an incident where police officers were run down while conducting a routine traffic stop in July. Photo: Thomas Lucraft.

For the ACT Chief Police Officer Neil Gaughan, it’s been a year busier than most.

During COVID-19 lockdown, as the person in charge of the team enforcing COVID-19 compliance rules, he became a familiar face at press conferences, although ACT Policing took an ‘educative’ approach where they could.

He’s also dealt with the ripple effects of seeing his own officers targeted in a violent incident.

And the year didn’t pass without a bit of controversy, either.

Here he reflects to Region Media about the year that was.

The moment that defined 2021: I think without a doubt it has to be COVID-19 and our police response to that. But the other moment which sticks out for me was when three of our officers were struck down by a vehicle while conducting a routine traffic stop [in July]. For a while there we thought that particular incident could have had a much worse ending than it did. 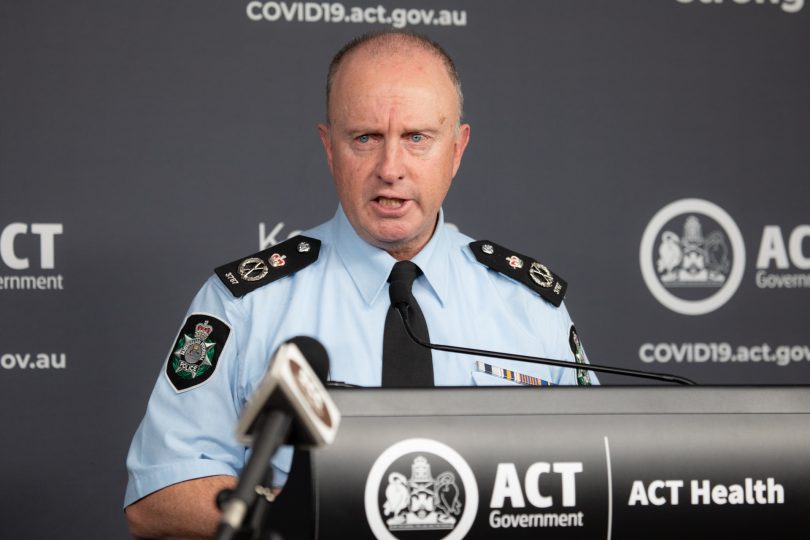 During Canberra’s COVID-19 lockdown, ACT Chief Police Officer Neil Gaughan was at many of the press conferences to provide an update on compliance. Photo: Michelle Kroll.

The biggest lesson learnt: I think you learn every day in this kind of role and if you don’t, you probably should give it away. But a lesson I keep telling myself is that I have to be really clear about what I say and the way I say it to the media.

Nothing against you guys, but something I say that is taken by others in the wrong way. A recent example is an issue that got a bit ahead of itself until it seemed ACT Policing would not be going to burglaries anymore, which is not right.

For me, it’s just about being concise and clear in my communication to the public.

What 2021 taught me about leadership: Clearly defining my expectations is something I’ve got to continue to get a little better at. Explaining why things have to change is important because change can be difficult. As a leader, you’ve got to be clear about what you’re hoping to achieve with changes.

Highlight of the year: Professionally, it’s the way all of ACT Policing has responded to everything that’s been thrown at it. We talk in the media about what we can talk about, but there’s also the underbelly of the Territory that we don’t talk about, but our officers respond to that daily.

Personally, I’m just glad we are in a position again where we can go out and spend time with friends and family, and go out to dinner. I’m quite a social person so that’s been great. 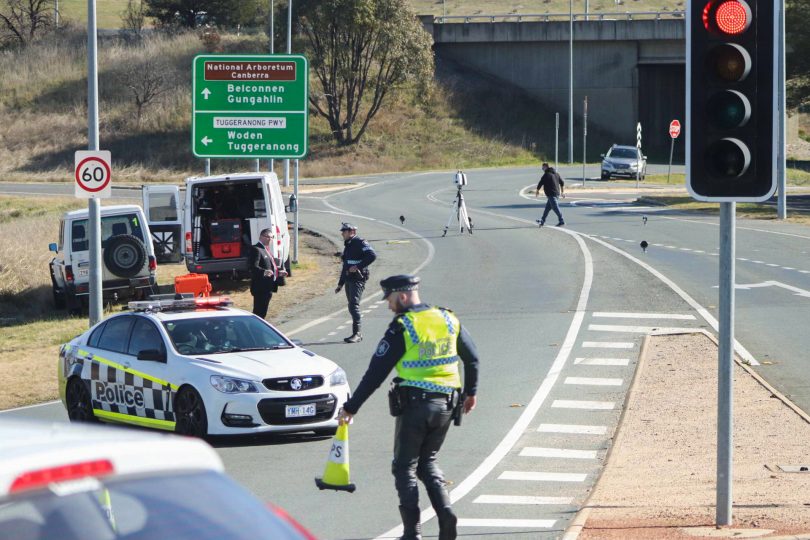 ACT Policing investigates after the crash in July 2021 in which three officers were hit during a routine traffic stop. Photo: Damien Larkins.

The hardest thing that happened in 2021: Again, I’d say those officers getting hit by the car. One thing I dread hearing is that officers are injured. They have made a full recovery now and I thank all of their families who helped them through that.

It’s been a hard year, and while we’ve still got a little way to go, we are getting there now.

Something I’m proud of: I’m proud of the fact that as I get to the latter half of my career, after almost 40 years of policing, I get the opportunity to come back to where it all started with ACT Policing and lead the force during a pretty challenging time.

It’s something I’m sure I’ll look back on when I’m sitting in my rocking chair sipping my Scotch.

But I’m also really proud of the ACT community in how it responded to the COVID-19 pandemic and the lockdown. Our high vaccination rates and our ability to move around so freely is testament to that.

What I wish I did differently: I think it’s that communication issue again. We can always do better with the way we get our messages across.

My New Year’s resolution: Exercising five times a week as I’ve got to lose some kilos.

What to expect from 2022: We will keep working to keep the community safe. I hope that everyone takes the chance to have a bit of a rest and spend time with their friends and family during the break after the year we’ve had.

Nada Krstin - 3 minutes ago
Corey Karl I doubt people have stopped reporting crimes/burglaries, even if now necessary to do online as you still need this... View
News 245

Andrew Early - 27 minutes ago
Elaine Staples no Elaine…. Worst tree EVER. View
Lucy Doan - 30 minutes ago
Funny thing is that the planners never plant in their areas such as inner south or inner North, they plant these trees in poo... View
Steven Miller - 54 minutes ago
Lorraine Burford well that’s all an option! 🤣 View
Food & Wine 9

Vicky Myors - 28 minutes ago
So cute how you had chickens in the back if your ute View
Vicky Myors - 32 minutes ago
Paul I watched your show tonight for the first time .Very impressed you do a fab cook up . keep up the good work.I will be wa... View
News 45

Diane Tait - 37 minutes ago
Sue Danaher we have had this system for 7 years since we moved to Lake Macquarie. At this time of year we could do with two g... View
kenbehrens - 52 minutes ago
Those government claims also assigned a dollar value to the 30% food waste. When I calculated back the "average" weekly food... View
TimboinOz - 4 hours ago
We have two large grey-black recycled-plastic worm farms. Much less work than composting, no turning, effectively zero smells... View
Sport 2

Hillbilly - 41 minutes ago
Both firmly in the pantheon of the greats and both made huge contributions to Canberra. Best wishes to them. View
Community 96

Mick Brennan - 44 minutes ago
Kris Peralta diff events View
Katarina Vucic - 45 minutes ago
Just let people who enjoy to have it simple stop making world too safe let some steam out View
Scott Norman - 48 minutes ago
Toni Isaacson who is us? View
Lifestyle 7

thea - 57 minutes ago
We want more of Geoff’s work in ACT please! View
Rebecca Mosher - 3 hours ago
Such an amazing artist View
Lifestyle 30

Futureproof - 5 hours ago
I am in isolation for the second time in two months. Like the last time, I am not feeling the best. No RATs available, PCR dr... View
Food & Wine 16

May Welland - 7 hours ago
Nope, i dont have dogs. They seem to frighten the birds though. I live under the flight path so have 10-15 drones flying over... View
show more show less
*Results are based on activity within last 7 days

Police warn businesses they have no COVID excuses now

Efficiency or a ‘green light for criminals’? Police to phase out attending some property crimes

@the_riotact @The_RiotACT
The @acccgovau is investigating reports of #rapidantigentests being sold for "outrageous" prices. But #Canberra pharmacies say their big concern remains supply and they welcome the scrutiny https://t.co/OLkQPnSfWa (58 minutes ago)