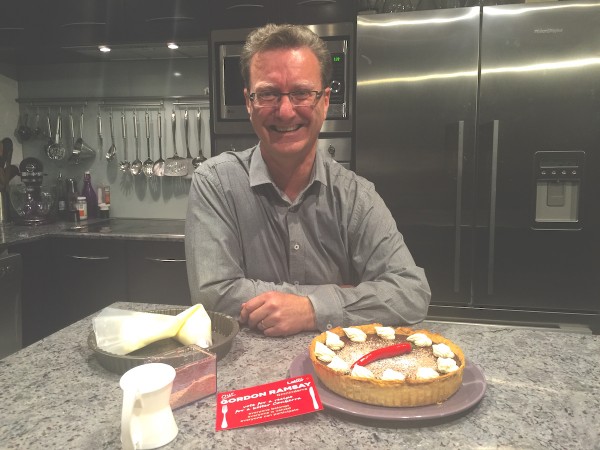 Given the theme is culinary this time, where better to start the RiotACT ACT Election Candidate Challenge than at Gordon Ramsay’s place?

No, we’re not talking about the brash British celebrity chef, though Gordon Ramsay of Latham, ACT, is often to be found at work in the kitchen, inspired in part by sharing a name with a world famous restaurateur.

Corflutes featuring the name of this Labor candidate for Ginninderra and the odd cooking utensil appeared on the side of the road as soon as I reached West Belconnen last night, including this one right out the front of the Ramsay family home: 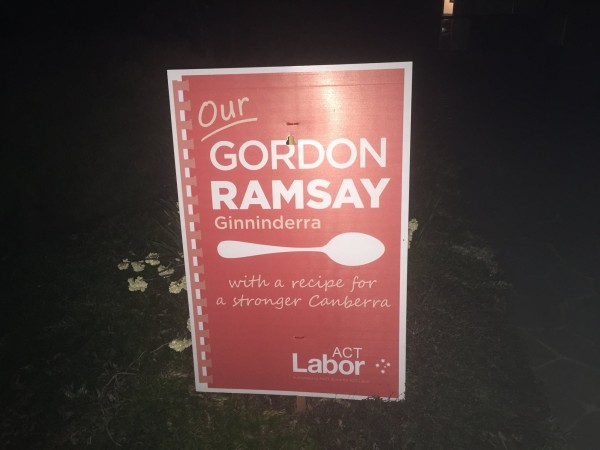 The culinary-inspired marketing material encourages Ginninderra residents to “vote for a recipe for a better Canberra”. No wonder Mr Ramsay was keen to be the first participant in our candidate bake-off. His campaign had been built around the kitchen before the RiotACT even came up with our baking concept.

Having sampled Mr Ramsay’s Dark chocolate, chilli and lime pie, we can confirm time he has spent poring over cookbooks by the likes of Jamie Oliver and the other Gordon Ramsay have been worthwhile. It was just right: not too sweet, too spicy or too sour.

Mr Ramsay nailed the video presentation first time, too, demonstrating that years of experience presenting in front of Uniting Church parishioners will come in very handy in dealing with the media and public speaking. 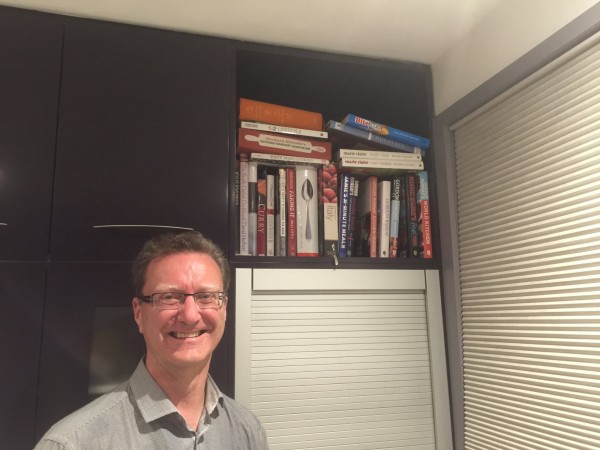 So what is Mr Ramsay’s “recipe” for Canberra, and why does the pie symbolise his vision for the capital?

He describes the pie as inclusive because it brings together and holds together a whole range of ingredients and flavours, as the capital does.

“The pie crust offers good solid, secure housing for the pie, and part of what we need in Canberra is good, secure, affordable housing,” Mr Ramsay says.

The dish in which the pie was baked represented the safety net that Canberra has to ensure residents do not become trapped in poverty.

The chocolate represents the richness of Canberra.

“Then you’ve got the diversity of the chilli and lime,” Mr Ramsay says.

He says the pie represents three simple things that are important ingredients in his vision for Canberra:

Like to try the pie for yourself? Here’s the recipe:

(Based on recipe from “The Four & Twenty Blackbirds Pie Book”, from the Brooklyn pie shop & café) 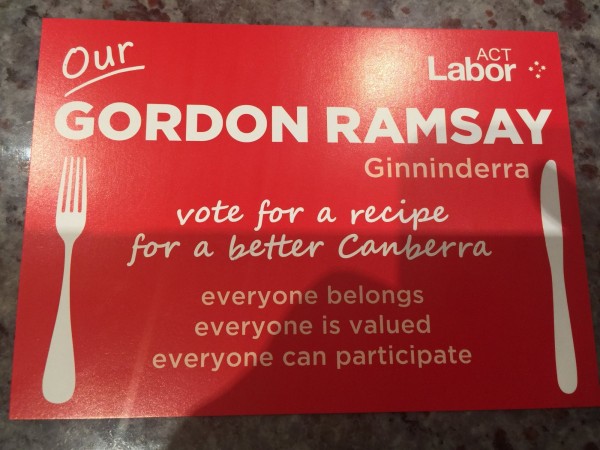 I find it despicable that this candidate is using the fame of somebody who happens to share his name, as a ploy in his advertising campaign. Would the famous chef Gordon Ramsay be impressed that his name has been dragged into the muck that is political campaigning? Talk about a cheap stunt.

Well someone named Gordon Ramsay would know how to cook …

This is so much better than the Lego challenge! Will definitely try this recipe too.