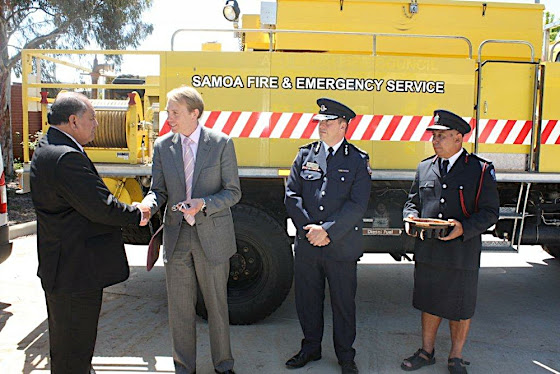 Simon Corbell has announced the handover of decommissioned emergency services vehicles to Samoa:

Minister for Police and Emergency Services, Simon Corbell, today handed over the keys of three decommissioned ACT emergency services vehicles to the Samoan Government to assist in fire and emergency management in the Pacific Nation.

“It is a pleasure to be able to hand the keys of these three ACT emergency vehicles knowing that they will make a real difference to the capability of emergency services over in Samoa,” Mr Corbell said.

“All the vehicles are in good working and roadworthy order despite being past their use by life in the ACT.”

If you read the full release it states that Samoa actually asked for assistance, so unlikely to say no when its given.

It does come across as a very belittling act to our Samoan friends. “Here, have my 20yr old truck… it might have a few oil leaks and not as good milage, but hey it might get you to a fire.”

Well, at least its better than the patrol boats we gave to PNG (not sure which government did that). PNG cant afford to fuel the boats, cant afford to maintain them and dont have enough skilled personnel to use them. Mostly they sit in Port Moresby Harbour, rusting away, and are used as accommadation by the crew.

I’m pretty sure Samoa was happy to receive them. They can say no, they are grown ups.

Having served in Samoa, I think this is a great idea!

If they are in good working order, and are alright for the Samoans. Why arent we still using them?

What andym said. There is nothing “wrong” with a <a href="http://en.wikipedia.org/wiki/Sopwith_camel"Sopwith Camel either, but the RAAF still want better planes. Shame all they’ll get is the JSF.

It does come across as a very belittling act to our Samoan friends. “Here, have my 20yr old truck… it might have a few oil leaks and not as good milage, but hey it might get you to a fire.”

1) Age – Although they have low mileage, they are getting on.
2) Lack of personal protection systems – see 1.
3) We got new ones (Many thanks to ACT tax payer) with excellent protection systems.
4) Room to store them.
5) Crews to crew them.

If they are in good working order, and are alright for the Samoans. Why arent we still using them?

Trish Roberts - 3 minutes ago
Yes. Does not want to hear the opinion of older people. Well, one day, if he’s lucky enough, he’ll get old, too!... View
Business 4

@The_RiotACT @The_RiotACT
“Witness J” speaks to Genevieve Jacobs about being incarcerated with Canberra’s sex offenders, his anger and his fears about our nation’s growing secrecy https://t.co/0X7XNZbVN4 (56 minutes ago)