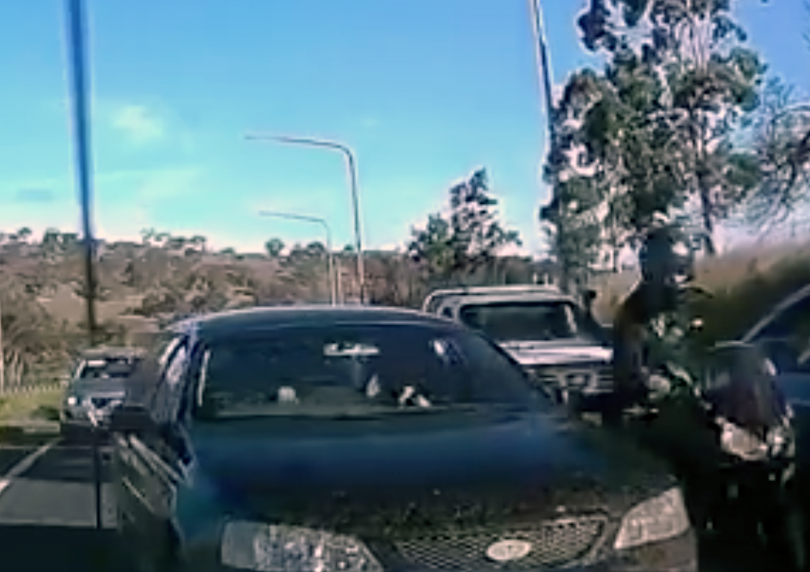 A still from the dash-cam footage of a car appearing to attempt to sideswipe a motorcycle rider on the Majura Parkway last October. The footage was posted on the Canberra Drivers Facebook site.

Police have laid charges against the alleged motorist who was videoed during what appears to be an attempt to sideswipe a motorcyclist who was lane filtering on the Majura Parkway on 30 October last year.

ACT Policing told Region Media that the alleged offender has been charged with ‘drive with intent to menace’ and will appear before the ACT Magistrate’s Court on July 19 this year.

A second charge has also been laid in relation to a separate incident which allegedly occurred with a different motorcyclist on the same day.

Dash-cam footage of one of the incidents which was posted on the Canberra Drivers Facebook site on November 2 raised the ire of motorcycle groups and the police, with ACT Policing launching an investigation into the incident.

The footage (shared below) went viral and sparked a barrage of comments, primarily from incensed motorcyclists concerned that the rider could have been seriously injured. It has now been viewed more than 330,000 times.

A statement posted with the dash-cam footage on the Canberra Drivers Facebook site at the time said: “The driver did this to two bikes. Lots of laughing by car occupants afterwards. The passenger was looking into the side mirror for bikes passing.”

Commenting on the post on Facebook last November, the Motorcycle Council of NSW wrote: “Motorcycle riders are vulnerable road users — not target practice for incompetent, dangerous motorists behind the wheel of a lethal object.”

“This guy needs to be off our roads – that rider could have lost a leg,” commented someone else.

“That’s disgusting what that driver tried to do. Even at low speeds that motorcyclist could have been seriously injured,” wrote someone else.

On November 14 last year, ACT Policing put out a statement asking for public help in identifying the two motorbike riders involved in the traffic incidents. 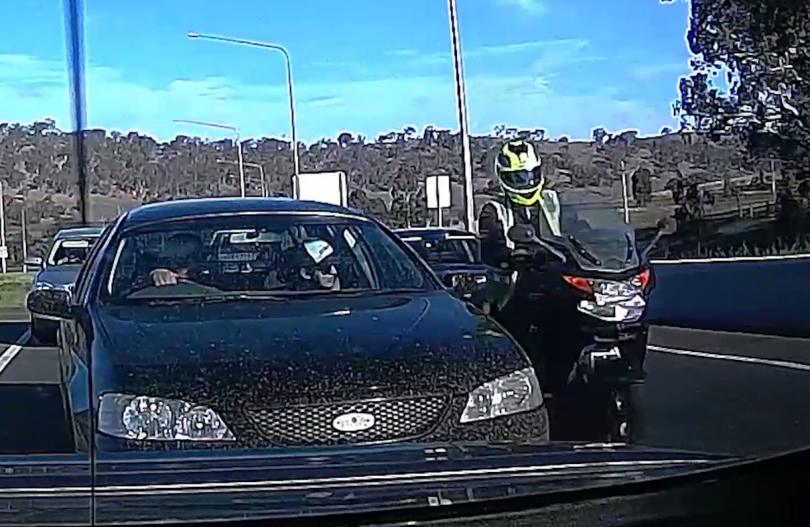 A photo supplied by ACT Policing last November of the traffic incident involving the other cyclist on October 30.

Police said that the two riders were separately travelling northbound on Majura Parkway, Majura, at about 4:30 pm “when a green Ford Falcon swerved, almost colliding with the riders”.

“At the time, the riders were lawfully lane filtering,” the statement said.

Motorcycle lane filtering is legal in the ACT with a trial beginning in February 2015 and ACT Roads Minister Shane Rattenbury announcing in early October 2018 that it was “now in place permanently throughout the ACT”.

Under the ACT’s lane filtering laws, motorcyclists are allowed to travel between stationary or slow moving vehicles, to reach the front of the traffic queue. The aim is to allow motorcyclists to move quickly and safely away from congested areas of traffic.

Shane Westmore - 2 hours ago
Absolutely. There’s people voting now who are completely misinformed about anything going on in this country & waste their... View
Nada Krstin - 5 hours ago
oops, meant to say, cannot have it one way! :)... View
Nada Krstin - 5 hours ago
No. And if you think they are mature enough to vote at 16 or 17, then they should be tried for any crimes as adults as well,... View
Opinion 94

Officer injured during hit and run in Holt