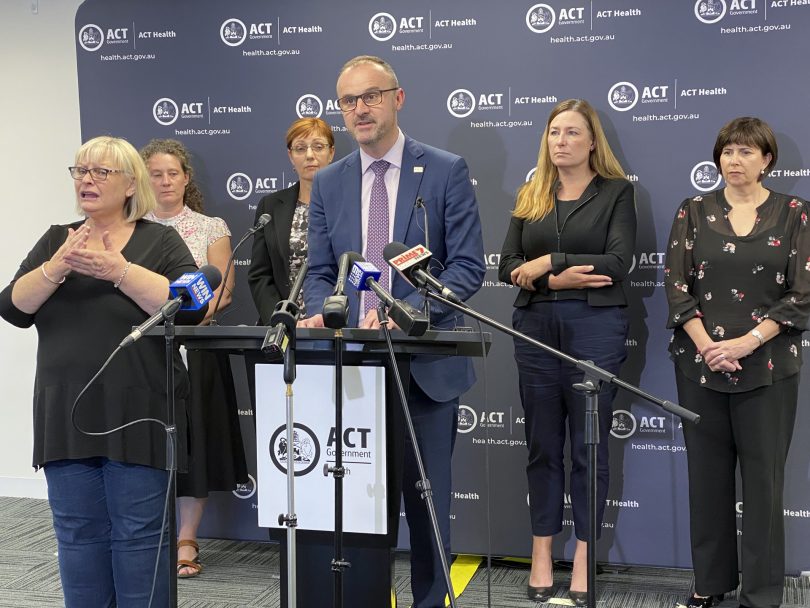 It’s been two years since the first case of COVID-19 was detected in Australia and ‘COVID pressers’ became a daily occurrence. Photo: File.

The ACT has recorded one more COVID-19-related death and another 904 new cases overnight as Australia passes the second anniversary of the pandemic.

A woman in her 80s has died overnight, and ACT Health has extended its condolences to her families and friends.

The additional deaths take the pandemic’s local death toll to 25.

There are now 67 people in hospital, including three in intensive care and one requiring ventilation.

Yesterday, there were 68 patients in the hospital, including three in ICU and one being ventilated.

The arrangements for ACT Government testing clinics remain the same as yesterday:

ACT Health said turnaround times for results are now between 24 and 48 hours.

The country has recorded around 2 million cases and over 3000 deaths.

Hospitalisations have increased slightly to 2943 from 2816 the previous day. There are 183 people in ICUs around the state.

NSW has also extended its current COVID-19 restrictions until the end of February so hospitality venues must follow the one person per two square metre rule, masks are mandatory, and singing and dancing are not permitted in hospitality venues.

Hospitalisations have increased slightly to 1057 from 998 the previous day.

I think I heard the radio news correct early this morning, around 10, where it was reported a young local League player was found to be covid and had been sent home to isolate

He said he was coping allright, doing weights and such.
He said he had no symptoms at all, and it was all a ‘bit strange”.

Next they’ll be barring private traffic on Northbourne & Commonwealth bridge altogether whilst they extend the costly & out dated slow tram. Traffic will come to a standstill on the Tuggeranong parkway as we lack sufficient arterial roads as it is. We threw out the Walter Burley Griffin plan for canberra years ago but maintained the Y structure of limited arterial roads.

All because of Covid?

Hey, I think you’re on the wrong thread here Linda, this one’s about Covid, you know that pandemic thing?

No Buzz819 and Astro2 I think you will find that the outdated slow tram and COVID 19 are related. Both can make you sick.