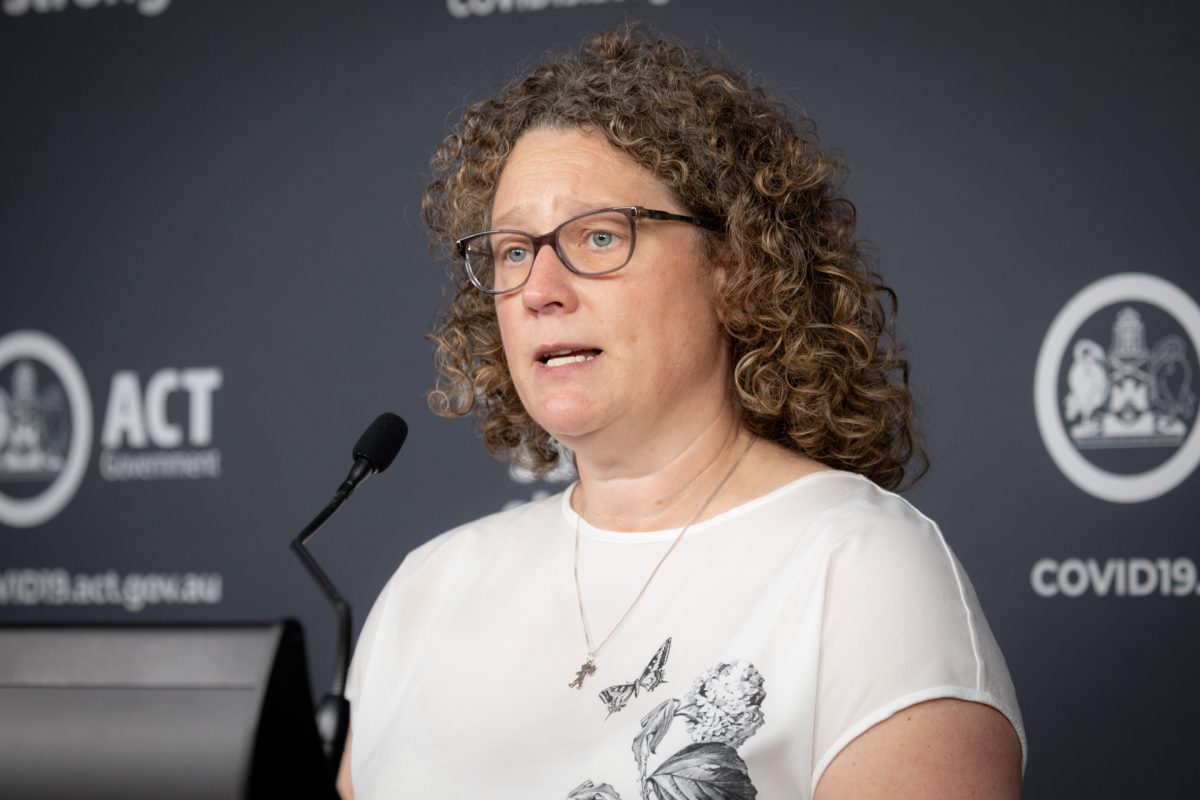 ACT Chief Health Officer Dr Kerryn Coleman said at a press conference in July she would consider pulling the plug on publishing daily case numbers if it was called for. Photo: Michelle Kroll.

The Territory has reported the death of a man in his 80s with COVID-19 overnight as ACT Health says it has no plans to stop publishing daily case updates at this time.

Exactly a year since the ACT was plunged into the Delta lockdown, it takes the total number of pandemic casualties in the ACT to 109.

There have been eight COVID-related deaths this week and 17 people this month have died with the virus so far.

A spokesperson for the ACT Government confirmed this morning there are no plans to stop daily reporting of COVID-19 case numbers in the short term.

“However, we do recognise that case number reporting will transition to a frequency similar to that of other diseases at some stage,” they said.

“The ACT Government is constantly reviewing the level and frequency of COVID-19 public reporting to ensure it is appropriate.”

For example, weekly surveillance reports are published on influenza during the flu season.

Case numbers in the ACT have continued to drop in recent weeks although Chief Minister Andrew Barr has warned of future COVID waves, including as early as this summer.

ACT Health Chief Officer Dr Kerryn Coleman said a month ago she thought there was a “good argument” for stopping the daily reporting of COVID-19 case numbers, but she noted it would need to be “called for” by the public.

“Our focus remains on the impact [COVID-19] has on the healthcare system,” she said.

All other states and territories are still publishing daily COVID-19 updates on the health department’s website, social media or both.

Active cases in the Territory have also declined once again. There are 2923 known cases in the ACT and there have been 197,561 cases reported locally since March 2020.

There are now 135 patients in hospital with COVID, four are in ICU and two require ventilation.

Yesterday, the Territory recorded the death of a woman in her 60s, 464 cases and there were 135 patients in hospital.

There are now 2194 people in hospital with the virus and 62 in ICUs around the state.

NSW Health says not all deaths occurred in the week they are reported as there is sometimes a delay between a death occurring and the department being notified.

Victoria has recorded 14 deaths overnight and 5180 cases of COVID-19.

There are now 550 people hospitalised with the virus and 30 patients are in the state’s intensive care units.

It appears the vaccines may lower peoples’ immune function, which may be why we’re seeing rises in other diseases like polio and shingles etc.