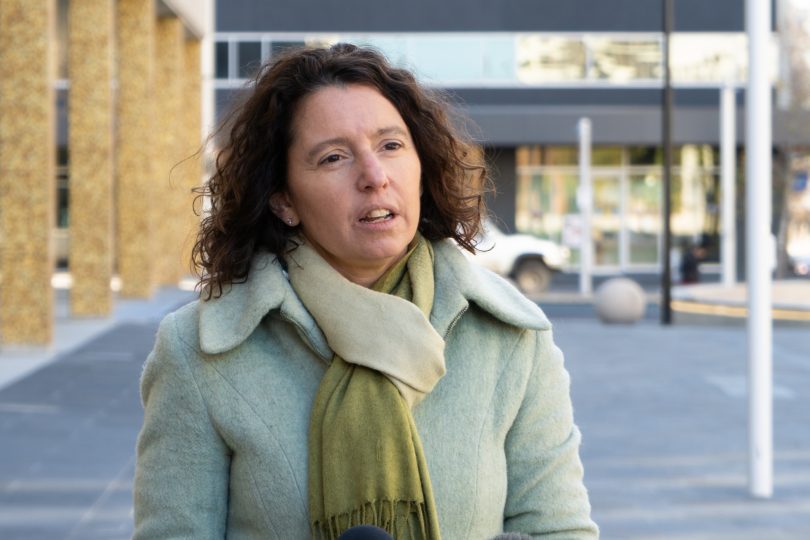 Minister for Sustainable Building and Construction Rebecca Vassarotti has expressed her disappointment with her NSW counterpart. Photo: Dominic Giannini.

The ACT will push ahead to make homes and buildings more accessible despite NSW ruling out changing accessibility standards for new constructions under the National Construction Code (NCC).

ACT Minister for Sustainable Building and Construction Rebecca Vassarotti said she was disappointed with the decision from her NSW counterpart after receiving majority support for the initiative at a Building Ministers Meeting in April.

NSW Minister for Better Regulation and Innovation Kevin Anderson said while he acknowledged the benefits of accessible housing, the new code would be expensive for new buildings to implement.

“It was agreed that each state and territory will be free to determine whether and how the new provisions will be applied in their jurisdiction,” Mr Anderson wrote in a letter to the CEO of NSW Council of the Aging, Megan Lawson.

“The proposal will require every single new home or apartment to be constructed to these higher, more expensive standards adding to the cost for all purchasers regardless of their accessibility needs.

“In this regard, the NSW Government does not support the inclusion of minimum accessibility standards in the NCC as currently proposed. The changes will have negative impacts on housing affordability and the construction sector, and will also come at a significant cost to the community.”

Mr Anderson said more flexible and balanced approaches, including non-regulatory options, had not been fully explored.

Ms Vassarotti appeared to reject this assertion, saying the decision had been a decade in the making and voluntary commitments had not seen the takeup of accessibility mechanisms during this time.

She said the proposed standards were “pretty minimal” and that costs would fall as the measures were adopted and their takeup became the industry standard.

“We know that this is not just an issue for a small group of people. We are all aging,” she told Region Media.

“At certain times of our lives, we may all face mobility issues, so these standards are looking at some very minimal first steps in terms of ensuring that all of our homes have some accessibility standards.

“With some jurisdictions going their own way, it does create some confusion for industry and makes it more difficult, which was one of the reasons we thought it was important to have a national code, particularly given that we were going to move forward in this issue.”

It is understood Victoria, Queensland and Tasmania will implement accessibility standards.

Another Building Ministers Meeting is scheduled for September where Ministers will finalise the code and its implementation mechanisms.

Ms Vassarotti, who is spearheading the push on behalf of the ACT, said while it was preferable to have a consistent approach to avoid confusion across borders, the Territory would move to implement the code and have it in operation in 2022.

“We will have discussions about the implementation but we do want to get on with the work,” she said.

Current codes mandate a certain number of apartments in a complex to be accessible. The percentage I would say would be equivalent to the general population that requires such accessibility.

it is so much easier and CHEAPER to design and build better in the first place.

Yet another cost for those aspiring to own their own home. I wonder if this too will add to a rise in rent in years to come? Every time the ACT government tries to fix anything to do with housing my rent seems to increase.

Scott Woolfenden - 8 hours ago
In this case,Novak stood by his beliefs that the rules are Bellshill and wasn't going to be billed. Perfect role model.... View
Carol Byrne - 9 hours ago
Sometimes they fall off. View
Vicki Mcateer - 10 hours ago
Robin Bontjer 4 million Ha ha View
Opinion 13