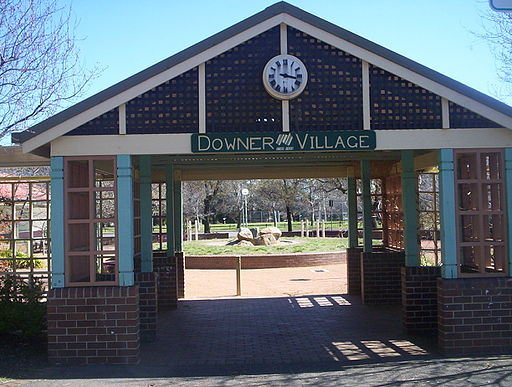 Many years ago the suburb of Downer had a thriving shopping centre and a bustling school next door. All this became a distant memory when the school closed and with the rise of the nearby Dickson shops, the local shops went into slow decline. Eventually the school building was demolished.

The situation could be about to change, though. Over recent years there has been a series of discussions between the ACT Government and residents about redeveloping the former school site. At times these discussions were open and transparent, while there were also occasions when a few cross words were uttered.

The locals value the open spaces around the centre and were very wary that the developers, in partnership with the Government, would be looking to consume some of the open spaces for building developments. Surely our Government would never allow such a thing!

It seems the community may have won the argument for some sensible development on this valuable site — and most of the open spaces will remain as parklands.

CHC Affordable Housing has launched a project for a major development on the former school site.

According to a press release announcing the project, the new development will include “a range of residential options from townhouses, apartments and independent living units as well as childcare facilities, and limited use commercial space. Preservation of the old school courtyard space is also being incorporated into the design based on community feedback.”

Most of the signs are positive. This could be indeed a sensible development. As it happens, the local shops are also being brought back to life as a separate commercial initiative.

So Downer may be about to take a giant step back to having an active commercial and community centre.

Fingers are crossed that the ACT Government keeps to its promises and does not allow detrimental compromises to creep in during the build.

But wait there’s more! There is a new website, www.CHCatDowner.com.au, to keep the communications open.

Things are looking up for Downer — it must spring!

Does anyone know how I might get in contact with the developer? I’d love to lease a space at the shops!

Does anyone know how I might get in contact with the developer? I’d love to lease a space at the shops!

Link them to the City with a tram loop coming back down through Lyneham/O’Connor/Turner/Acton and you can have a strong vibrant City Heart.

Unfortunately Canberra has to eat its countryside to feed the Beast that is Government Land Speculation.

Helen Topor - 15 minutes ago
Krystyna Topor a friend thought she was fainting (she was standing at the time). I thought that the shaking might be the begi... View
Anne Barnes - 22 minutes ago
While house shook in Shingle Hill Way Gundaroo View
Sally Asnicar - 36 minutes ago
My bum was plonked in my office chair as usual and I felt nothing. Zip. Nada. On Sydney's Upper North Shore. View
Opinion 13

Danielle Woodhouse - 17 minutes ago
Look at You Suzy! View
Robert Gannon - 1 hour ago
Foot in both camps , live in Wagga Wagga and Suzy is my niece 😎... View
Kelly Hitchings - 3 hours ago
Suzy Balogh there’s you xx View
News 103

Annie Wyer - 57 minutes ago
Jesse Mahoney I tried growing a whole lot in Belconnen around my complex and they faced east, they all got powdery mildew, th... View
Jesse Mahoney - 2 hours ago
Annie Wyer I'm a post graduate trained forester with many years experience on a technical level, I know a bit about trees. Cr... View
Opinion 190

@The_RiotACT @The_RiotACT
As part of Region Media, Riotact delivers news, views and information free to more than 700,000 unique readers every month. We've grown up with Canberra and now we are celebrating with a sleek new look https://t.co/kLK4zpxPwK (15 minutes ago)