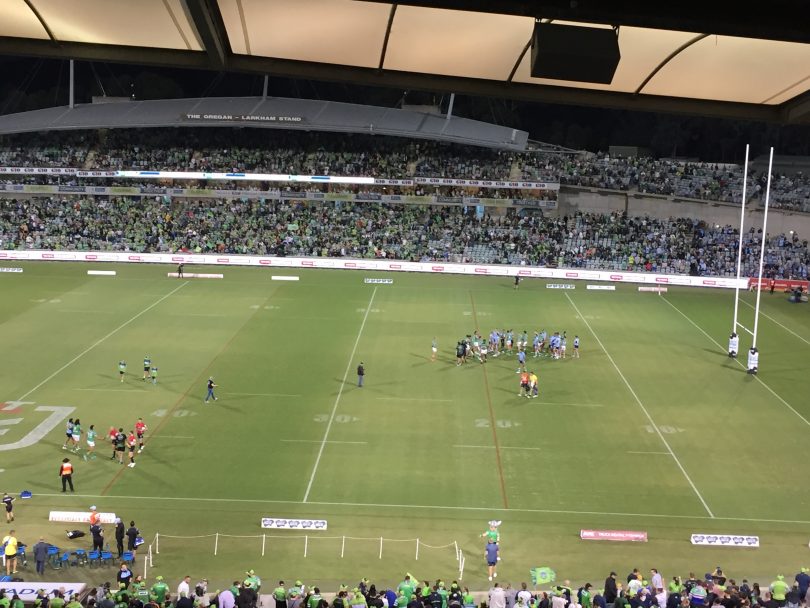 The Raiders’ first game of the season against the Sharks at Canberra Stadium. Photo: Jennifer Andrew.

As a Raiders fan, the opening game of the season could not have provided more drama and edge-of-the-seat anticipation.

Soon after kickoff, it became quickly apparent that the Raiders had adopted a new, more flamboyant approach in attack, with Elliot Whitehead providing an additional attacking option on either side of the ruck.

There was Ricky on the sideline jumping with joy as his players, down on personnel because of injury, came from behind to defeat the Sharks.

And you can be guaranteed that many of the 16,000-plus at Canberra Stadium will be back for more.

READ MORE Does anybody know the Super Rugby season has started?

The game was played with finals intensity and the drama of the Raiders game was replicated throughout the weekend in the opening round of the NRL.

Coverage of the game is everywhere. Raiders fans, for instance, would be well aware of practically every player in the rival team.

In contrast, while there was plenty to like about some of the football on the weekend in Super Rugby Pacific, including James Slipper’s pass to Tom Banks, some aspects left a lot to be desired as an entertaining product. 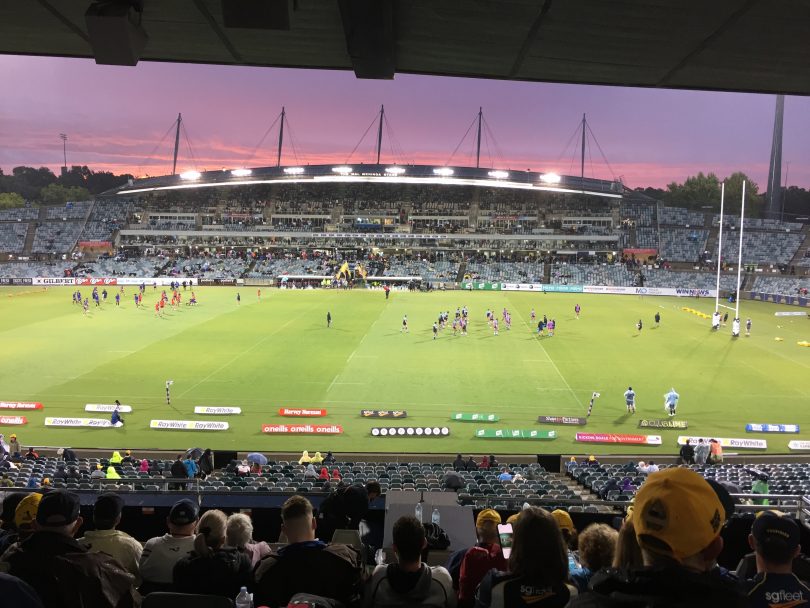 The Brumbies have an obvious intent to play attacking rugby, but the laws of the game at times are rugby’s own worst enemies.

A solution needs to be found for the continual resetting of scrums, which are a blight on rugby as far as entertainment is concerned.

There are also continual stoppages for minor injuries and players getting re-strapped.

Often, there is little flow. And I’m not the only one making this observation.

In writing this column, I canvassed the views of people who I knew were both Brumbies and Raiders fans.

While Brumbies fans are passionate about the team, there is a perception that something is lacking.

On the other hand, the NRL appears to be constantly looking at ways to make games quicker and more entertaining. The game rarely stops for an injury, unless it is for a head knock.

In Super Rugby, the sight of props going down on one knee seeking medical attention before scrums has become a blot on the game’s intensity.

NRL does also appear to have more autonomy in making rule changes. The result is an appealing spectacle.

But not everything is gloomy in the Super Rugby camp. Super Rugby has often presented exhilarating, attacking rugby, which is hard to match as a spectacle. It’s just that injury and player infringement stoppages, along with copious resetting of scrums, deflate the excitement and intensity of the game.

But the game can be thrilling. The Six Nations competition is an excellent advertisement for the rugby code. The France versus Ireland and the England versus Ireland games were outstanding.

Why can’t it be replicated in Super Rugby? Sure the lack of crowds does little to create a gladiatorial atmosphere, but they will return if teams and the code have an attacking mindset and somehow the rules of the game are followed and injury stoppages don’t dominate the flow of play.

The value of penalties should be reduced. With the referees handing out adhoc and pedantic penalties just watch a Melbourne Rebels game. All they do is kick penalties. No running rugby for them, it is too hard.

Yes agree, it’s not supprising when the rules encourage teams to play for penalties instead of tries. This is considered good rugby in the northern hemisphere ?

Being from over the ditch I have been bought up on Rugby. But my interest in watching it is waning because the pedantic rules, pedantic refereeing and inconsistencies of refereeing between games is ruining the spectacle. The referees have to much influence over the outcome. The games that have been lost by dubious penalties in the last minute of the game by over zealous refereeing seems to have increased.
I have been watching 6 nations rugby where the atmosphere has been great but they still had to contend with petty pedantic refereeing decisions (England Ireland match) that slowed down the play and could have changed the result. PS I also have Stan now so can watch in the comfort of my own home ?

Brumbies are playing some great footy. Not sure what all this negativity is about. Would be nice if refereeing was better and more consistent but I wouldn’t compare it to the snooze fest of rugby league 😴

Alex Troy Elsworth Adkins hard to accept that when actual play from one rugby game last week was less than 50 minutes ! I’d have another peek at which is the so called snooze fest…and I love all sports, so not bagging Brumbies. You play to the rules which are shite. Action needed as rugby in Oz, atm, is terminal without changes.

Haven’t been to a Brumbies game for years. The match was so slow I started looking around the stands at the spectators. There was more going on there. A South African player was sin binned for ten minutes and missed only 2.5 minutes of actual playing time according to Tim Gavel. No wonder interest is waning and I still think the refs are a bunch of show ponies as the game is all about them. Changes are needed urgently but doubt that will happen. Hopefully it will as I would like to return to support the Brumbies.

1.No more time consuming place kicks…..drop kicks only for goal. 2. Expansive individual play is limited by a back making a break then being isolated and having to release the ball which is either a turnover or penalty if they try and hang on to it..make it instant release only around the ruck and bring back rucking with the feet. 3. No more lifting in the lineout…deskills the game and takes away the wild card turnover. 4. No more picking the ball up off the back of the ruck or maul and running head down and back inclined towards the ground to make a metre and get the next phase…..back has to be level to encourage longer runs from the ruck or maul. 5. Get rid of the kicking out on the full from inside your own 25. 6. To avoid resets pack the Front Rows first then add the rest of the scrum with the ball to be fed in time with both scrums set. 7. No more ‘clearing out’…it’s just cheating plain and simple. 8. Reduce teams on the field from 15 to 13…at Super Rugby level all the players are fit, fast and strong..but they are still crammed into the same size field that they played on as amateurs 100 years ago…their superior speed these days negates open play to a fair extent. I played Union for 30 years, coached, reffed and even started a club but these days I can’t even watch Super Rugby on TV any more. Although I dont mind watching the odd game of local club rugby live.

It all starts with TV rights. So 100% on fox/Kayo wasn’t ideal but they have nearly 4 million subscribers with the AFL, NRL and a lot of international sport. A-League and Rugby both moved away from the “fox sports” network, which in itself is fine, but ended up with vastly inferior viewers, because the game are locked behind paywalls with far fewer viewers in terms of Stansport ($20 a month vs $25 a month for Kayo with NRL, AFL and Cricket….). the only FTA game is on a digital channel as well and not the major channels (which is also fine, if its advertised on the main channel). But the results are fast less people can view games, so less people will get excited about the games. I’ve followed the Brumbies from the beginning, but its become hard to care about them, RA makes ridiculous decisions all the time and its clear unless things are done the way sydney club rugby wants, they’ll do their best to not help super rugby.

Justin Watson Stan sports coverage of rugby is a lot better than Fox though. Fox sports coverage was awful, terrible commentators, no analysis or rugby shows, also rarely showed other comps like the Japanese league, premiership rugby, super W, club rugby etc. To be honest Fox was one of the main things wrong with rugby and it has started to rebuild, it will take time though. Aus is an abboration though every other country in the world rugby is going from strength to strength. One of the fastest growing sports, just need to look at crowds in Europe and North and south America.

I agree Tim. I am a Brumbies member and a Raiders member and I have occasionally been asked during Brumby games (usually due to another referee pedantic stoppage) how the Raiders game was the previous week. Rugby can be a great game to watch, for example the Fiji Drua v Queensland Reds game last week when the Fijians came from 19 points down to almost run down the defending champions with free flowing and unstructured rugby with the ref staying out of the way. The Brumbies holding on against the British Lions (2013) in the wet, and tough flowing games (usually NZ teams) are the exception rather than the rule.

Make penalty goals worth less in rugby and the players will focus on scoring tries – it’s not rocket science is it? 🤷‍♂️

Graham Fifield apparently it must be 🤦‍♂️

Penalties use to be 2 points.. same as a conversion… bring back the game from years gone..

Bryan Doherty tries used to be 4 points, they increased them to 5 to make them more attractive

Graham Fifield its not really the reason though. we aren’t getting games that are all penalty goals in the southern hemisphere these days.

I’d rather watch a dour struggle for points than a point-a-minute game any day. 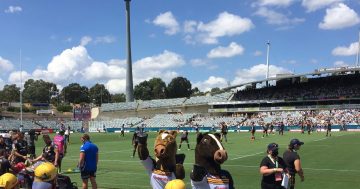