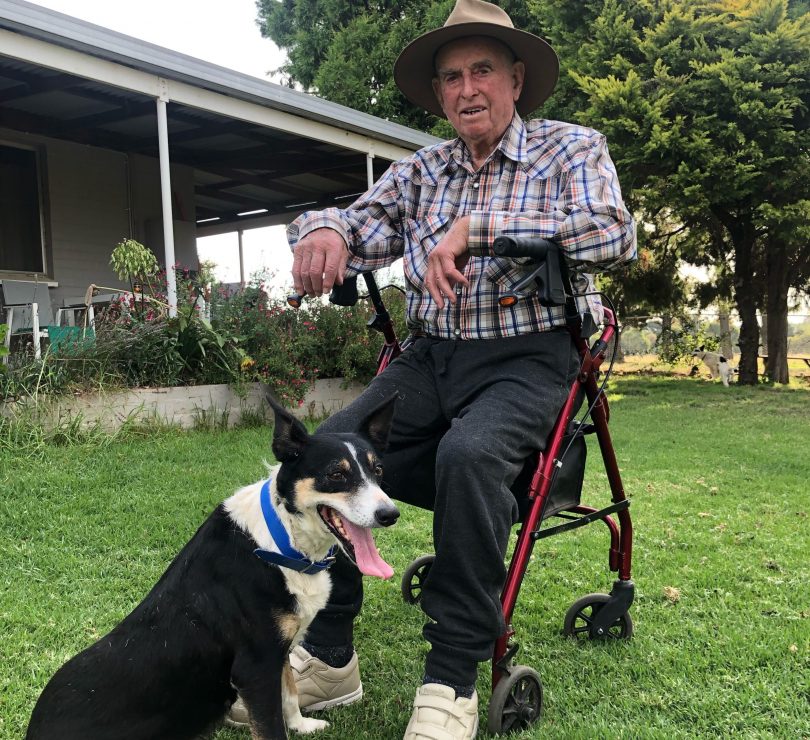 Laurie Slater is not one to let age get in the way of anything – even if it means competing in the National Sheepdog Trials against people less than half his age on his mobility scooter.

Laurie made the finals of last week’s trials which attracted the best sheepdog handlers and their dogs from all over Australia. At 88, he was the oldest competitor.

Not only has the Murrumbateman farmer been competing in the event for more than 30 years, but he has also spent much of that time sharing his skills with younger handlers and their dogs and took out the coveted title back in 2014.

It’s only possible, he reckons, because of Wondara ‘Jules’ Jewel who, in dog years, is roughly the same age as Laurie. He has trouble walking these days, afflicted by back and hip injuries, so being able to rely on his mobility scooter rather than his 88-year-old feet, also helps.

“The first round we did was very good,” Laurie said. “Then we got into a bit of trouble because she wouldn’t work for me properly.

“She was just too full. Before the trials, she’d had a belly-full of sheep guts.”

Laurie said he wasn’t planning on entering the trials this year. It was only after entries had closed that he contacted the president, Sarah Sydrych, saying, “I should be out there”. So his daughter Tracy gave up her spot for him.

Laurie said once they got going, man and dog worked well together, directing the sheep to where they needed to go. But then the mobility scooter decided it wasn’t going to co-operate.

“The bloody thing wouldn’t work properly. It stalled when I got it going so that didn’t help.”

At this year’s trials, which attracted a record 358 entries, dogs and handlers competed for the ultimate prize – the Duke of Gloucester sash. To win, the dogs had to herd three sheep through an obstacle course and into a pen. They started with 100 points but lost points for mistakes. This year, Laurie scored 84 – placing him in the finals. Although he didn’t take out the sash, he was clearly a crowd favourite.

The honour went to another experienced handler, John Perry, 82, and his dog Bredbo Ash, of Bredbo. 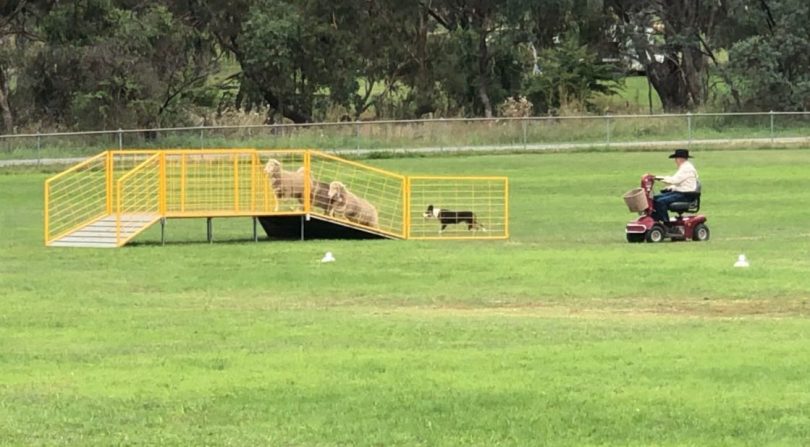 She also gave special mention to Laurie for his long contribution to the trials, both mentoring new entrants and their dogs, and generously sharing his expertise.

“His ability to work his dogs and know what his stock will do is a skill many wish to have,” Sarah said.

“On his mobility scooter, he managed to get into the top 20 on a score of 84. The sheep in the top 20 competition were extremely hard to manage and Laurie managed to coax them along until the bridge, then ran out of time. Who knows what might have happened if he’d had a few minutes on the clock?”

Laurie, who has always lived on the land, originally came from Tumut “where we lived right out in the bush”. After moving around for years, he finally settled on a 60-acre property at Murrumbateman.

He usually has four to five dogs on the go, with training starting at about six months, but it could take years for them to excel at sheep work. And it’s always been border collies, not kelpies. “Border collies are just smarter,” he said. “Sheep work with them better. I always work them quietly. It doesn’t do to upset stock.”

Will Laurie be a starter for next year’s trials?