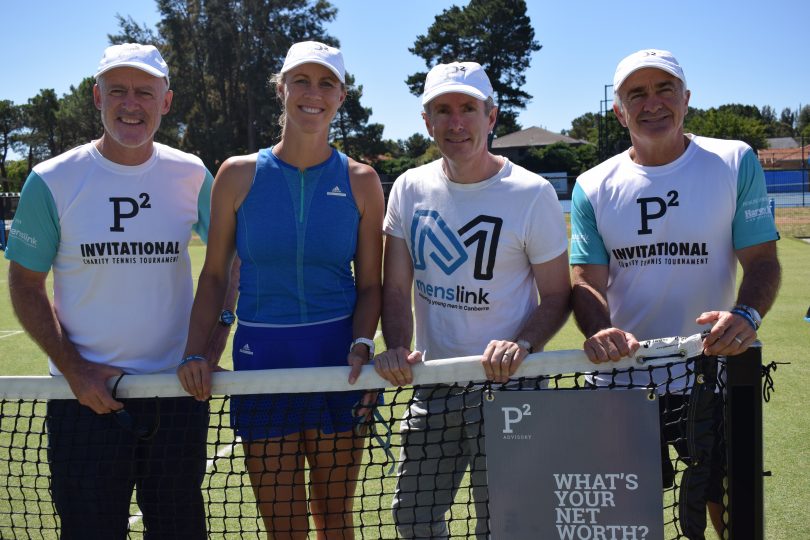 Former world No.8 and current Australian Fed Cup Captain, Alicia Molik, with Australian tennis legends Wally Masur and John Fitzgerald came to Canberra to have a hit at the Canberra Tennis Centre all in the name of charity on Thursday afternoon (1 March).

Molik returned to the court where her Australian Fed Cup team beat Ukraine a few weeks ago to support Menslink at the 2018 P2 Invitational, a local tennis fundraiser held at the tennis centre in Lyneham.

The charity tennis event was held to raise support for the local charity which encourages young men to speak up and get help by providing intensive short-term counselling and long-term mentoring support.

“It is fantastic that a local charity can be supported and funds pumped into the local network here in Canberra. I am happy the grass court is still here so we get to enjoy the spoils of that today. We had a wonderful time here in Canberra as part of the Fed Cup team,” Molik said.

The charity tennis fundraiser, organised by Mark Peatey, has the sole aim to attract corporate teams to raise funds for local charities. Now in its eighth year, the event has raised over $800,000 for local Canberra charities with the goal to bring its total funds raised to over $1 million in 2018. 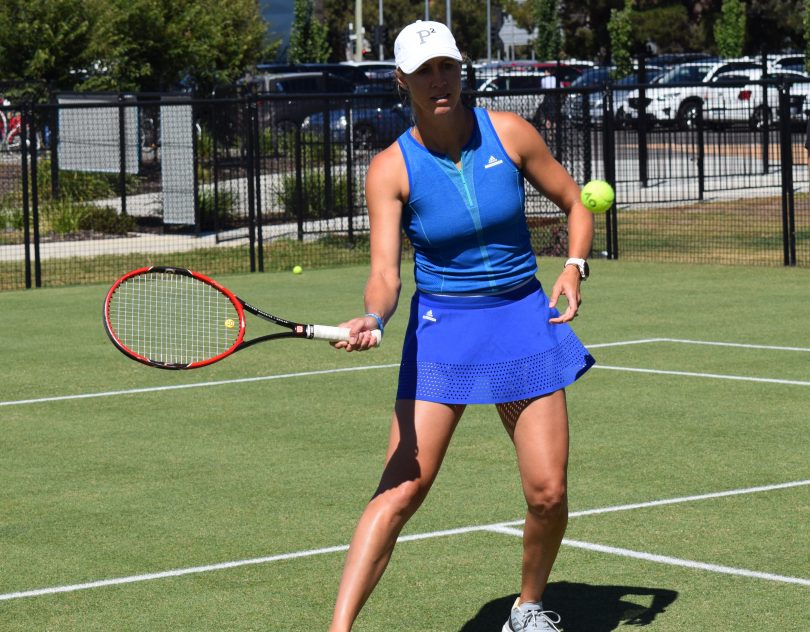 Molik hits a forehand volley during the invitational at the Canberra Tennis Centre – Photo: Supplied by Tennis ACT

Former Davis Cup captain, Wally Masur, said he was glad to be back in Canberra and to support Menslink.

“I am a Canberra boy and I played all my junior tennis here at Lyneham and I have been coming here since I was eight years of age. Obviously with Mark Peatey through P2, what he has done over the last eight years raising money for Canberra charities is great. I have been involved in the last three or four and I am happy to be back.”

“The idea that young men have someone to talk to and to realise they are not alone and the ability to connect with mentors, it is just massive. You think about that moment in time and how that helps a kid, and how that resonates throughout the rest of his life and the contribution he makes to the community going forward. I think its huge.”

Menslink CEO Martin Fisk said that it was great that the money raised through the invitational tennis tournament was staying in Canberra to look after young men and their families in Canberra region.

“This is the first time that Menslink has been affiliated with the P2 Invitational, and we are really really pleased that Mark Peatey and his crew decided to really back us and we are gonna make a huge difference to the lives of many Canberran families.”

Click here to see how you can support Menslink.

Chris Prentice - 24 minutes ago
Matthew Soall But it is a business. View
James Vetos - 53 minutes ago
A committed centre of learning excellence... Nope, a one trick business struggling under a poor business model. Should be ash... View
Liam O'Toole - 3 hours ago
Emphasis on international students. ANU is discovering the results of putting all your eggs in one basket. View
News 22