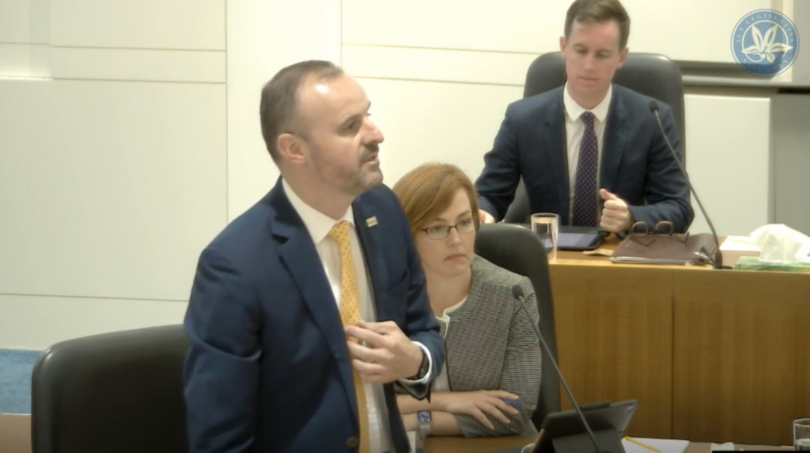 Chief Minister Andrew Barr has called for all media organisations to adopt the ABC’s editorial policy and for an end to newspaper editorials telling people how to vote.

In a statement to the Legislative Assembly today before a censure motion moved by the Opposition in relation to the Chief Minister’s incendiary remarks about journalists and the media last week, Mr Barr said the media were not above criticism but that criticism should be constructive, and he acknowledged that he had not done that and apologised for his choice of words.

But he said the era of newspapers telling their readers how to vote should end regardless of what side of politics they were endorsing.

He also said that the public stance of the ABC’s non-political editorial policy should be emulated across all media.

During the debate that followed Mr Barr said his remarks were “clearly a political mistake in addition to being a personal mistake”.

But he did not believe that he had said anything that contravened fundamental democratic principles and “I am pleased to be able to reiterate today support for those principles.”

“I have and will continue to reflect upon the various factors that contribute to the view I have formed and some of the things that I have said,” he said.

The Greens expressed their concern at the Chief Minister’s comments, particularly concerning older Canberrans, and welcomed his apologies but leader Shane Rattenbury said Mr Barr had been right to express the necessity of communicating through a range of different channels to different audiences.

He moved an amendment that watered down the censure motion and this was adopted on party lines.

“We further affirm that Assembly collectively affirm the freedom of the press and the important role that journalists in all forms play in a democracy. This Assembly affirms its commitment to an inclusive Canberra that does take account of all of the perspectives that are out there.”

The Opposition issued a statement afterwards attacking the Greens’ double standards in supporting the Chief Minister.

“The Chief Minister’s born-to-rule mentality has driven him to lash out at anyone who dares to criticise or even scrutinise the Government,” Liberals leader Alistair Coe said.

“Today’s censure motion was to bring Canberra’s elected representatives together in solidarity to say that there is no place in our community, or in our parliament, for this sort of behaviour.

“The Canberra community will rightfully be disappointed to learn just how low the Greens and the Labor Party has set the bar for the leader of the Government.”

Mr Barr said the Greens were not an independent voice and there was no cross-bench.

“The Chief Minister has been critical of older Canberrans because they often use their retirement to engage in political life, drawing on their knowledge and experience, to draw critical conclusions about the conduct of government policy,” Mr Coe said.

“The Chief Minister’s expression of hatred is simple: he hates it when anyone speaks out against the failures of the Labor-Greens Government he leads. He hates it when people exercise their right to free speech and a free press. And he has made clear that he is prepared to use the public purse to greatly expand the propaganda tools of his government to drown out the voices of dissent.”

Emjay Barker - 12 minutes ago
Daniel Duncan that’s a great idea 🤣 View
Daniel Duncan - 45 minutes ago
Stuff the test let them back with out any restrictions. View
Tracy Hancock - 9 hours ago
Nurse and midwife here. Have looked after patients who were Covid positive and didn’t know it when they saw me. I haven’t... View
News 33

Tommy has been a mainstay around Woolworths Dickson for years, so when he mysteriously disappeared last week, it was no...
News 42

It’s all COVID but where is the rest of government?

@the_riotact @The_RiotACT
Peter Walker's overcome some serious battles over the past 20 years, but he says he's ready to take on the #challenge as the new mayor of #Goulburn https://t.co/OCLVo6yk2h (11 minutes ago)