An ending of sorts at All Bar Nun 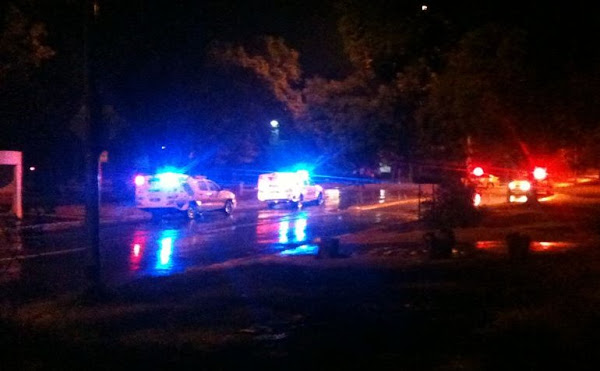 Last night was last drinks at All Bar Nun in O’Connor.

As the home to our rugby podcast I’ve spent a lot of time there.

In many ways it was the first decent bar in the Inner North.

My favourite night would have to have been on the Brumbies mad monday when they took ove the courtyard room created a bowling alley by moving tables together in a long strip, with bacardi breezer bottles as pins, and a guy in a pink pig suit as a bowling ball. (at the end of which hilarity they asked for a broom and cleaned up after themselves I should note.

I stopped in for a couple of pints yesterday afternoon and signed the condolence book. As you’d expect there was a strange mood.

Perhaps fittingly we hear it culminated in a big fight in the small hours of the morning. A reader has sent in the above picture of the police presence. ACT Policing had this to say on the matter:

ACT Policing responded to a disturbance at All Bar Nun in the early hours of this morning involving five men.

No formal complaint was received by police from the victim.

They will be opening soon two doors down where the Marinetti italian restaurant has been doing not much for years, which will be interesting if the building owner does open up a bar in the old site. 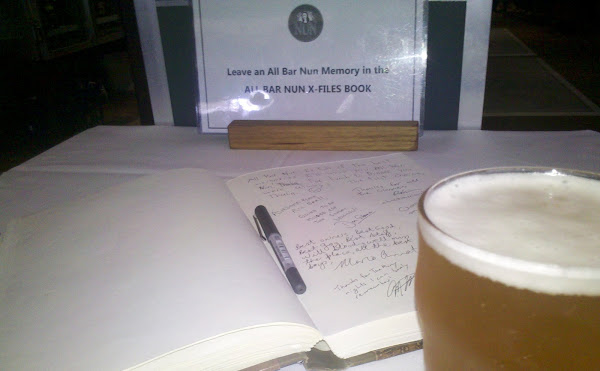 That was it! 🙂 Wasn’t around too long though….

Always felt a bit safer there than at the crown 🙂

That was it! 🙂 Wasn’t around too long though….

There’s been some classic places there in the past! Remember the Rose and Crown, or Matilda’s, or the recent Pendos pool hall? None were exactly yuppie or metro establishments though! Hahaha!
There was even a bar once where Kingsleys/Crust are now. Can’t remember the name of it…

I was just thinking of Matildas. We used to go there for family feeds, and later on me and schoolfriends would go there, loved those alcoholic coffees in the big mugs!

There’s been some classic places there in the past! Remember the Rose and Crown, or Matilda’s, or the recent Pendos pool hall? None were exactly yuppie or metro establishments though! Hahaha!
There was even a bar once where Kingsleys/Crust are now. Can’t remember the name of it…

Sorry all, please forgive this mostly-off-topic aside

…I waited for many years to try Marinetti’s after hearing poor reviews. After relenting last year some time, I was only ever going to go once…

Anyone who’s been to Marinetti’s in the last few years and been disappointed and bewildered at why some have raved about it – I suggest you go to d’browes in Narrabundah. The chef, Damian ran Marinetti’s back when people raved about it.

Token back-on-topic: Yes, very sad about The Nun. I wish I could have gone there more often (but it’s not really handy for me here in Weston Creek).

marinetti’s was an old sentimental favourite of mine for years (i went there first in 2000 or so) then it suddenly went downhill – the reason being the head chef pulled up stumps to establish his own restaurant in inner south. IMHO of course.

I agree wholeheartedly with Holden Caulfield on the food at ABN and Marinetti’s and ABN. If you use quality ingredients and don’t muck around with it too much you will most likely produce a quality meal. Marinetti’s is not cheap but their meals are very ordinary at the moment. sames was the case for All Bar. I also agree that the food at Edgars has improved over the last year and is a good place for a beer and a bite.

So, were four men fighting one victim, or what? Maybe the Victim was embarassed or unconcious and so not able to lodge a complaint. I want to know about the fight.

A shame, I guess.

But a very interesting tidbit there JB. I waited for many years to try Marinetti’s after hearing poor reviews. After relenting last year some time, I was only ever going to go once. Nondescript food and poor service is rarely a winning combination.

I enjoyed a very nice lunch at Edgar’s Inn on the weekend and hopefully a smaller venue will allow the ABN crew to focus on quality. IME their food was well below the standard of Edgar’s.

Brice Smith - 1 hour ago
Malcolm Snow is a conservative. Got nothing to do with Barr. View
Brice Smith - 1 hour ago
Good old conservative Malcolm Snow, strikes again. That’s the type of dumbassery we get from the Libs... View
Cary Elliot Johnson - 4 hours ago
Get out. And i was feeling positive about asking Mr Gentleman about getting a Batcave Interchange developed in Lanyon. Booooo... View
ACT Election 13

Darron Marks - 3 hours ago
When the construction moves so will the priorities for Government to build new infastructure. And it would have been the same... View
ACT Election 11

Jason Preston - 5 hours ago
Buying your vote with your kids View
Jesse Mahoney - 8 hours ago
Y'all are arguing with someone who likes Pauline Hanson. I wouldn't waste your energy View
John Hartley - 9 hours ago
Labour drunk on money till there is none left then tax go up there a joke and have and will be for a long time View
Lifestyle 8

Toni Higgins - 5 hours ago
Shame facebook cant b used for good only instead people like to b nasty and put people down all the time.wonder if they would... View
News 7

Jess Peil - 6 hours ago
This is so exciting! View
Roland De Saxe - 9 hours ago
Great idea for Eden area View
Talla Mc Bogan - 14 hours ago
happened in the otways ,, mountain bikes took the moto tracks ,, they only use a small area though ,, so plenty of moto track... View
Property 3

Scott Humphries - 11 hours ago
"Braddon of the south" . So the light industry and commercial businesses will eventually be pushed out by apartments, just as... View
Marc Edwards - 13 hours ago
And 5 minutes later the residents will all start complaining of the noise etc. Some areas should remain commercial, not every... View
Jp Romano - 16 hours ago
A great area - great building and a great developer. View
Opinion 31

Charny Barney - 17 hours ago
Are there any more policy promises they are going to back flip on? Alistair's indecision and poor decision making is not a go... View
Sue Ellen - 22 hours ago
Elroy Jones Yes. It's one of the prettiest areas of the lake. It used to be nicer before they bulldozed all the trees on the... View
ACT Election 20

@The_RiotACT @The_RiotACT
Are you ready to try a new sport? Kimberly Lennard tells what it was like to try softball for the first time https://t.co/xElifKJU5D (5 hours ago)

@The_RiotACT @The_RiotACT
@CanberraAirport has pulled back from the brink and will return to a seven-day operation after the recent border reopenings brought back flights https://t.co/t2PIRlRLqt (8 hours ago)