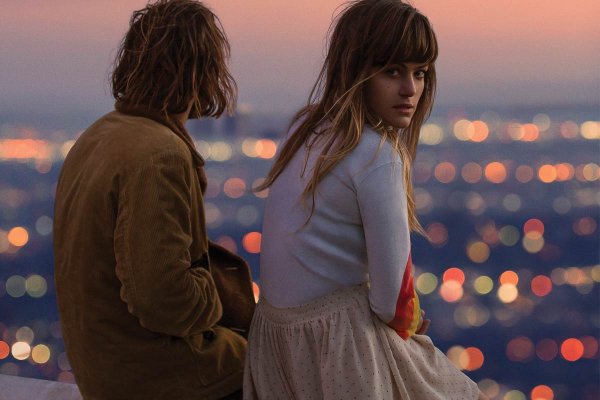 I’ve always been so charmed by Angus and Julia Stone – the balance between those two polar opposite voices meeting in the middle to create the music that they do has always incited a chill down my spine. The haunting richness in Julia’s unique soprano is so raw and unrestricted – there’s nothing like it. Safe to say I was pretty excited about seeing them live. Turns out what I’d imagined and what I got were pretty far apart.

When I think Angus and Julia Stone, I think two guitars, two stools and two mic stands. Upon entering the hall however, I was instead greeted by two impressive set ups on either side of the stage, drums, keyboards, swirly things that I’ve never seen before, three guitars and a bass – the works.

The band set up and Julia walked out on stage looking her usual adorable self in a little black baby doll dress and a pair of boots followed closely by Angus who, by my observation, seemed well and truly high enough to fly away. Everything about the brother-sister duo is wonderfully awkward.

The show opened with a song called ‘The Heartbreak’ from their latest self-titled album, and from there the atmosphere was set. The entire evening was a whir of little jokes, stories about their songs (Stealing lights from k-mart for their jam room at home) and about twenty different women yelling ‘WE LOVE YOU ANGUS’ (while someone awkwardly added ‘And you Julia…’). The appreciation for Angus, while funny, was pretty lost on me. I’ll admit after listening to every album at least a thousand times, I definitely leaned more towards Angus than Julia in the battle of favourites but having witnessed her live on stage in all her tiny glory, I have to admit Julia absolutely stole the show for me. She was cute, funny and talkative, and she swayed around the stage like she was lost in the sound, hearing all the songs for the first time. Her voice rang through the crowd with such perfect control that I was left breathless – Especially when they performed ‘My Word for it’ and she really pushed herself vocally – simply amazing. While Angus sang his parts giggled a few times, he was mostly quiet.

I think the greatest thing about the Angus and Julia crowd is that they appreciate every song on a pretty even level. There is love for all, from the winner of hottest 100 2010 song ‘Big Jet Plane’ to ‘Devils Tears’ and ‘Yellow Brick Road’. No bigger fuss was made over one song than the other, and there was none of those unnecessarily long intros on the more popular songs, no annoying build up- Just humble music played the way it was meant to be played.

While ‘Mango Tree’, ‘Paper Aeroplane’, ‘And the Boys’ and ‘Just a Boy’ were mildly missed, it didn’t necessarily disappoint – instead the group cover of ‘Bloodbuzz Ohio’, wherein all the members of the band stood arm in arm and sang together, and the interesting cover of ‘You’re the one That I Want’ filled the gap and made the entire performance from beginning to end a stunning display of the duo’s diversity. At the end of the show I was ready to take up my seat and watch it all over again.

My personal favourite tracks from the new Angus and Julia Stone albums are ‘Heart Beats Slow’, ‘My Word for it’ and ‘Please You’ and if you feel so inclined (and which I highly recommend) you can buy the album online here.

Sylvia Doherty - 1 minute ago
Amy MacMillen this is the talk that we went to that I was telling you about. View
Anne Brechin - 7 hours ago
I’m not convinced society as a whole wants to jail 11 year olds. View
Coralee Rauber - 7 hours ago
At age 11 the kids know better. The age should stay at 10 to be sentenced View
Community 92

Peking Duk is back on Canberra’s menu this weekend