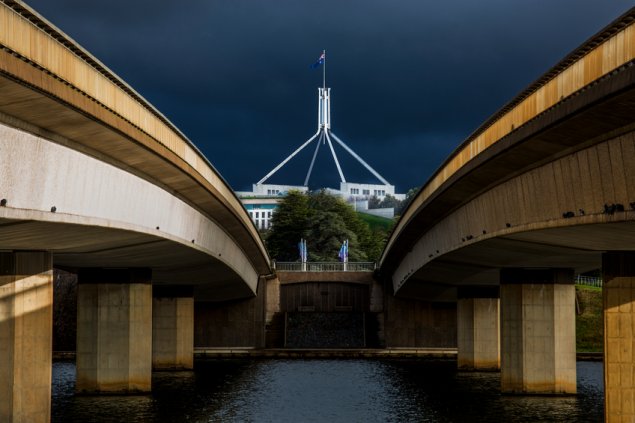 It seems the Commonwealth Bridge on Parkes Way is becoming a magnet for stuck trucks.

In October last year a truck hauling an excavator blocked the Parkes Way tunnel for two days, leading to a $1.2 million insurance bill.

On Thursday another one carrying a large prefabricated concrete wall slab became wedged under the bridge.

The truck shut down one westbound lane, police said. Debris was scattered over the road after the vehicle hit the underside of the bridge at about 2.30pm.

However, the scene was quickly recovered and by 3pm the truck had been extracted from the bridge and was off the road.

WorkSafe ACT spokesman said inspectors had been called to the site but had determined that the matter needed no further investigation.

how is train carrying prefab concrete slab going to get stuck under Commonwealth bridge ?

Doesn’t seem to be in the risk plan. This is almost the most egregious omission after the whole meteor hitting the earth thing and flying cars developing artificial intelligence and banding together to form dive-bombing mosquito squads on innocent tram riders.

Why have you not bought those up?

What are you trying to hide?

I’m just waiting for this to appear as a plot line in Secret City now!

Judith White - 2 hours ago
While speaking about racism to a friend whose skin is very, very dark, she said '" Ï don't see colour ." Does that make my f... View
Aaron Still - 13 hours ago
Rob Thomas clever way of putting it 👍 View
Business 38

Bronwyn Tolley - 9 hours ago
Karin Hagel Prince Phillip at Buckingham Palace, July 20th 1969. The day man landed on the moon ! View
Maya123 - 10 hours ago
LOL, I have about nine pairs of shoes I wear away from the house. Plus two handbags, which I haven't used for about two years... View
Tig Beswick - 12 hours ago
Robyn Lynette Pierce - when I was a little girl, I went to the NSW Governor General’s house because my dad had been invited... View
Breaking 1

@The_RiotACT @The_RiotACT
Mothers and children are being forced to sleep in their car as access to emergency housing in Canberra reaches a crisis point, says the @WomensLegalACT https://t.co/xdyOQdAxb5 (38 minutes ago)