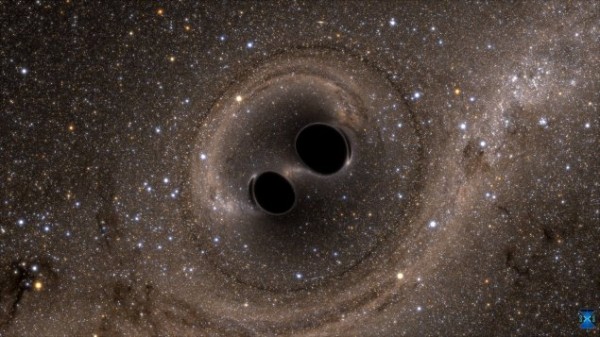 An ANU scientist has led the Australian team within a global scientific collaboration that has proven the existence of gravitational waves, 100 years after their existence was predicted by Albert Einstein’s General Theory of Relativity.

The confirmed observation of a gravitational wave, ripples in space caused by the collision of two black holes, is a major discovery and opens up new fields in physics and astrophysics. It will give scientists a new way to study the universe, black holes, dark matter and gravity.

More than 1,000 scientists around the world have been involved in the research, including the collaboration of Australian universities through the Australian Consortium for Interferometric Gravitational Astronomy, led by Professor David McClelland from The Australian National University.

“For the first time, we’ve been able to observe a gravitational wave, created 1.3 billion years ago by the collision of two massive black holes,” Professor McClelland said.

“This observation confirms that gravitational waves do exist. It is a moment that will be remembered for a thousand years.”

“It has passed with flying colours its first test in the strong gravity regime which is a major triumph.”

“We now have at our disposal a tool to probe much further back into the Universe than is possible with light, to its earliest epoch.”

The gravitational waves were detected by the twin detectors of the Laser Interferometer Gravitational-wave Observatory (LIGO) in the United States, in Louisiana and in Washington state.

The gravitational waves were produced during the final fraction of a second of the merger of two black holes to produce a single, more massive spinning black hole. The collision is the most violent event ever recorded in the universe.

The ANU, UWA and University of Adelaide helped build crucial components of the LIGO detectors used to find the gravitational waves. Australian institutions were also heavily involved in analysing the data.

Already, spinoffs from the technology are being used and developed for commercial applications, such as the search for oil and gas and to measure groundwater from space.

The Australian government, through the Australian Research Council, has made significant contributions to the project.

The success of LIGO promised a new epoch of discovery, said Professor Andrew Melatos, from The University of Melbourne.

“Humanity is at the start of something profound. Gravitational waves let us peer right into the heart of some of the most extreme environments in the Universe, like black holes and neutron stars, to do fundamental physics experiments under conditions that can never be copied in a lab on Earth,” Professor Melatos said.

ANU designed, constructed, installed and commissioned a system that stabilises the experiments. The system also pulls the system back into line if it is disturbed, for example by a magnitude 7 earthquake anywhere in the world.

The university team also built, installed and commissioned 30 small optics steering mirrors for routing the signal beam around the interferometer and into the detectors.

CSIRO was contracted by LIGO to provide coatings for some mirrors, precisely controlled layers of optical materials and a top layer of gold, designed for thermal shielding. They are among the most uniform and highly precise ever made.

Eileen Woodward - 4 minutes ago
To everyone who says they are not native and should be controlled. I hope you are a regular sponsor or donate to Canberra Str... View
Simon Troman - 21 minutes ago
Noelle Waugh There was a study like this in Hobart where one owner swore their cat never roamed. First night with the tracker... View
Vanessa Parton - 52 minutes ago
There are many facts of the operation of Canberra Street Cat Alliance that have sadly been omitted from this article which ce... View
Lifestyle 25

Omer Seker - 19 minutes ago
The roll out of these scooters in Canberra are a waste of money. There are people out here not parking these scooters appropr... View
News 4

Lynn Stape - 3 hours ago
Hung Ton Belconnen Mall is down right scary with all the people who cram into it without any thought to current events... but... View
News 1

Lin Van Oevelen - 5 hours ago
Andrea Kerr It's a shame to hear it had a negative effect on productivity in your area, Andrea. That would've been difficult... View
Julie Maynard - 13 hours ago
News my dogs would be very happy with! 😂 View
Andrea Kerr - 14 hours ago
Lin Van Oevelen my personal experience is people are no where near as effective when working from home, output is significant... View
Lifestyle 6

Slobodan Paunovic - 15 hours ago
Michael Cameron POLETITIONS AND experiments by scientist is killing people and it will destroy the world soon.. View
Brooke Jane Good-oloughlin - 19 hours ago
Jean Davies super healthy but my standards are to high to be a poster girl. Thanks though! View
News 12

Elizabeth Mulholland Porritt - 15 hours ago
The pilot should be well aware of the static risk of landing his aircraft! Known issue, not something isolated to this aircra... View
Opinion 7

Patricia Bourke - 17 hours ago
It’s disgusting. We have the money that just on things like Corman to fly around the world I know that’s federal but the... View
News 4

Ruby Stead - 17 hours ago
Wow this is great! View
Lifestyle 1

Lauren Ogden - 18 hours ago
Lauren Ogden We saw this one in the hills behind Corin Forest today! View
show more show less
*Results are based on activity within last 7 days

Canberra is in for a big weekend, with TEDxCanberra presenting a fascinating talk on Sunday, the Trading Card Fair and...

Christmas is around the corner, which means Christmas parties (albeit COVID-19-era versions) are in full swing. For a vegetarian like...
Community 99

A mega colony of 47 cats roam an industrial area of Fyshwick they call home. The street cats are in...
Opinion 43

As summer approaches, ACT police are warning us that more Canberrans than ever have been caught speeding. They say, rightly,...
News 26

The ACT Government will become the first in Australia to be able to declare public events single-use plastic-free under a...
Lifestyle 25

If you are looking for a restaurant to celebrate that special occasion, then you have come to the right place!...
News 34

The revelations about alleged war crimes in Afghanistan by members of Australia's Special Air Service regiment is a big wake-up...
Business 15

One year ago, Glenys Beauchamp was Secretary of the Department of Health, preparing for her upcoming retirement after nearly 40...

@The_RiotACT @The_RiotACT
New Greens MLA Jo Clay has called on the government to withdraw financial support from the horse racing industry in the ACT https://t.co/xi5Au3JEhS (1 hour ago)

@The_RiotACT @The_RiotACT
North Ainslie Primary School is setting a benchmark for school playgrounds after raising more than $50,000 and winning a sustainability award https://t.co/fhS21o2fAf (2 hours ago)

@The_RiotACT @The_RiotACT
This elegant 1930s home in a premium position in Ainslie is fully renovated but has retained the beautiful features of the era in which it was built https://t.co/4MCzPbL3wh (3 hours ago)