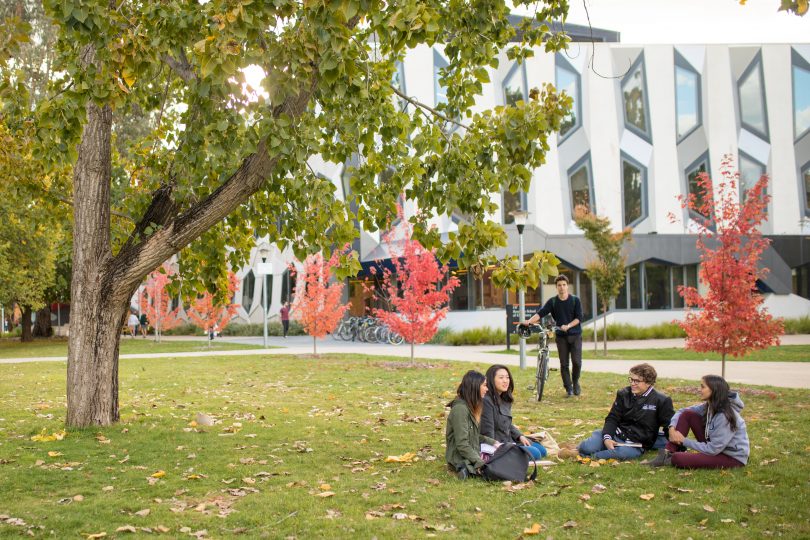 In 2017, 35.8 per cent of ANU students were from overseas, with more than half of these from China, according to the CIS report. Photo: ANU.

The Australian National University has dismissed a report claiming Australia’s universities have exposed themselves to undue financial risk by ramping up the numbers of international students, particularly those from China.

The Centre for Independent Studies report, The China Student Boom and the Risks It Poses to Australian Universities, says universities are taking a multi-billion dollar gamble with taxpayer money to pursue a high-risk, high-reward international growth strategy dominated by booming Chinese enrolments.

It argues that while enrolments have levelled off, the bets of universities like the ANU may still backfire, with taxpayers picking up the tab if a number of political and economic factors come into play. It urges them to start mitigating this risk.

It says universities have become dependent on the revenue that overseas student fees generate. The report says that the ANU in 2017 relied on 13 per cent of its revenue from Chinese student course fees alone.

An ANU spokesperson said the university was a research-intensive university and continued to secure half of its revenue from high-quality research activities and outputs.

“Our reputation as one of the great universities of the world is built in part on our international character and ANU has always attracted the best students from around the world. We have always had some of the highest English language and academic standards when it comes to admissions,” the spokesperson said.

“By Australian standards, we have a small student population and a high proportion of students who live on campus. We plan to keep that unique character.

“ANU recently changed our admissions process to ensure we remain a university where students are not lost in a crowd, but are part of a learning community of outstanding students from diverse backgrounds, drawn from across Australia, our region and the world.”

The ANU has said it wants to diversify its sources of international students and that it had reached its student growth limit.

The ANU spokesperson pointed to the Universities Australia response to the report which highlighted the regulator’s recent finding that a vast majority of Australia’s universities were in a low-risk financial position.

The CIS report says 20 per cent of enrolments at the University of Canberra are from overseas.

The ACT has more than doubled the export value of international education services in Canberra since 2013, and according to the Government is now worth over $1 billion a year to the ACT economy. Australian Bureau of Statistics data released in June show the ACT’s international education exports skyrocketed in 2018, up 15 per cent on 2017 figures to be valued at $1.009 billion.

The ACT Government said that in December 2018 – the last full academic year figures – there were 11,147 international tertiary student enrolments from China studying in the ACT, including higher education, vocational education, English language intensive courses for overseas students and non-award students (Austrade/Department of Education student visa data). International students from China make up approximately 17 per cent of the ACT’s tertiary student cohort (based on a total of 62,993 tertiary student enrolments – Deloitte Access Economics, November 2018).

“We have a strong university sector in the ACT and universities are responsible for their own day to day management, including their revenue streams, international student recruitment targets and admissions policies.”

About 10 per cent of all students now attending an Australian university hail from China and the report says these enrolments are particularly unstable because of risk factors such as the slowing of China’s economy, the lack of full convertibility of the Chinese yuan, and fluctuations in the value of the yuan versus the Australian dollar.

Other factors that could impact enrolments are political confrontations between Australia and China, Chinese concerns about the safety of Chinese students in Australia, and changes in Australian immigration policy.

The report says Chinese concerns about the value of an international degree, the rising quality of Chinese domestic degrees and higher admissions standards, particularly English language standards, may also contribute to a drop in enrolments.

The author is Salvatore Babones, an Adjunct Scholar at the Centre for Independent Studies and an Associate Professor at the University of Sydney.

“The Australian National University has dismissed a report claiming Australia’s universities have exposed themselves to undue financial risk by ramping up the numbers of international students, particularly those from China.”

It’s very comforting to know that if the CPC gets seriously cross with Australia, there’ll be no need for a taxpayer-funded bail-out for the university sector.