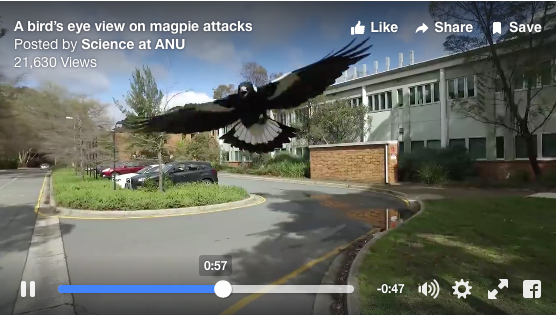 A video featuring a pair of ANU scientists wearing awful jumpers and being swooped by magpies as they ride a tandem bike across campus has gone viral, with more than 21,000 views on Facebook so far.

Dr Rod Lamberts and Dr Will Grant from the ANU’s Centre for the Public Awareness of Science appear in the video, which has resonated across campus and further afield as Canberrans duck their way through magpie-swooping season.

In July, Dr Lamberts and Dr Grant launched a live podcast from the Wig & Pen called The Wholesome Show that takes a quirkier, more off-beat look at matters scientific.

The next episode will be happen live at 7.30pm on October 12, and look at earworms and other musical phenomena, asking, “What is this mystical power music has over us? How can a simple pattern of rhythmic sounds be so mind-blowingly potent?” Book your $10 ticket here.

Have you been swooped yet this season? How do you protect your head from claw thumps as you travel around the capital?

I love magpies, but I hate getting swooped. I was attacked all over inner Canberra a couple of weeks back on what was supposed to be a pleasant weekend ride.

I have a message for the magpies of Canberra: Leave me alone, I’m not bloody interested in your babies! 🙂

They are annoying, but fortunately wearing a bike helmet and wrap around glasses I am able to pretend they are not there and continue riding. They give up in the end.

I love magpies, but I hate getting swooped. I was attacked all over inner Canberra a couple of weeks back on what was supposed to be a pleasant weekend ride.

I have a message for the magpies of Canberra: Leave me alone, I’m not bloody interested in your babies! 🙂

CSIRO did something similar back in 2010 https://blog.csiro.au/you-make-me-wanna-swoop-dispelling-magpie-myths/