Anyone else angry about the Lyneham Oval? 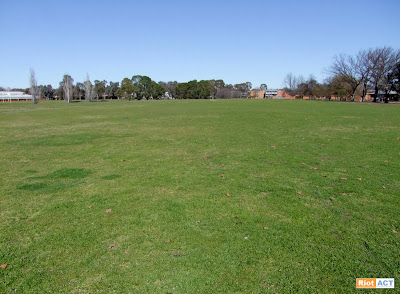 Why has part of the Lyneham oval been turned into a carpark?

[ED – anyone across this issue?]

12 Responses to Anyone else angry about the Lyneham Oval?
Filter
Showing only Website comments

And now it’s on again, they want to have more public open space for car park AND a child care facility AND an indoor spots hall AND a café for their yr 12’s (read their 2013 annual report). BUT they’re not calling it as such, they are telling the public that they are developing a community activity centre and sports pavilion with associated car parking. More than 40% of Lyneham’ population are over 45 (probably more stats a bit old) – do we really need sports facilities like these? What about hydrotherapy pool for ageing population? What about better access for the elderly – the plans show how stupid it is?
How dumb does the government think we are? And how dumb will we act? Check out post on Lyneham Oval land grab.

RobB – i agree its a bad bit of road made worse for cyclists
I suggest you call Tony Gill, Director, Roads ACT and let him know how you feel as his department approved the changes.

I agree, the ACT planning legislation has been widely interpreted to accommodate this so called development under the ‘stimulus program’ and people should let their feelings on the topic be known.

In addition to the ugliness of the carpark, the changes to the road markings have made it dangerous for cyclists. I ride through the area nearly every morning and evening. In the mornings I now have to fight for space as cars try not to cross onto the painted island and turn bay. It is a bad situation which is even worse in the evenings. Drivers are focused on staying within the narrow lane markings, not on other road users such as cyclists.

I dont know who designed this section of roadway, but I can be sure he or she is not a cyclist!

I think I’m across the issue so i will try and give the basic facts. I wont go into much detail as avenues of appeal are still being explored.

Brindabella Christian College have been using the oval (the lease for which is held by TAMS) as a car park on a temporary license for a number of months. They have now been granted a 20 year sub lease of the land that is now a car park from TAMS and are developing a car park and some sporting facilities (eg a basketball court).

Prior to work beginning there has been no consultation with the community by the school or any Govt. Depts. regarding the leasing of public land,the development of the car park and the changes to the road markings to provide a turning lane.

The development has occurred without a development application as ACTPLA indicated it is exempt under the ACT legislation changes aimed at fast tracking development using the federal Govt stimulus package money for schools. Anyone who lives near an oval adjacent to a school should be worried by this as the interpretation of the legislation applied here opens the door development without a DA for the next 3 years and the money doesn’t have to be from the stimulus packages.

If your angry about the car park and the potential for other ovals to be developed i suggest you contact the school, an MLA, TAMS and ACTPLA and let them know.

This is a topic about the damage being done to Lyneham oval. It is NOT about:
1. parents who drive 4WDs to drop off their kids at school
2. the siutability of 4WDs on suburban streets
3. whether 4WDs are safer vehicles in an accident
4. ugly kids used in marketing
5. the unattractiveness of carparks in canberra

The first post on this topic is incorrect. The ACTPLA website and Territory Plan map clearly shows the boundary of Brindabella College’s land – and the carpark is clearly NOT on this allotment. It is on the Lyneham Community Oval.

More people should be angry about this so called development. There was no community consultation, and the development is not an ‘exempt development’ under the regulations for the purposes of the Federal Governments Education Revolution’.

At the very least there the community should have been consulted.

Isn’t every footpath, median and nature strip in the ACT a carpark? Indeed, aren’t carparks a source of civic joy in Canberra. All the Albert Speer in Austerity Britain buildings that decorate this city seem to be surrounded by acres of carpark.

The Brindabella Christian School billboards at the Canberra Centre always make me chuckle. You’d think they could have found at least a few attractive kids for the lairy back-lighting.

No, parents are happy enough thinking they are driving a “safe” vehicle.

No amount of angst will change the laws of physics. All things being equal I’d rather be sitting in a three ton vehicle than a one ton buzz-box when the two collide.

Are the parents going to get lessons in how to properly pilot one of those 4wd killing machines they use to transport hteir progeny at the same time? Please.

No, parents are happy enough thinking they are driving a “safe” vehicle.

Are the parents going to get lessons in how to properly pilot one of those 4wd killing machines they use to transport hteir progeny at the same time? Please.

A man who violently beat his ex-partner while their two-week-old baby lay nearby was hugged by elders after being released...
What's On 16

This week, RiotACT published an editorial about my push to help a Canberra family who have been living in a...
What's On 16

@The_RiotACT @The_RiotACT
It could be your dream home - this spacious #Ngunnawal family property is one of the best to go on the market in a year https://t.co/hn7Z1isnmC (13 hours ago)