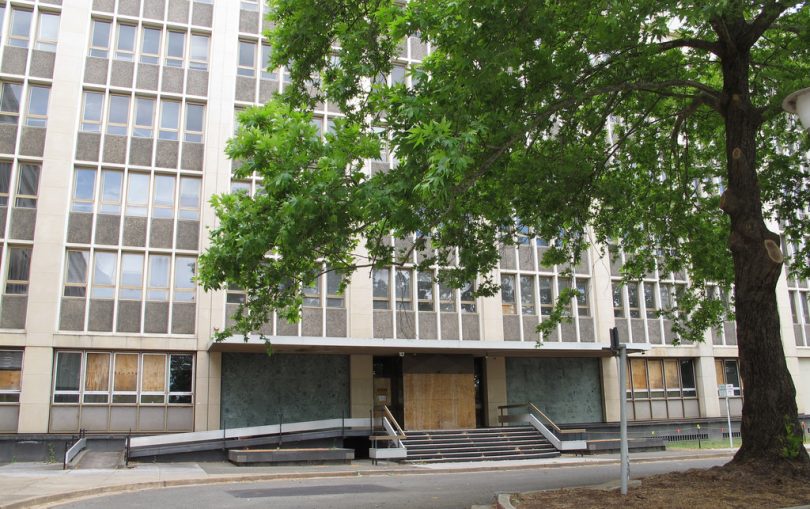 Anzac Park East has been vacant for 20 years, and the site is slated to become a housing and commercial precinct. File photo.

The National Capital Authority has approved the clearing of the landmark Anzac Park East site, which Amalgamated Property Group plans to redevelop into a housing and commercial precinct.

The Commonwealth sold the historic site, vacant since 1997, for $34.3 million to APG, which has foreshadowed a mixed-use development including apartments, commercial spaces, restaurants, a hotel, and shops.

Anzac Park East, at the intersection of Parkes Way and Anzac Parade, is a twin of Anzac Park West opposite, with the pair forming a gateway to Anzac Parade and framing the vista from Parliament House to the Australian War Memorial.

Anzac Park West was also sold off in 2017, to Sydney-based EG Funds Management for $51 million, but it will remain standing under a long-term lease with the Department of Defence. 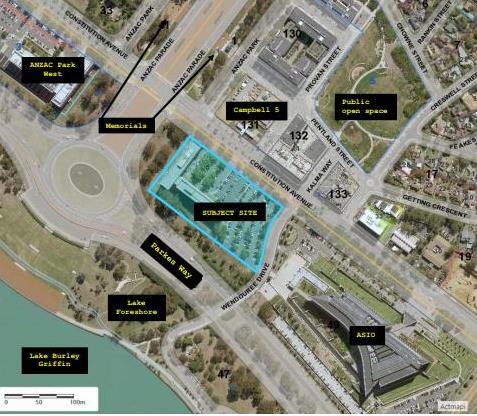 As well as ticking off on the tearing down of the office block, the NCA also approved, just before Christmas, the excavation of the car park, removal of trees and erection of perimeter fencing and advertising hoarding, which will carry the line, “A new chapter in our city’s history”.

The NCA conducted public consultation between 16 November and 7 December 2018, and received four submissions on the proposal.

The key issues were the site’s historical significance and position at the entry to Anzac Parade, the loss of trees, car parking and the need for excavation.

Architect Penleigh Boyd, citing a ‘loss of embodied energy’, believed the building should be retained and repurposed but the NCA said the National Capital Plan recognised the historical significance of the site and ensured the ‘portal’ intention was protected.

It also said the sale of the site by tender included proposals for both redevelopment and repurpose but the former was successful.

The site needed to be excavated so hazardous materials including construction waste, asbestos, potential diesel and PCBs could be removed and the land decontaminated and remediated for future use.

The trees to be removed are within the excavation area but a grove of eucalyptus trees at the southern boundary are to be retained.

Further public consultation will be needed when an application is lodged for the building works.

My first job out of school was cleaning the windows in this building.

When did private residential and hotels become consistent with the parliamentary triangle? Not to mention on THE major spiritual axis of the city. The loss of symmetry on this axis is a major departure also.

So it really does look like we’re on a down hill run in favour of $$s. So much for the symbology and idealism of the Burley-Griffin Plan and the National Capital.

To the person who thinks living next to the lake would be nice.

Visually it is but when the algae pong starts you will not be using your balcony.

I’ve been living right on the lake at Kingston. There is no smell, just glorious views.

I’d like to see something military-aligned given where it is, but I suspect the only thing military about it will be the espionage equipment pointed at the next building down the street.

Why can’t this building be repurposed and used for housing and support precinct for the homeless instead?

Lucky I didn’t buy a Sienna apartment even when the agent told me that the land across the road will never have a Development built on it due to heritage listing. Hopefully the people that did buy there still get lake views.

Love all the Anti Andrew Barr rants. It scares me that people either cannot read or if they can do not understand how the ACT/Federal relationship works in relation to the Parl triangle.

Here is a hint, the NCA is Federal government. This is a building in the Parl triangle and approval has been given by the NCA. Which is not ACT government or Andrew Barr’s responsibility.

Yes, it’s almost like people don’t understand that the NCA is the appropriate planning authority, similarly for other projects like parts of the light rail project or the Gungahlin Drive Extension…

I understand they are. What I don’t like is where the NCA is used to create political mileage which is what happened on the GDE. Massive difference.

Except that’s not what happened with the GDE at all.

The ACT government tried to railroad the statutory planning authority with an unsuitable alignment for their own political mileage. If they had engaged with the planners and the planning authority earlier they would have known exactly where they stood.

You don’t get to bitch when your unacceptable building plans get rejected.

The symmetrical nature was rather nice. Shame.

Of course, what else could they possibly develop in Canberra? It seems to be the only thing they’re capable of here….

You wallies – get your head out of the sand…. think long term, strategic and nationally. Otherwise we may as well be 3rd world 👎👎👎😬😬😬

Lisa Ries Andrew Barr cannot do anything about it (or anything else the federal govt doesn’t want/like)
This decision was made by the National Capital Authority; that’s a federal govt body

How sad . On a practical note as we do not seem to have a choice here – Imagine the traffic jams – as if the area is not already congested enough already

No get rid of it …multi storey housing near CBD is grt idea.

I think an independent body should look at that decision….seems a little bit suspicious…

I think this is such a shame. Surely the buildings could be repurposed? It would make a groovy mid-20thC hotel very attractive or could be any style inside. The symmetry of APW East with APW West should not be negotiable

I’ve been told it will be a mix of short term accommodation (hotel) with commercial and retail space. APW will suffer the same fate as APE in a few years time.

I am in favour of it being used again but wish/hope that the outside of the buildings stay as originally built. Or if they must mess with it, no more obtrusively than APW.

The main reason this one has stood empty so long is that it’s tool full of Asbestos.

I rather liked the symmetry of the two buildings too – and it wasn’t too unattractive when taken in context.

But it was pretty much always going to be demolished eventually once it was vacated.

Deb Meuronen it’s not just you, it’s deliberate, Mr B has done this before

The federal government do it too. Climate emissions released quietly a couple of days before Christmas, so no one would notice that we are not going to achieve the Paris target. 😡

Deb, if you look at all the high rise, multi level units going up all over this city, it’s a disgrace. I’m still not over the demolition of the old Manuka Theatre & the abomination they built on that site! Rant over…

I am amused that there was supposedly a period of public consultation. Well advertised, was it?

“There’s no point in acting surprised about it. All the planning charts and demolition orders have been on display at your local planning department in Alpha Centauri for fifty of your Earth years, so you’ve had plenty of time to lodge any formal complaint and it’s far too late to start making a fuss about it now…

I don’t know, apathetic bloody planet, I’ve no sympathy at all.

HHGTTG there. Where is Arthur, he should see this. 😉

He is somewhere in the ford galaxy

This is just terrible. For how much longer will we tolerate the destruction of our built history.

Rob Thomas deliberately? Or not?

Deadset deliberately. Glad we spent the money refurbing them. Now we get Units on Anzac parade what a joke.

APW will come down in under 10 years.

Janet Ilchef you read wrong. According to a 2016 Canberra times article about the two buildings being put on the market by the Federal Government the lease of Anzac Park East was 10 years plus an option for 6 and the buyer had to Honors the lease. So it will be down to 7+6 sometime this year.

It was also a condition of sale that Anzac Park West was demolished and building started on a new building within 4 years of sale. And East demolished once Defence vacates.