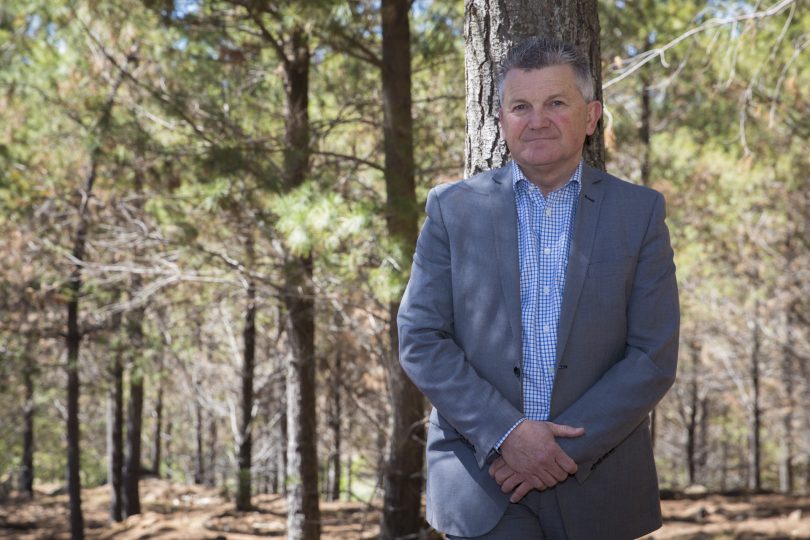 COVID-19 notwithstanding, everything is moving fast at the National Arboretum. The grass is green and Canberrans are whizzing round the paths and strolling through the forests, cooling their heels until the visitors centre and the bonsai collection re-open.

Growth is apparent everywhere, pushing up through what were once bare burned hills as the city takes the Arboretum to its heart. Hence the launch of the Ambassador Program, which aims to harness support for the Arboretum’s key projects and meet a visitor demand that is literally four times greater than any projected targets.

The Ambassador Program is described as a network of likeminded people who see the value in environment, conservation, science research, education, art, technology and recreation.

“People ring us and say they want to do something but to date we haven’t had a way to specifically direct those donations,” he says.

“The Ambassador Program gives us a prospectus to hand out to people, with ways to meet real needs as we continue to grow.”

That might mean sponsoring a garden in the Central Valley, a forest pod or gardens, barbecues, right up to donating for the planned Margaret Whitlam Pavilion gardens.

“For me, it’s about the continuation of our beautification projects, not just maintenance,” Scott says. The original concept was for 100 forests and 100 gardens and while the forests are now increasingly well established, just 31 of the intended gardens have been created to date.

The most surprising thing about the years since the Arboretum opened is how quickly and thoroughly Canberrans have taken it to their hearts.

“They come here to enjoy the place, for education, research and science – it’s a living collection. Our biggest supporters are Canberrans. Every time locals have a visitor who arrives on holidays, they bring them here. People will turn up 10, 15 or 20 times per annum,” Scott says.

“They love the concept, the atmosphere, they love strolling through the 20 km of tracks and trails.”

A major irrigation system investment has delivered individual drip systems to all 44,000 trees, regulated by a computerised system and several weather stations that determine how much water individual trees need.

Two days of soft, soaking rain means the water can be switched off for a few weeks, while the system will respond differently to a heavy downpour with lots of runoff.

“We now know exactly how much is being delivered to each tree”, Scott says. “Sensors monitor how the moisture is moving through the root systems and the soil profile. It used to be a bit pre-historic in the past, but we’ve now ensured the longevity of the collection by tailoring the watering systems for maximum efficiency.

“We have enough water for the next 30 to 50 years, and that means we can water for growth not just survival.”

Micro-climates are starting to evolve as a dozen or more forests reach the canopy stage. That means that there’s less mowing maintenance, but also that deep root systems are in place and losses are less likely in a dry season.

Scott says the Arboretum is hoping the Ambassador Program will help to ensure growth for up to a decade. There are platinum, bronze and silver support levels for donations, which will be acknowledged on the site and are also tax deductible.

“We were supposed to have a million visitors in the first five years. All the vision and strategy was designed with those figures in mind. But we’ve just ticked over four million in that time period,” Scott says.

“We thought it would take a while to get to the third phase where we take people into the forest but we are there already, we’ve had to bring that planning forward. It’s like Pitt Street with people on bikes out there in the mornings.

“We are getting into a really, really good space now, it’s an exciting time to see so much planning and work coming to fruition.”

You can find out more about the National Arboretum Ambassador program here.

While the Visitors Centre and the Bonsai Collection are closed until further notice and guided talks, walks, educational groups and public events have been cancelled, the Arboretum grounds, the Pod Playground and Himalayan Cedar picnic area are open.

It’s really well done. Can’t wait until more of the forests are more mature. The cafe and restaurant are top class too. Fabulous views!

George Watling - 1 hour ago
A recent OECD review of 300 Urban Planning studies from across the world has demonstrated that increasing the compactness of... View
George Watling - 2 hours ago
This story is not based on evidence or research. Higher density planning policies have been driving up property prices around... View
chewy14 - 5 hours ago
BJ, $2500 in rates is a block value of around $340000, you aren't talking a cheap piece of property. The rates are set based... View
News 1

chewy14 - 4 hours ago
And the m9ney is going to be completely used up in one day. Honestly, this is beyond a joke how incompetent the ACT governmen... View
Community 5