Are you in the path of a storm? Figures reveal our most vulnerable suburbs 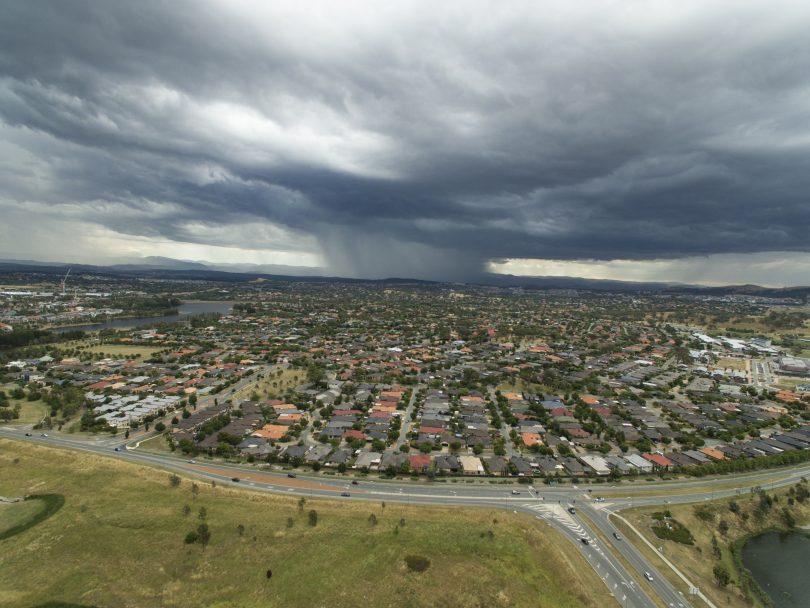 Canberrans are warned about severe weather conditions, especially in Belconnen and Tuggeranong areas.

If you live in Tuggeranong or Belconnen the odds are that a major storm is going to wreak some havoc in your suburb this storm season, according to figures issued by NRMA Insurance.

Nicholls in Gungahlin was second but the rest of the list is filled out by Belconnen suburbs Kaleen (5), Evatt (6), Fraser (7), Dunlop (9) and Macquarie (10).

NRMA said that more than a third (36%) of all home claims in the ACT during the last financial year were the result of storm damage.

Although this was down on 2015-16 when 57 percent of all home claims were caused by storms, 2015-16 was a particularly severe year for storm damage, with claims well above Canberra’s five-year average of 38 percent.

“While this year’s data in ACT shows a decrease in the amount of home claims caused by storms, it’s important to note last year was a particularly severe storm season in ACT. The number of home claims caused by storm damage this year has returned to the long-term average in Canberra so it’s critical that residents understand that severe weather can strike at any time and preparation is key to limiting damage,” an NRMA spokesperson said.

“Little acts like trimming branches, clearing your gutters and securing loose items in your garden or balcony can make a big difference when severe weather strikes. We also recommend that people check that their home and contents insurance is up to date, just in case the worst should happen.”

For more information on preparing for storms go to http://esa.act.gov.au/community-information/storms-and-floods/

Call the State Emergency Service on 132 500 for help in floods and storms.

Vasa Krculj - 37 seconds ago
Novak, a great sportsman and a generous human being who donated $1 mil. to the NSW bushfire victims. He must be the first spo... View
Evan James - 8 hours ago
Well said, Tim!✔ View
chewy14 - 9 hours ago
"And the federal border force was happy to let other players through, on the same exemption, before ND arrived." Who were the... View
Community 107

Steve Aust - 27 minutes ago
Colin Parton tell 1 story here View
Louise Flint - 57 minutes ago
James Daniels I was sent there for advice before I took a redundancy package. They ignored my superannuation and taxation que... View
Patrick Barrett - 4 hours ago
Dylan your fault View
News 22