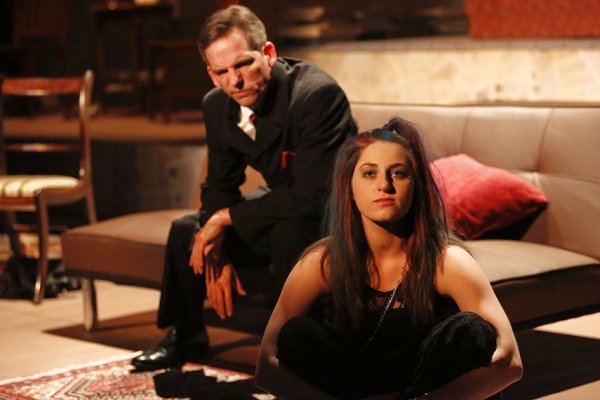 August Osage County finishes with a whispered quotation from T.S. Eliot’s poem The Hollow Men: “This is the way the world ends.” We are invited to complete the quotation ourselves: “Not with a bang with a whimper.” But this isn’t a play of graceful endings, it’s a play of fighting desperately (and perhaps hopelessly) against loss and an onrushing darkness. Dylan Thomas provides a more appropriate epitaph for the play: “do not go gentle into that good night.” Cate Cleland’s production focuses on strong character acting and will compel audiences with its liveliness and powerful depiction of how difficult it is to escape from your past.

Rewinding to the start of the story, we meet Beverly Weston (a brief but engaging appearance from David Bennett). A once-great poet, he is now a cheerful alcoholic taking refuge in a clutter of books from his hard, pill-popping wife Violet (an amazing performance by Karen Vickery). Beverly is interviewing a new cook and housekeeper (a withdrawn and mysterious Linda Chen) to take over some of the tasks that, Beverly wryly confesses, are beginning to interfere with his drinking. The house is already a mausoleum with Beverly and Violet doing a full dress rehearsal for death.

In the next scene we are only a little surprised that Beverly has now gone missing – perhaps hiring a housekeeper was his last official act of business as family patriarch. The extended family now begin to congregate in the family home. Some of them hold out hope that Beverly has just gone on an unannounced fishing trip and will walk back in the door, but others can sense the finality of this disappearance: Beverly will not be coming back.

The cast is massive, and as more members of the Weston clan trickle back to the family home the house begins to come to life, culminating in an amazingly lively family dinner scene. And like any large family, there are plenty of secrets, and with everyone packed into the one house they begin to explode like firecrackers. But without detracting from the vivid work done by the large cast, this is really Barbara’s story (played by Andrea Close). Barbara is the eldest daughter and a forceful personality, the only person capable of taking charge – and the one cursed with responsibility for all the others. Andrea Close’s performance is spectacular: tough, anguished and often seething with hate but sometimes revealing a child-like vulnerability. She hates her mother but she is also a little girl grieving for the loss of her daddy. With her husband leaving her for a younger woman, her daughter completely switched off and her mother trying hard to desecrate the memory of her beloved father, we always feel that circumstances (and perhaps the script) are conspiring against her.

The set is striking, trying to squeeze a large house into the intimate space of the courtyard studio by scattering separate rooms across a multi-level stage. The effect is as though a doll’s house has been tipped upside down, or perhaps as though a bomb has blasted the roof off a house and the residents are too shell-shocked to realise they are now walking around in a ruin. The feeling of chaos is appropriate to the play (and is unintentionally strengthened by a few clunky scene transitions). However having the entire house laid out like this created some strange effects. From my seat in the audience events taking place near the entrance of the house were immediate and intimate, while I had to peer into the distance to see what was happening in the dining room. When the entire family are finally all seated at the dinner table they are crowded in at all sides so all I could really see were people’s backs and the occasional face poking through. It was an interesting effect, as though I was snooping on a private family event, but it was also disorienting: why wasn’t such a key scene front and centre? At another point two characters furtively smoke pot on the dining room table – were they just hoping nobody would smell anything the next day? While the set does strain to contain the action of the play at points like these, for the most part the feeling of haphazardness and wildness resonates with what the characters are feeling.

This is a production where the hate in the family is clear and the love that connects them is less obvious. Liz Bradley as Aunt Mattie Fay has a sinister contempt for her gentle son Little Charles (Ethan Gibson) right from the start, and it warns us that something has gone deeply wrong in this family – we get the feeling that the ones who have run off would be wise to stay away. As the story develops more love shines through, culminating in a tender moment where Barbara, Violet and the two other sisters (Lanie Hart and Karen Weston, the stars of their own sub-plots) get drunk and finally unwind around each other. But it’s a long road to get to that point. This isn’t a play about darkness hiding in still waters, it’s about the light that can still be found even in the depths. In the end I wondered if there was something we weren’t being told – was Barbara, like her mother, secretly an alcoholic? August Osage County is a rough ride, but a rewarding one: its treatment of the darkness, light and shades of grey in family life is something everyone can connect with.

Where: The Courtyard Studio
When: Runs until November 2
Time: 8pm
Tickets: www.canberratheatrecentre.com.au/site/what-is-on.php?detail=august-osage-county-0643

Lin Van Oevelen - 4 seconds ago
I am still looking for a great pad thai on the Northside. One of those simple dishes that requires real skill to get right, I... View
Salima Haidary - 1 hour ago
Kinn Thai used to be good, sadly no more 😭 View
Elise Quodling - 4 hours ago
David Gray research? 😉 View
Opinion 53

Karan Campbell-Davis - 8 hours ago
That's right, build more of those ugly, high density dog boxes, just like Sydney! 🙄 View
William Coats - 16 hours ago
what impact will further development in the Sullivans Creek catchment have on future flooding in Oconner and Lyneham. These a... View
Community 5

Jorge Gatica - 15 hours ago
Tom Porter they’ll have to de-moth and clear the spider webs first View
William Coats - 16 hours ago
will this announcment be followed through? or is it just another news headline like most others about health in the ACT View
Community 11

Who would have thought that Canberra's Nick Kyrgios would morph from tennis brat and national embarrassment to statesman of the...
Food & Wine 9

@The_RiotACT @The_RiotACT
After a tough few weeks for the team at Mogo Wildlife Park, the surprise delivery of a leggy new addition was a treat for visitors & staff https://t.co/Pc3ECJmQgp (30 minutes ago)