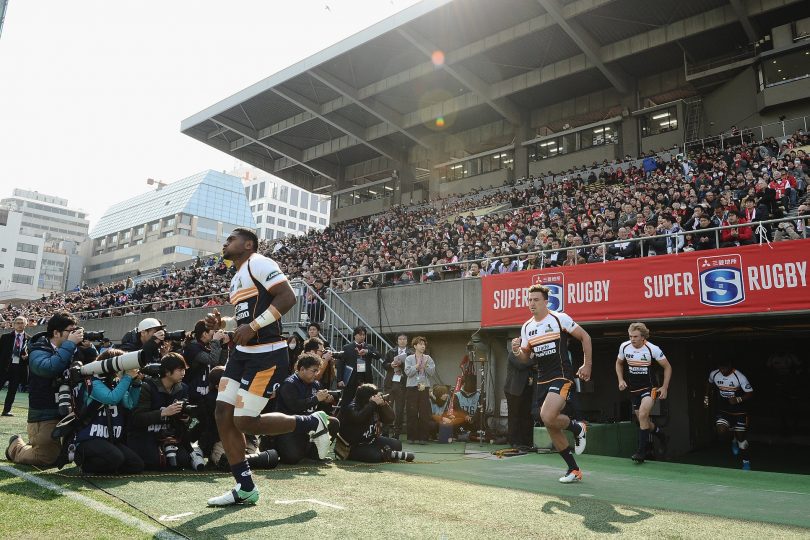 Brumbies CEO Michael Thomson said the Canberra side was very pleased with Austbrokers’ increased support of rugby in Canberra. Photo: Supplied by Brumbies.

Austbrokers Canberra has extended their rugby partnership with the Brumbies by becoming back of shorts sponsor for the local side for the duration of the 2018 Super Rugby season.

Austbrokers Canberra is a local Canberra business that has been operating in the nation’s capital since 1983. The insurance broker was already a major part of the Brumbies team by being the official membership partner of the club.

Brumbies CEO Michael Thomson said the Canberra side was very pleased with Austbrokers increased support of rugby in Canberra.

“Austbrokers Canberra have already demonstrated their commitment to the game in the ACT and the surrounding region by their sponsorship of the Brumbies and we thank them for extending their involvement by becoming back of shorts sponsor.

“We are looking forward to working with Austbrokers Canberra throughout the 2018 Super Rugby season and beyond,” Mr Thomson said.

Austbrokers Canberra managing director, Greg Johnston, was excited by the expansion of the partnership, with the Super Rugby side having already been a valued member of the Brumbies suite of partners.

“Austbrokers Canberra have been proud supporters of the Brumbies for a number of years and it gives me great pride to partner with this iconic sporting entity again in 2018,” Mr Johnston said.

“This partnership allows us to demonstrate our support not only on the field but also through the delivery of our insurance solutions.”

Austbrokers Canberra has over 120 years of collective experience in the insurance industry with their team having a wide-ranging scope of expertise and specialist knowledge.

Peter Jovanovic - 9 seconds ago
Jilly Beans big bootlicking energy there. View
Lee ONeill - 40 minutes ago
Albert Jacka perhaps read the article. View
Kate Le-Goat - 3 hours ago
Marc Blackmore as with modelling, the facts behind what happened when NG was paused are there for all to see - Google is your... View
News 225

Kit Oates - 8 minutes ago
Sounds like it could use reviewing to ensure its safe, though given the extent of the damage I have a strong suspicion that i... View
Rebecca Russell - 1 hour ago
Francie Bennett yeah I did too . View
Donna Robinson - 1 hour ago
A big Happy birthday to my dear friend Anne. Have great day View
News 3

ChrisinTurner - 20 minutes ago
It is interesting that our governments promote densification while at the same time moving government services away from the... View
austted - 3 hours ago
This is a mean and miserable decision that makes the Centerlink service in Canberra go from bad to worse. Probably happening... View
Brianna - 5 hours ago
This is going to be a disaster for so many vulnerable people who live in the city and it's closer surrounds. I know for a fac... View
Property 42

Dale Janssen - 1 hour ago
Greg Myat the speed limit was dropped from 60 to 40. View
News 7

dingus_maximus - 2 hours ago
Not to mention, halfway through our lockdown, moving the vaccination rates to include 12 and over where every other jurisdict... View
chewy14 - 3 hours ago
JC, Yes, the national plan that NSW are following more closely than Barr and the ACT government were and are. The national pl... View
buzz819 - 4 hours ago
Why can't the gubment use the same terminology as the rest of Australia in relation to transmissions??? Linked, or under inve... View
News 1

54-11 - 3 hours ago
They say that when the cause of a fire cannot be determined, just follow the money. View
Opinion 3

chewy14 - 4 hours ago
The Federal Government has paid out hundreds of billions of dollars of support payments throughout the pandemic so to claim t... View
Business 10

@The_RiotACT @The_RiotACT
Chief Minister Andrew Barr said the ACT's new pathway out of #lockdown was triggered by hitting the 80 per cent #vaccination target and not a response to changes in NSW https://t.co/ZVeJRxndHb (7 minutes ago)

@The_RiotACT @The_RiotACT
It's been quite a journey for the Nimmity Bell, but the tiny #Monaro community will finally #celebrate on Saturday after a long and improbable saga https://t.co/8xTA8gFR4V (2 hours ago)