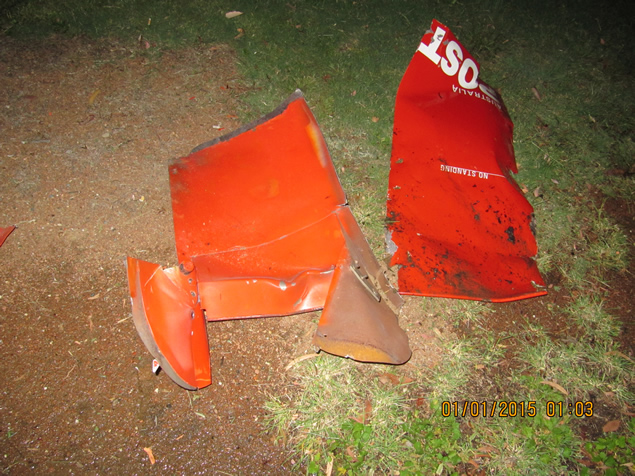 ACT Policing is investigating the property damage of an Australia Post box, destroyed in Calwell during the early hours of Thursday (January 1).

About 1.45am, Tuggeranong Patrol members responded to reports by several residents of fireworks being set off in the area of Pennington Crescent, Calwell.

Witnesses told police that about 1.20am, two males were seen to approach a large Australia Post box and then quickly flee the area on foot. Moments later the post box was destroyed by an internal explosion.

The force of the explosion tore through the metal post box and scattered metal debris over a 10 metre radius.

Intelligence and Crime Reduction Acting Superintendent Melissa Bushby said the incident was reckless and could have resulted in serious injury.

“It’s fortunate that that no one was hurt and the offenders didn’t become the victims of their own irresponsible prank,” A/Superintendent Bushby said.

The offenders were both described as being males of African appearance, about 198cm (6’6”) tall, of slim build, of a dark complexion and aged in their 20s. One male was wearing a black hooded jumper and carrying a back pack and the other was wearing a grey hooded jumper.

Police are urging anyone who may have witnessed the incident or any suspicious activity in the Calwell area around 1.20am on New Year’s night to contact Crime Stoppers on 1800 333 000, or via www.act.crimestoppers.com.au. Information can be provided anonymously.

This scale of damage wasn’t caused by “fireworks”.
Given the description of the suspects and the presence of a backpack I am surprised this incident was not described as an act of terror.
Have the police arrested the suspects yet?

Dan Rayner - 6 hours ago
Katie I had so much practice with you 😂😂😂 View
Katie Licciardo - 6 hours ago
Dan Rayner you love it don’t you View
Andrew Dale - 9 hours ago
Ash Claire dont you know anybody who has had problems with being able to afford to pay their rent. View
News 16

Vera Bachinger - 6 hours ago
So we are going to be the victims of more double dipping.. View
Slobodan Paunovic - 7 hours ago
Marc Edwards don't worry about it, can only be more expensive and some sort of public robbery...they need funds for parties a... View
Tom Adam - 10 hours ago
Jorge, yes I was basing my comments on the current claim. View
Opinion 19

Christie Le Goy - 6 hours ago
George Prasad hooray for you, no wonder you're such a gorgeous family xxxx View
What's On 3

Stephen Fallon - 9 hours ago
I'm sure every one of these people consider themselves good drivers. If we put a fleet of unmarked police cars on the roads,... View
show more show less
*Results are based on activity within last 7 days

Chief Minister Andrew Barr comes back to work today after a post-election break and needs to clean a couple of...
Best of Canberra 25

@The_RiotACT @The_RiotACT
Two ANU academics have claimed that it was only by "good luck" that flaws in the ACT's electronic voting system did not impact the final vote https://t.co/EOE1MfZeLC (1 hour ago)

@The_RiotACT @The_RiotACT
A woman in her 20's who arrived in Canberra this week on a repatriation flight has tested positive to COVID-19 while in quarantine https://t.co/8XHzMT3QbB (3 hours ago)

@The_RiotACT @The_RiotACT
Canberra has a million stories and secrets, and Marg Wade will be exposing them on The Canberra Page. Here are a few to get you started https://t.co/OhyfA6nc0O (3 hours ago)