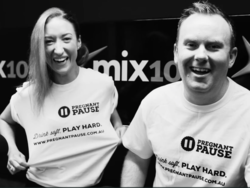 About Kristen and Rod

Kristen Henry is one of Canberra's best known radio personalities and is one half of Kristen and Rod for Breakfast on Mix106.3. She is a local MC, stand-up comedian, weekly columnist for HerCanberra, Canberra Weekly and The Canberra Times, and an ambassador for Pregnant Pause.

Rod Cuddihy makes up the other half of popular Canberra radio duo Kristen and Rod for Breakfast on Mix106.3. He is host of the Pinheadz Pinball PODcast, father to two daughters, and an ambassador for Pregnant Pause.

Jack Wiles - 20 minutes ago
It's not the type of meeting place depicted by so many comments; it's not somewhere you would take young family but is a plac... View
News 15