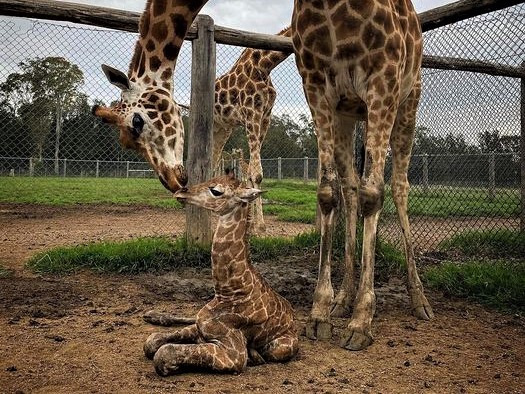 Zookeepers at Mogo Wildlife Park are celebrating the birth of a baby giraffe.

Matope was born in late November, bringing the zoo’s herd of giraffes to 10.

“He’s a beautiful little boy, and he’s already six-foot-tall and 80 kilos – so a very big baby,” he says.

Matope is a Swahili word for mud – a suitable name considering the giraffe’s first moments.

“The day that he was born, it had been raining a fair bit. Mum was nice enough to give birth to him with a nice soft landing in a pile of mud,” Chad says.

“The first video of him is gorgeous. He’s a very dark brown because he’s quite covered.”

The birth is mum Binti’s second since she had a baby boy 18 months ago and everything went smoothly.

“With all big wild animals, if we have to intervene, something’s gone wrong,” he says.

“Thankfully, mum had it completely under control.”

For giraffes, labour and birth take around three hours.

“It seems to go pretty slowly in the beginning. Once gravity takes hold, the last part goes pretty quick.”

Matope is in good health and feeding well, with zookeepers performing regular checks.

“It’s been an absolute textbook and we couldn’t be happier.”

Visitors there on the day were lucky enough to witness the birth and Matope is already drawing crowds.

“Whenever you come to Mogo Wildlife Park, you’ll see Matope with his mum Binti,” Chad says. “Completely on display and probably the cutest thing you’ll ever see.”

I’m sure being dropped into mud is a whole lot better than hard packed dirt.
Welcome, little baby 🤩

Chris Weissegger we need to go to mogo asap

Zachary off to mogo we go