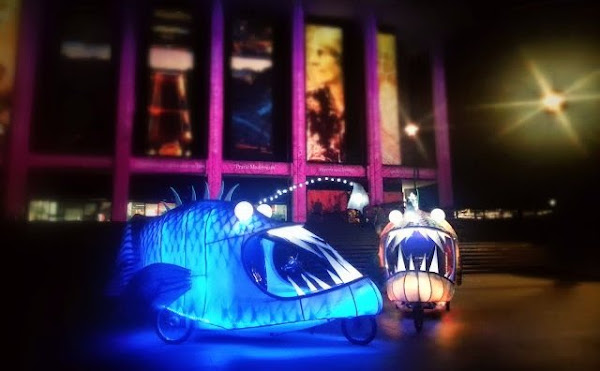 Andrew Barr is breaking out the champagne over this year’s Enlighten numbers:

More than 115,000 people attended the free and ticketed events during ENLIGHTEN 2013, an increase of 290% on last year’s figure of 29,437, according to an independent evaluation report issued today.

Enlighten, which was staged from March 1-9, with a focus on the weekends of March 1 and 2 and March 8 and 9, once again featured spectacular architectural projections and buzzing entertainment precincts mixed with late-night openings at 13 attractions. The program was varied, with something for everyone, including 52 free and ticketed events from exclusive blockbuster exhibitions to live performance, tours, talks and exclusive dining experiences – providing a memorable array of creative and surprising experiences.

Staging Enlighten in Canberra over 9 nights, with events focused on the two weekends, gave rise to increases in Gross Territory Product (GTP) totaling $0.95 million – an increase of 126% ($0.42m in 2012).

2,195 interstate and international visitors came to Canberra specifically to attend Enlighten or extended their stay because of it – and of that total, 1,135 of them stayed for one or more nights in the ACT. The average visitor stay in Canberra was almost three nights.

Enlighten has truly cemented its position as a creative and innovative cultural event of national significance and is carving its place as an iconic Canberra event, delivering on the vision the ACT Government set out three years ago.

Independent analysis of Enlighten media coverage found news stories reached a cumulative potential circulation of 5.5 million people, to the value of a record $1.1 million. This represents an increase of 35% on the 2012 results ($800k) and the highest value ever.

There was a balanced mix of age groups at Enlighten 2013. For ticketed events the 25-34 year age bracket was the main group, while the free entertainment precinct attracted a mix of ages, from 60-plus (25%), followed by 20-29 years (21.3%) and 40-49 years (18.8%). This shows that there is a greater variety of activities programmed at Enlighten, offering something for everyone.

But where was the Pollock Pong?

Its not Enlighten without it

Well, it was bloody good.

i rather think i’m missing something here…

This was a great event, I think Barr can take it as a victory

Well, of course he would say it was a success wouldn’t he?
Funny how he has obtained an independent evaluation as to how many people attended, what demographic they were and how much they spent etc. but this same insight is not available after the NGA exhibitions which Barr gives $500K to on a regular basis.

Honestly, get the Skywhale to this event each year. Imagine her floating above all this, keeping an eye on us, safely observing her children at play with those ever watchful eyes and motherly breasts reminding us that we all belong.

…each boob lit a different colour…

I loved Enlighten. Next year, I’m going the whole nine yards and taking a picnic dinner.

Enlighten was pretty great! Skywhale stamp of approval.
I am pretty keen to see this become more successful as time goes on.

Honestly, get the Skywhale to this event each year. Imagine her floating above all this, keeping an eye on us, safely observing her children at play with those ever watchful eyes and motherly breasts reminding us that we all belong.

Kevin Knudsen - 6 minutes ago
Christine Tancred or perhaps.. Federal government.... View
Christine Tancred - 12 minutes ago
I hate it when reporters refer to politicians or parliament as Canberra. We don't own them, we didn't all vote for them, and... View
Elouera Lea Lindquist - 6 hours ago
Timmy Holness officially the coldest hot-spot in Australia 🙄 View
News 5

Paul Chubb - 1 hour ago
Finland housing first is best practise. The idea is to place the homeless in normal housing: rental apartments etc and then w... View
Mathew Richards - 4 hours ago
Civic Flats, The great Wall in Melba, Mawson Units, The Narrabunda Housing, Oaks Estate. This is nothing new. The biggest pro... View
Gregg Heldon - 6 hours ago
Amanda Evans it's not a bad idea View
News 6

Michael McDonald - 3 hours ago
Or we could just invade NSW. View
Nell Feneck - 10 hours ago
The killing of Canberra View
Kerry Mulgrue - 12 hours ago
Just points out that the very existence of States and Territories is an anachronism. View
Food & Wine 15

Nikos Manikas - 4 hours ago
plus i also think it would be un realistic, the NRL try to get Canberra to avoid playing a game here if they can when possibl... View
Steve Wood - 10 hours ago
We should now get Warriors and Gold Coast as QLD shut down the borders to NSW and the ACT this weekend View
News 48

@The_RiotACT @The_RiotACT
The Spit Shack has come a long way since its humble beginnings and is now serving its simple, flavour-packed Croatian cuisine at two locations in Canberra https://t.co/CR61qvqPm9 (43 minutes ago)

@The_RiotACT @The_RiotACT
The ACT Government is fast-tracking plans to bring more shops to the service-starved Molonglo Valley as it revealed that it had pursued buying back the ill-fated Coombs shopping centre but negotiations had broken down over price https://t.co/HpfOFUQyds (2 hours ago)