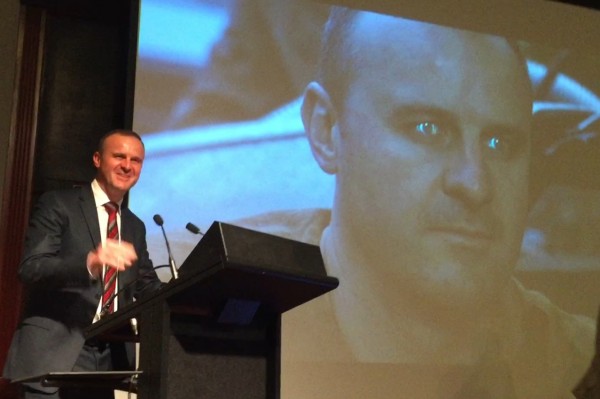 See ACT Chief Minister Andrew Barr as you’ve never seen him before, appearing in a cameo role involving mind control and frightening looking eyes in the Canberra-produced feature film Blue World Order, which will appear in a special preview as part of the Canberra International Film Festival on Saturday, November 5.

Festival organisers played a trailer for Blue World Order as an introduction to the Chief Minister, who spoke briefly about making his acting debut.

“I have to particularly thank Che [Baker, the co-director of Blue World Order] for the opportunity to begin my acting career,” Mr Barr said.

“I will say that before this festival, we have a festival of democracy, and I’ll apologise in advance that you will see me on your screens in the next five weeks, but I promise I’ll have a speaking role in addition to the mind control.

The festival will showcase twelve Canberra short films and four Canberra feature films this year in addition to its focus on contemporary and critically acclaimed historic cinema from around the world.

“The creative arts are taking a much stronger role in our city life, and that makes Canberra a better place.

“This year, we are lucky to have an incredibly strong program supported by passionate people with a view to a long term for the industry in Canberra, and I think that is the most exciting thing.”

Blue World Order is a sci-fi film set in a post-apocalyptic world where a deadly electromagnetic pulse has wreaked havoc and released a virus into the population. Only one man is immune to the virus and as the only child to have survived, his daughter is the key to the survival of mankind.

Canberra writers Mr Baker and Dallas Bland are the directors of the action adventure film, which was shot in and around the ACT and financed privately in the Territory.

The Canberra International Film Festival runs from October 27 to November 6 at the National Film and Sound Archives. Book tickets and see the full program at ciff.com.au.

I think Barr would be better suited to fantasy movies.

That’s how he looks when he decides to up to triple Annual Rates, introduce new levies, sign contracts for the loss making tram, etc.

But yes. Ultra bad look. Or total arrogance. Or maybe preparing for a new “onscreen” career after the October election ??

Capital Retro - 30 minutes ago
The service provider was massively subsidised by the public purse via the virtue signaling government. View
whatwik - 16 hours ago
Shock, horror! - it's true! The NSW Liberal Party wants "to charge up the Nation and make NSW the Norway of Australia when it... View
News 3

nobody - 44 minutes ago
I agree the trend is away from fossil fuels, so that all our coal derived electricity, gas derived heating, and and oil deriv... View
chewy14 - 2 hours ago
Nobody, Except the clear evidence is that the transition away from fossil fuels is well underway with renewable energy source... View
nobody - 3 hours ago
The day EVs stabilise the grid, will be the day pigs fly. In recent proclamations, this regime has told us that gas will be p... View
Property 1

Stuart Green - 1 hour ago
Scott Bell Thats obvious, they'll light us up for more on the other 4 days... View
Community 14

astro2 - 2 hours ago
If you would prefer to take your own private motor vehicle to the shops then you may continue to choose to do so. However the... View
Deborah Gale - 3 hours ago
Flannie! View
Douglas Ryan - 5 hours ago
Bruce Rossel flanno everyday to become a thing View
News 1

John Moulis - 5 hours ago
They look a bit like mushrooms. It could be symbolic in that veterans were treated like mushrooms when the issue of agent ora... View
Stephen Mee - 15 hours ago
Did the same person that signed off on those hit air balloons, sign off on this also. Money could be better spent on real sup... View
News 47

@The_RiotACT @The_RiotACT
They rescued their cattle from the #Braidwood bushfires only to lose their home and herd in the floods - but Peter and Tracia are soldiering on https://t.co/4porXDUR3I (1 hour ago)

@The_RiotACT @The_RiotACT
New generation EVs will be more than just cars. A pioneering trial in the ACT will test how they can also power the grid and your home https://t.co/byIcnaEyUT (4 hours ago)