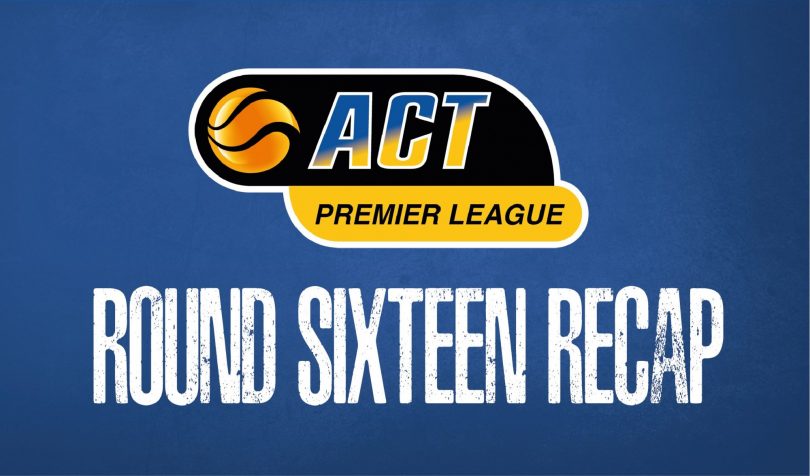 Classy performances and entertaining match ups headlined round 16 of the premier league competition. One side remains unbeaten but has rivals hot on their heels as the race to the finals in all competitions begins to heat up.

A basketball master class broke the hearts of Rats players on Wednesday night, as dynamic duo Callie Bourne and Emma Rowecliffe combined for 50 points in a hard fourt victory against a resilient Rats outfit.

Despite trailing for the majority of the game, the bottom of the table Rats put on a gutsy effort in the fourth to make for a nailing biting finish at Belconnen basketball stadium.

Norths settled into the game early in the first, getting out to a six-point lead midway through the term however Rats steadied and a Yar Mayen bucket saw them take a 18-16 lead at the end of the quarter.

A strong Rats quarter shocked Norths into gear and Callie Bourne and Emma Rowcliffe took centre stage. Combining for 25 points, the pair looked in perfect sync as they put Rats to the sword. After seven unanswered points deep in the second, Norths not only regained control but enforced a 12-point lead at half-time 29-41.

The story of the second would continue early in the third with Emma Rowecliffe scoring the opening 10 Norths points and helping her side push out to a 15-point lead at the halfway mark.

Rats Sarah Cooper fought hard to regain ground against the third placed power house scoring five unanswered points to close the quarter. However, the damage was done early and Rats were still behind 46-57 going into the final period of regulation.

The last-minute heroics from Rats Sarah Cooper got the team fired up and despite trailing, they held momentum. Coming out of the break with a point to prove, Rats dominated play early and it showed on the score board. The girls put on 11 unanswered points and a Nikki Worner bucket had them draw level 57-57.

Norths wrestled for control but Rats weren’t giving up, both teams prepared to fight till the final whistle for the round 16 result. Rats Sarah Cooper, nailed a three to take the lead late in the fourth but Norths Callie Bourne replied and with a couple of clutch free throws the Capitals Academy guard had them back in the box seat.

After a thrilling final quarter, Rats were forced to foul Norths in the pursuit of victory but fell agonisingly short as Norths took home the victory 66-69 in the match of the round classic.

Vikings Ethan Fowler was near unstoppable on Wednesday night as poured on 37 points in a shooting masterclass against the Ginninderra Rats in a top of the table clash.

Rats managed to hold a lead against the unbeaten league leaders for a large portion of the game, however despite going into the final term ahead Rats weren’t able to hold on as Vikings escaped with a 97-92 victory.

The Tuggeranong Vikings may have been the form side in the competition but it was Rats who were able to take control early. Rats Nathan Brown nailed a three pointer to cap off a 2-9 run mid-way through the first quarter.

Vikings looked to settle and Ethan Fowler started to turn on the heat, scoring 11 points late in the term to have Vikings sitting level at 22-22 at quarter time.

The slow start to begin the game looked to be behind Vikings as they set the tempo early in the second, Stephen Rowe helped his side regain momentum and enforce a six point lead.

Rats Nathan Brown wasn’t ready to let the competition favourites run away with it, hitting three unanswered three pointers on the cusp of half-time giving Rats a slim two point advantage going into the break.

Vikings Ethan Fowler would draw first blood on the back end of the break, draining two free-throws to draw the game level at 52-52.

The lead would go back and forth in the third as both sides wrestling for control. Rats would jump out to a four point lead mid-way through the term but Vikings Ethan Fowler, Glenn Morison and Stephen Rowe had them steady and retake to lead.

The see sawing quarter would again take another change as Rats Nathan brown and Jordan Phillips combined for 10 points late to give the away side a 74-77 lead going into the final period.

Rats Christopher Brocklehurst scored five quick points to push their advantage out to eight early in the fourth but were not able to hold momentum.

Vikings Glen Morison and Ethan Fowler would prove vital as the pair put on 17 points in the final quarter forcing Rats to foul in pursuit of victory.

Ethan Fowler and Stephen Rowe would make the difference late, landing 4 clutch free-throw attempts and handing Vikings a 97-92 victory to remain unbeaten after 16 rounds of competition.

Basketball ACT is the state governing body and competition administrator for the sport of basketball in the ACT region. Through working alongside The RiotACT to promote local basketball, Basketball ACT hopes to help grow the game in Canberra.