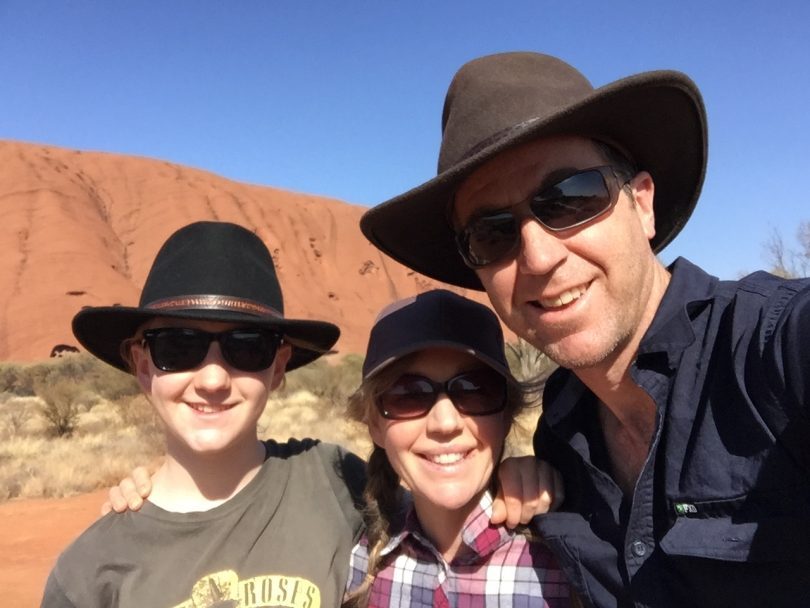 A Bega family has been rescued by the Royal Australian Air Force between Laverton and Coober Pedy; straddling outback South and Western Australia.

Adventure and isolation has always been something Steve Scrivens and his family built into a holiday, but these most recent school holidays had twists and turns they are still wrestling with.

“It’s a case of be careful what you wish for,” Steve says with a chuckle.

“We like doing the Simpson Desert and exploring inland Australia – that’s what we do for our holidays.

“And this recent holiday we planned ticked all the boxes – remote, rugged, slightly risky.”

Steve, his wife Janine and 15-year-old daughter Lara set off on the 1,324km Ann Beadell Highway which cuts through the sand dunes and spinifex of the Great Victoria Desert. 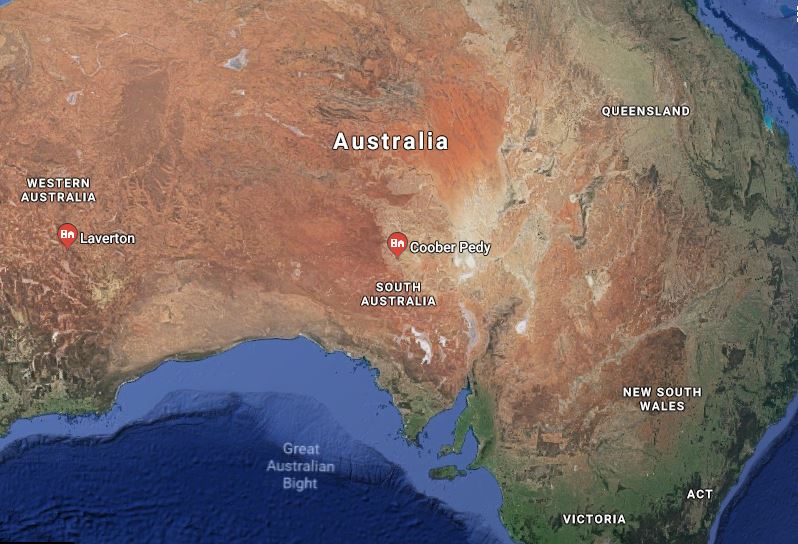 The motoring guides say travel is slow and traffic non-existent on this unmaintained and largely untouched track, with the Aboriginal-run Ilkurlka Roadhouse the only stop for fuel and supplies at the halfway mark.

“And you need four permits to cross it,” Steve says.

“One of which allows you to cross the Woomera Protected Area (WPA) – it’s an Air Force testing area and they close that from time to time, the other permits allow you to travel through Aboriginal communities and land, so this is for the die-hards really.

“It takes about four or five days to cover 800km, it’s pretty gruelling but very appealing to me because it’s beautiful and quiet – it’s the road unknown.”

The Scrivens’ had the clock on them, their Air Force permit gave them three days to get across Woomera which still wears the scars of British weapons testing which started in the late 1940’s.

“The Air Force wanted to close the WPA from the first of October for six weeks, it’s all a big secret what they do out there but they’re doing testing and exercises, but we knew all that and were prepared for it,” Steve says.

Of particular interest on this outback odyssey is the atomic bomb testing site Maralinga within the WPA.

“The British let off huge atomic bombs at Maralinga in 1956, the Poms didn’t want to do it in their backyard so they came here,” Steve says.

“It’s still radioactive and you aren’t meant to stay there, dig there, or touch anything.

“There is a monument in a park there with a bit of the history, it’s not super scary but there is still radioactivity.

“The government has cleaned it up a bit but you aren’t meant to stay too long,” he says.

Not long after stopping at Maralinga, on about day four or five of their adventure, the Scrivens’ 1993 Nissan Patrol broke down. They were stranded, mind you these well-travelled and experienced campers had everything they needed in the back of their broken car.

However, the secret Air Force exercises were about to start. 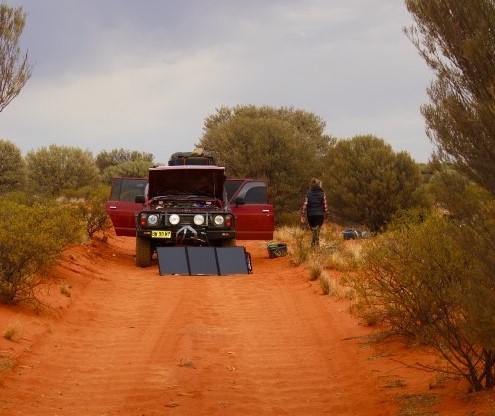 Broken down on the Ann Beadell Highway. Photo: Steve Scrivens.

“The reason we got ‘Big Red’ is that its one of those cars that starts and stops, it’s got no computer, no electrics, it’s generally very unbreakable or very fixable,” Steve laughs.

“We’ve had many successful adventures and done about 200,000km over the last five years.

“But we were the last people allowed through the WPA, there was nobody coming up behind us because the Air Force was closing the area down.”

The increased Defence activity turned out to be the turn of good luck Steve and his family needed.

“Just after we got into trouble the Air Force arrived in their Landcruiser out of nowhere, they were headed out putting up roadblocks at either end of the desert because of the testing that was about to start,” Steve says.

“They knew we were out there anyway but to see them arrive and know of our situation was a huge relief.”

Steve, Janine, and Lara, then had to camp on the side of the Ann Beadell for two days before the Air Force could come back and collect them. Birdwatching and card games helping to pass the time in their remote camp.

“We were in satphone contact with the Air Force all the time, I had to give them GPS coordinates and they drove in sirens blasting – in the middle of nowhere, it was amazing,” Steve says.

“They got out and said – ‘we saw your light was on so we thought we would say G’day.’ Too funny.

“The Air Force was very good to deal with and always ready to help us.” 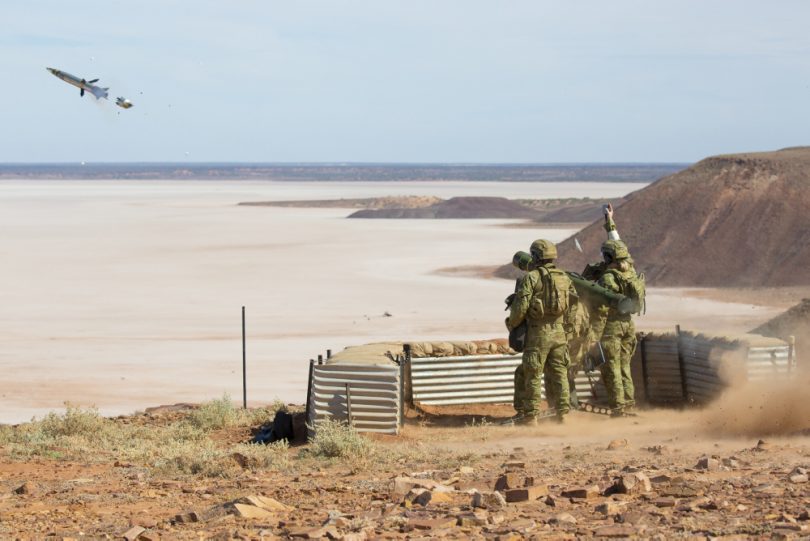 With the Defence exercises due to start the very next day, ‘Big Red’ had to stay put fully stocked with everything these Begans had brought with them.

“We grabbed a pillow and a bag and headed back to Coober Pedy where we started.”

It would be nine days before a window opened for Steve to go back and pull his car out of the desert with the assistance of Coober Pedy Auto.

“The tow took 12 hours, about three hours in and about nine hours back to Cobber Pedy, just with a strap and old beaten up Landcruiser.”

The backyard mechanics of the underground town couldn’t diagnose the breakdown, so the car was put on a truck headed for Adelaide and specialist mechanics where it remains. A cracked fuel line is the latest theory.

“There are wrecks of cars and caravans all along the way, the corrugation out there rattles cars to pieces.”

While Bid Red sat it out in the midst of Defence bombardment, the Scrivens’ headed for a hire car and fancier accommodation at Uluru and Alice Springs.

“I’ve never spent so much on accommodation, normally we camp, but the poor girls had been through so much so we decided to spoil ourselves a bit.

“Fancy accommodation is not our thing, so we rolled our eyes a bit, but we had a good time and saw the sights we wanted.”

Steve heads back to work as Head Chef at Merimbula RSL in the coming days with Big Red still broken in Adelaide.

“We wanted an adventure and we sure got one, but this isn’t over yet,” Steve laughs.

Cheese went to his head.

I think this bloke should stay in the kitchen.

Love to know how they went collecting the car

It’s at the end of article- 12 hours to Coober Pedy and they couldn’t diagnose to so off to Adelaide… we too drove through the closures on main Stuart highway this school holidays in a 2016 all wheel drive fully decked and wouldn’t have dreamt of going off road in the closing time!