Bega Valley Fire likely to grow, difficult to put in a box 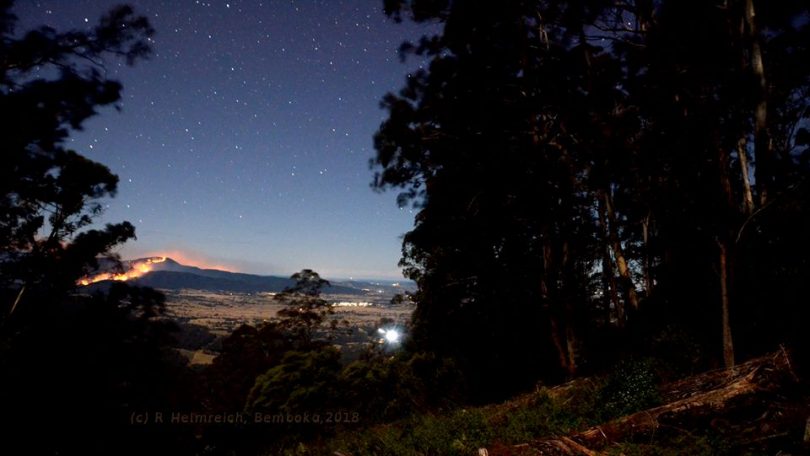 The Yankees Gap Fire is likely to grow and continue burning to the north over the next week as firefighters prepare for what Sunday’s weather will bring.

After Wednesday’s devilish conditions destroyed three homes and five outbuildings, the Bega Valley Rural Fire Service used Thursday and Friday to prepare for what was expected to be challenging conditions on Saturday.

“Saturday was largely a day of consolidation, the passage of the cold front did see fire activity pick up but nothing too alarming,” says RFS spokesperson Marty Webster.

“We haven’t had any breakouts, but Sunday’s westerly winds are the next challenge for us.”

Winds on Sunday will predominately blow from the west but may shift south-west to the north-westerly late in the day.

“Not too scary, but brisker than we saw on Saturday so we do need people to stay on guard.

“And then a few days of benign weather after that,” Mr Webster says.

“We do have trigger points set so we could see the Alert Level go up during Sunday, people need to be aware of the potential for us to go up to Watch and Act at some stage during the day.

“And they need to be thinking about how they will respond to that advice.” Firefighters from the RFS, Fire and Rescue NSW, National Parks and Wildlife Service, and Forestry Corporation have focussed on holding the fire at Double Creek, near Dorrigo and Stock Ridge Roads.

During Saturday 37 fire trucks, 100 personnel including specialist remote area firefighters, 18 bulldozers and graders and 5 aircraft worked on the fire which has grown to over 5,000 hectares.

Out of area assistance has come from Lithgow, Cumberland, Southern Highlands, South West Slopes, The Hills, Hornsby, and Armidale.

Mr Webster says residents in the Bemboka, Numbugga, Brogo area are across the situation and always keen for detailed information.

“The continuing issue is getting containment on the northern edge of the fire between the Brogo Firetrail and the Warrigal Trail and beyond, the fire could potentially more than double in size,” he says.

“The nature of the country involved in this fire makes it a difficult box to put it into.

“This will be a ‘campaign fire’ and people should take any opportunity they can to enhance their level of preparation,” Mr Webster says. In terms of the wider community response to this emergency, the RFS advice is clear.

“The best thing the broader community could do to help us is to ensure that they are well prepared so that if we get called to other jobs we don’t get tired up for as long,” Mr Webster says.

“Our resources are stretched, we need the community to do whatever they can to look after themselves.

“Don’t become a risk to your community,” Mr Webster pleads.

To stay up to date with the bush fire situation check the NSW RFS website or call the NSW RFS Bush Fire Information Line on 1800 679 737.

Philip Selmes - 13 hours ago
Andy Anderson you've got no idea about traffic engineering, have you Andy? And neither do any of the people who 'liked' your... View
Property 51

A short menu that’s long on authentic flavours is a winner in any language. A handful of traditional dishes interspersed...
Food & Wine 26

@The_RiotACT @The_RiotACT
In his boldest selection decision in his short tenure so far as Wallabies coach, Dave Rennie has elevated Brumbies fly-half Noah Lolesio to the starting lineup for tonight’s third Bledisloe Cup test at ANZ Stadium in Sydney https://t.co/CzW9RXdAqV (1 hour ago)

@The_RiotACT @The_RiotACT
How would you like to own a former goldfields hotel & lockup that has been transformed into a modern home? Here's your chance https://t.co/kH5lXeeGLB (2 hours ago)