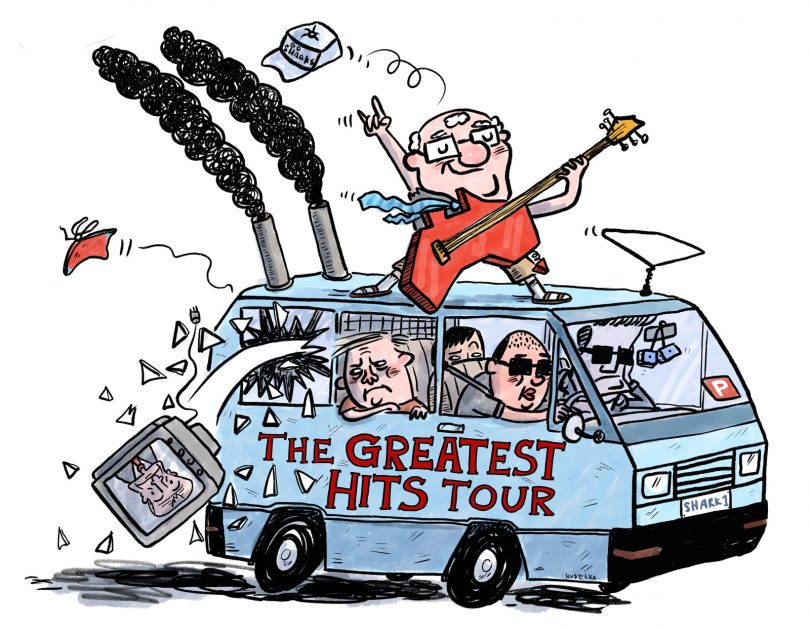 Is the pen mightier than the sword? You bet. It’s also mightier than the piano and more important than ever in this fraught world of contested truths and overblown egos, according to no less a commenter than Tim Freedman from indie band The Whitlams.

This year’s Behind the Lines exhibition at the Museum of Australian Democracy just opened and has a rock & roll theme as it explores the year’s best and most biting political cartoons. It’s the Greatest Hits tour, from global hitmakers like Boris Johnson to domestic wannabe rock gods like Bill Shorten via press raids, Adani and quiet Australians.

Scott Morrison wading (literally) into the Pacific Forum gets a run, as does Julie Bishop and her red shoes, and what must have been a welcome return opportunity for Warren Brown to draw Bob Hawke in full silver bodgie mode, raging at the ALP from a celestial cloud. 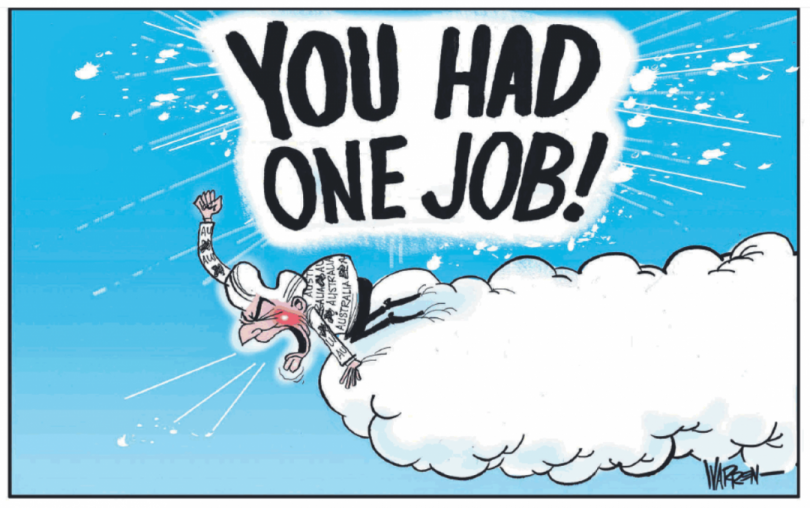 Warren Brown’s Bob Hawke, raging from the heavens at the hapless ALP.

The cartoonist of the year is Jon Kudelka, whose exhaust-belching minivan full of dodgy politicians riffing on an Australia shaped electric guitar included both dice on the rear vision mirror and obligatory P-plates.

“The great joy is that any fool with a pen and a piece of paper can do a cartoon. The further you stay away from being inside the cartoons, the better the work will be because you’ll be more in touch with the people reading them.”

Not that it’s a particularly relaxing pursuit. Kudelka describes the daily struggle to “get a coherent wrap of something political with a joke to slide down the gullet”. He adds that “if there is anything to be explained after you look at a cartoon, then the cartoon has failed”. 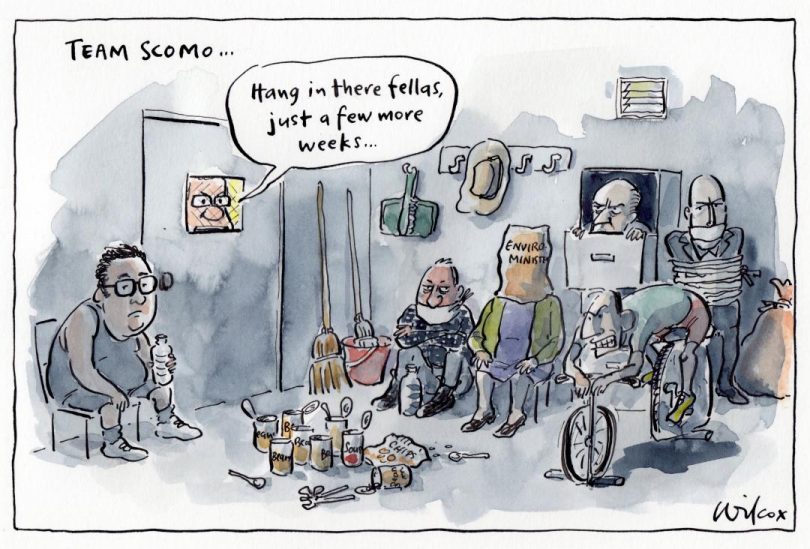 But of the power that still resides in the pen, Tim Freedman said while launching the exhibition: “Cartoonists make our government accountable. They are on the front line decrying stupidity and hubris every day and in mass circulation.

“The powerful and proud don’t like being laughed at. It’s one of the most effective landmines under their grandeur. We laugh and wince at the very moment a politician is skewered, at the elegance of the skewering and the cleverness of the skewerer.

“Why are we political artists? Because we have opinions about how things could and should be. We need to tell our truth, so if we can draw, we draw. If we can sing, we sing.

“But I know which one I’d pick in a prizefight for political influence. There’s more punch, wit and poignancy up there than you’d get from ten pop singers, three hip-hoppers and [singer] Paul Kelly.

“Well may we say the people are not watching; thank goodness the cartoonists are.”

Selected and curated by Jennifer Forest with cartoonist Fiona Katauskas, the annual exhibition attempts to sum up a year of politics and policy, but sometimes tragedy too. 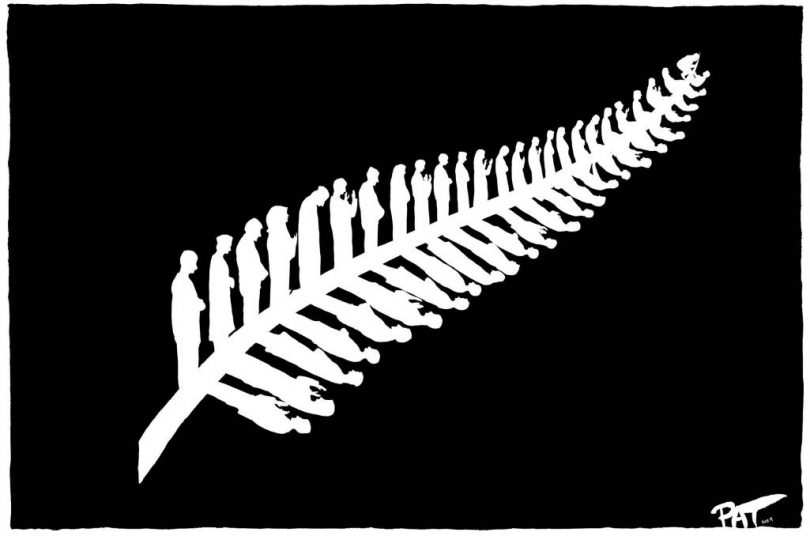 The extraordinary image of a silver fern, drawn by Canberra’s own Pat Campbell with its fronds depicting 50 Muslims in various stages of prayer, was shared around the world after the Christchurch massacre.

As MOAD director Daryl Karp described it, lauding their bravery, cartoonists “prod and question relentlessly every day. You are our conscience”, she said. A vigorous cartooning culture was an integral part of a free press and freedom of expression (issues the Museum is also exploring in its new permanent exhibition, Truth Power and A Free Press).

Kudelka was modest about the level of influence a cartoonist has but nevertheless draws a line in the sand of some significance. “Cartoonists are a sign of life that you’re allowed to get away with things without going to jail – yet”.

Behind the Lines is at the Museum of Australian Democracy, Old Parliament House. Entry is free.

Brett Wheeler - 4 hours ago
Leon Arundell but I was more relaxed in a train. I was also able to move more freely, which counts, on journeys over a few ho... View
Brian Kilgannon - 7 hours ago
Frances I think you answered the question. No one uses it so why build it when we have more pressing issues at the moment. It... View
Oan Nbn - 8 hours ago
Leon Arundell but I guess Canberra to Yass need to connected from Kingston without passing CBD and making Light Rail stop as... View
Community 21

Capital Retro - 5 hours ago
Now for the wind turbines. View
Dean Okeeffe - 5 hours ago
you'd think with all their planning did territorial birds not factor in. View
Henry Kivimaki - 7 hours ago
Can we train the birds to attack the work cover drones? .. 😏😉... View
News 83