Behind the scenes – Burmese Curry Place 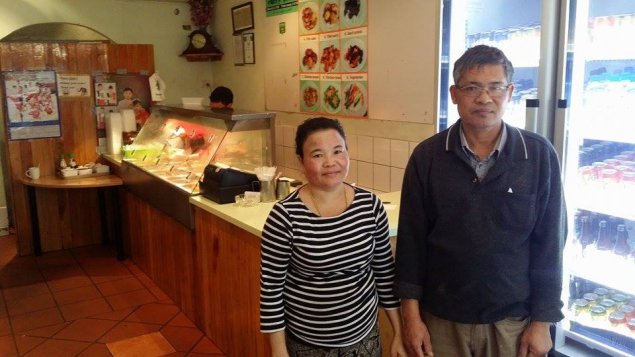 The Burmese Curry Place is a bit of a Canberra institution. It always has a line out the door at lunchtime and is easily one of my favourite feeds.

I’ve been coming here for years and thought it was finally time to sit down with the owners and find out how Mi-Mee and Nai (pictured above, left to right) came to run a Canberra culinary juggernaut.

Mi-Mee and Nai had a tough life in Burma (Myanmar). As members of the Mon people, an ethnic minority in Burma, they grew up during a brutal ethnic civil war. The Mon people’s cultural and linguistic freedom had been oppressed for decades.

Nai fought in his people’s armed resistance against the government forces. He has the wounds to show for it, and is missing a finger.

Seeking a peaceful life, Mi-Mee and Nai moved out here in 2001. They started out selling Asian herbs and vegies at the EPIC farmers markets. This helped them get on their feet, before a close friend taught Nai English and assisted with opening the restaurant in 2009.

Business was quiet for about a week, before exploding in popularity. Nowadays, depending on the weather, they serve a few hundred people every day. 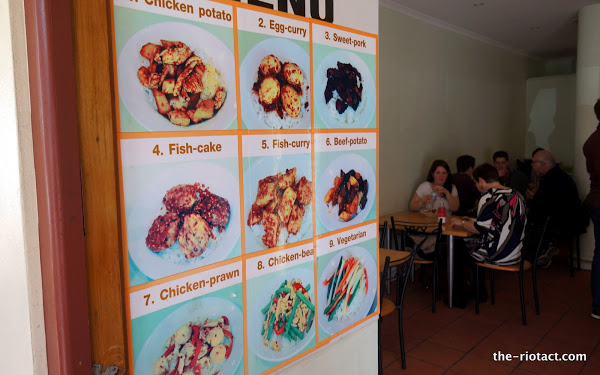 Despite its success in Canberra, Burmese food is not a highly familiar cuisine in Australia – certainly not to the extent of Chinese or Thai food. So what is it, and what sets it apart from other South-East Asian cuisines?

The first rule of Burmese food is that it is traditionally very spicy.

But to make the food accessible for an Australian palate, Nai and Mi-Mee toned down their family recipes.

For those of us who do like a bit of spice, you can add either dried or oiled chillies to your meal.

Other than spice, Burmese curries usually contain ginger, garlic, onion, tamarind and a bit of masala, but not as much masala as Indian curries. Nai likens it to Indonesian or Malaysian, but with influences from Burma’s western neighbours Bangladesh and India.

It is this tasty concoction that has hooked many a Canberran, and given Nai and Mi-Mee the success it needs to springboard into the Sydney market.

Plans to open an identical eatery in Martin Place are underway, and while not yet confirmed, it shows just how popular the home-style cooking is.

It won’t be long before we can all enjoy a 2 & 4, or whichever combination you take, on the harbourside.

Very saddened to learn today that this joint is closing down after a dispute with the landlord and the family want to take a hiatus for the rest of the year. Wish them all the best for the future! This has been a long-standing and much-loved Canberra Institution.

Burmese Curry Place had no Facebook page when I looked for it years ago. So I started one.

I’d like to transfer admin of it to Mi-Mee & Nai, but there don’t seem to be any contact details for the restaurant anywhere on the net… not last time I checked anyway.

Anyone know how they make the fish cakes? My office moved and since they don’t open on weekends, I haven’t been able to get my fix.

I am glad they get the praise they deserve. We have been a regular customers for yonks. Don’t leave it too late in the day as they can run out of food about 1900 hrs.

I think the “deliciousness” is a factor of how cheap it is.

It is affordable Take-Away.

It’s on Alinga Street, in the Bus Interchange, right?

They make what I consider to be the best curries in the city. I discovered that place 5 years ago and I love it. I used to eat there quite a bit when working in the city. Amazing value, too. Thanks for the write up!

It’s on Alinga Street, in the Bus Interchange, right?

Sonya Heaney - 16 minutes ago
There was waist-high grass near me on the weekend. They cut it a couple of days ago, and it's knee-high again already. Short... View
Community 1

ssek - 33 minutes ago
Give it time and the greens will have all kinds of legislation around halloween to prevent children having fun. View
News 1

ssek - 41 minutes ago
These marine parks are ridiculous. Stopping a few people with a rod and fishing line from catching a couple of fish does not... View
News 73

Capital Retro - 2 hours ago
I don't agree with a few of your claims. I am a senior person and at no time in my life have I ever heard of house ownership... View
Motoring 10

oh_ - 2 hours ago
As much as the noise, disruption and burnout smoke is trying for nearby residents, it does bring money and something differen... View
Rob Thomas - 13 hours ago
Floriade? View
Tim White - 13 hours ago
David Perkins you do know that it created jobs and brought millions into our local economy and in some cases kept many small... View
News 5

Chris Hobbs - 4 hours ago
Will ACT residents benefit from 30% canopy cover by 2045 from a massive tree investment, yes! Will we need to remove some old... View
Alice Paris - 4 hours ago
I dont think you understand what is happening here Chris. The Greens and Labor are responsible for the removal of so many mat... View
Bill Gemmell - 5 hours ago
Alice Paris I think people need to talk to their MLAs and let them know how the feel about various issues. I certainly will b... View
Food & Wine 32

Tim Hutch - 17 hours ago
The best way not to give them your money is to do the speed limit. It's really not that hard. View
Rosie Jennings - 21 hours ago
Better if there were more mobile units to catch speeding tailgaters. This I was towing a truck home today it was so close beh... View
David Brown - 21 hours ago
That is irrelevant. They are set low all across the country for exactly the same reason. $$$$$$ View
Food & Wine 21

ACT Policing is investigating an assault that occurred on Tuesday, 13 October at Belconnen Mall. According to police, at about...
Motoring 10

Love it or hate it, Summernats is usually big business for the territory. At a quiet time in the nation’s...
*Results are based on activity within last 7 days

In a major coup for the ACT, Manuka Oval will host two limited overs internationals between Australia and India in...
News 27

@The_RiotACT @The_RiotACT
Monster Kitchen & Bar is going vegetarian. It's a bold step for any restaurant, but there's serious pedigree in the kitchen to make it work https://t.co/0RKAFh6R47 (14 minutes ago)

@The_RiotACT @The_RiotACT
Ten schools in NSW were the target of a bomb hoax yesterday, coinciding with an HSC exam. Police say students may not be evacuated in future https://t.co/i1r4gY2TTE (59 minutes ago)

@The_RiotACT @The_RiotACT
HOME in Queanbeyan is more than just a place for people with a mental illness. For Anne Pratt, it's a privilege in her home away from home https://t.co/uxYmovijD0 (1 hour ago)