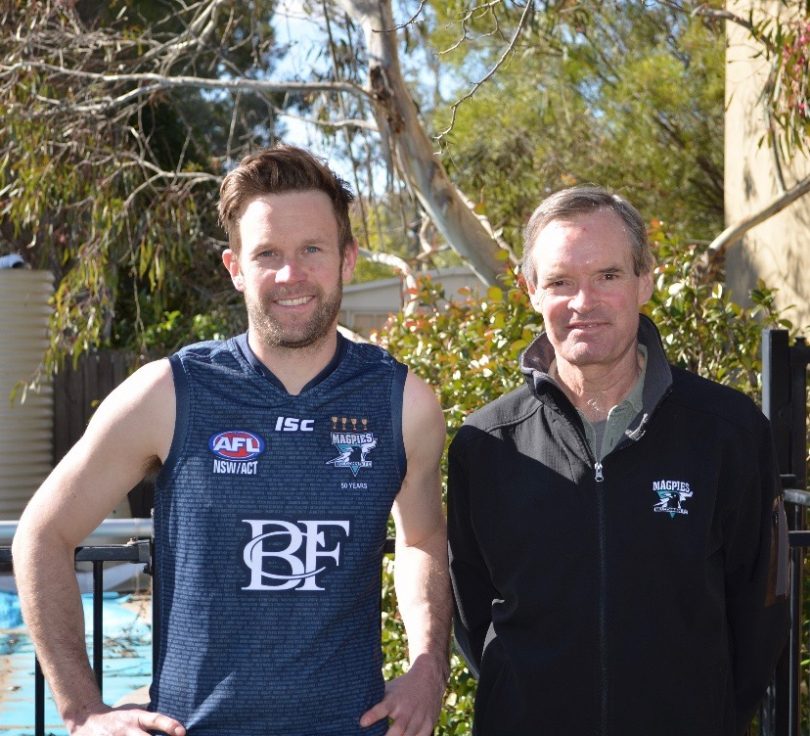 Lexie Bennett with his father, David. Lexie is wearing the Magpies 50th-anniversary heritage jersey, featuring with the names of every first grade Belconnen player. Photo: Supplied.

Lexie Bennett has flagged retirement at least three times since 2014. In fact, at the end of most seasons in the past few years, he has suggested the end is nigh.

So it’s natural that midway through this AFL Canberra season, at the age of 36, he is reluctant to say the ‘R’ word. When it happens it will happen.

Not that he is contemplating playing forever for his beloved Belconnen Magpies, as romantic as that notion could be for him, but Lexie wants to keep his options open.

“Once over 30, I had to ask myself: what are my priorities? I am reluctant to commit. I’m certainly close to the end and it’s something I’ve been considering for a while.”

And that is about as far as he will go on the subject of retirement but in terms of priorities, he has a young family with wife Rebecca and two children under five years of age.

As Lexie recognises, “football is a big part of my life but not the only part”.

That’s not to under-estimate the role football has played.

For Lexie, the most important thing has been the life-long friendships made through playing for the Magpies. And it’s why he continues to play.

“If you are going to exercise,” he reasons, “you might as well do it with your mates.”

It is something he has observed all his life through the friendships his parents made due to football.

“My father, David, still has a Thursday lunch with people he played with,” he explains. “It’s a family club.”

A couple of weeks ago the considerable dedication of time that Lexie had spent playing for Belconnen was unambiguously evident when he broke his father’s 28-year-old record of 268 senior games for the Magpies.

“It wasn’t something I have thought too much about,” says Lexie. “It felt just like another game. It may become more significant in the future but it’s the friendships that I value most.”

The family are akin to Belconnen footballing royalty, with Lexie’s brother, James, also playing over 200 senior games for the club.

The record-breaking milestone gave Lexie a chance to reflect on those early days.

“I started with the Belconnen Cats in the juniors and I always wanted to play for the Magpies. I was 17 years old when I made my first-grade debut.”

So who was the biggest influence on his career?

“Dad retired in the early 90s and I was young at the time so I don’t have clear memories of him playing. My mum, Lesley, sometimes gets left out of conversations when it comes to my football but she was as instrumental as dad when it came to my brother and I playing football. She took us everywhere, she taught us how to kick and mark on the field at half and three-quarter times when dad was playing.”

At the moment Lexie says he is enjoying playing with the next generation coming through just like he was at 17 years of age.

And it’s that next generation that has ignited the Magpies this season, with the team undefeated so far. It’s a shortened season because of COVID-19 but it’s too early to start contemplating a Belconnen premiership for the first time since 2009.

Who knows, it might be the perfect way for Lexie to finally hang up his boots … or not.

I've seen some looonnng "trams" then with many carriages then going down or beside roads. In… View 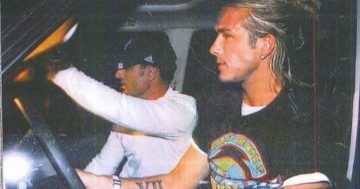 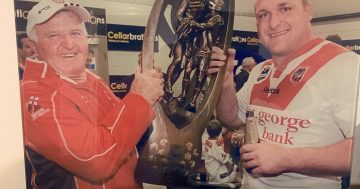