BentSpoke and the Cavalry team up for a thirst-quenching summer 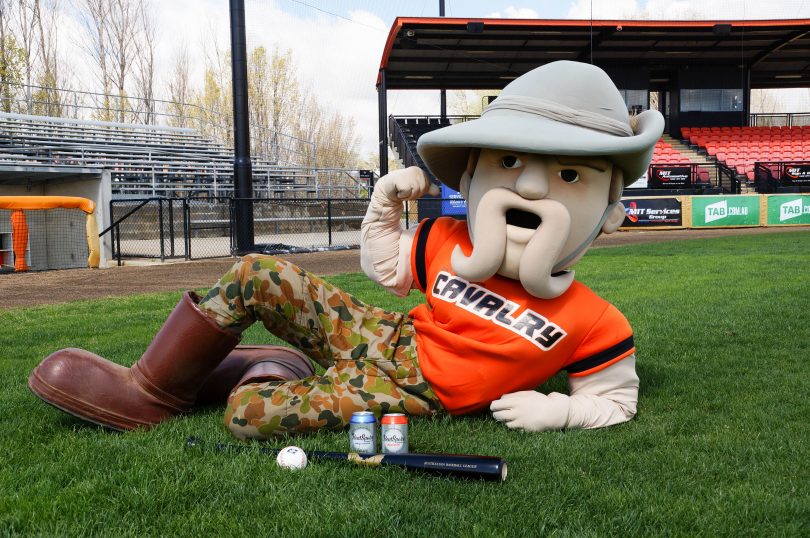 The Sarge says step up! Canberra’s baseball fans will get the chance to name Bentspoke’s new beer range premiering at MIT Ballpark soon.

‘BentSpoke Brewing Company’ is calling on Canberra baseball fans to step up to the plate and find a name for its new beer that will be on tap at the Canberra Cavalry‘s MIT Ballpark this season.

The Cavalry will be adding Bentspoke’s award-winning craft beers to its offering, in a partnership that includes the specially brewed beer and a new bar at MIT Ballpark.

Cavalry General Manager Dan Amodio said the club was excited to kick off its partnership with BentSpoke this year, and not just because BentSpoke’s orange Crankshaft cans matched its jerseys perfectly.

“Baseball is always better with a cold beer in your hand and I’m excited that we’ll be adding BentSpoke to the taps at MIT Ballpark,” he said.

“Plus, their brewers will be brewing a brand new beer exclusively for Cavalry fans and, judging from how good the rest of their beers are, I’m sure our fans will love it.”

BentSpoke co-owner and head brewer Richard Watkins is calling on Cavalry and BentSpoke fans to help find a name for the exclusive brew.

“We’d love to hear ideas from the fans as we name their beer,” Richard said.

“Anyone with a good idea should email it to lovebeer@bentspokebrewing.com.au before the end of October and we’ll run a poll of the best suggestions”.

Mr Amodio said the Cavalry was also working with BentSpoke on building a new container bar down the first base line in an area it’s named the ‘Canberra Containers Village’.

“It’ll be a cool new destination at the ballpark where fans can grab a beer, listen to some music, and enjoy the game,” he said.

“We are both passionate about being part of the Canberra community and I’m hoping we can bring Canberra beer and Canberra baseball together for years to come.”

The Canberra Cavalry’s first home games at MIT Ballpark are against Sydney Blue Sox from 23-26 November.

Nada Krstin - 43 minutes ago
Garvin Francis OMG, your comprehension ability is rather lacking...re-read all the posts fully so you actually may understand... View
Nada Krstin - 58 minutes ago
Kate Le-Goat yes I get that, and I'm all good with that - showing my covid vaccine status - but that is not the point - maybe... View
Nada Krstin - 1 hour ago
Peter Marshall what? Seriously, so please explain WHAT is the point of the covid vaccine if it is not to keep you from develo... View
News 12

Pauly Berger - 1 hour ago
Fantastic concept, visionary thinking your community should be embracing, congratulations AFC View
Gordon Arthur Truesdale - 1 hour ago
Good one!, Garry, when the machines were first mooted, I asked Lionel James about them, suggesting they would take over the c... View
Denise Bourke - 2 hours ago
Not a blessing for those supposedly buying the homes for aging. Very creative and imaginative but hardly a good match. View
News 12

Denise Bourke - 2 hours ago
insurance'll cover that Shirley View
John Killeen - 2 hours ago
At least the new electric fire trucks will always be first on-scene to a battery fire! View
Colin Mitchell - 2 hours ago
Nick Anderson and they don't have service to... View
Opinion 2

Nada Krstin - 2 hours ago
Zoya, I don’t understand why you even call these people ‘smart’? What makes them ‘smart’ – a uni education or fol... View
Community 5

Warren Warrenson - 2 hours ago
Those are some big days… carrying packs or with support vehicles etc? View
Xuan Le - 3 hours ago
I wish I knew this earlier.... View
Sport 1

@the_riotact @The_RiotACT
Are you familiar with creepy facts? If so, this ghoulish Ken Behrens #Quiz is for you! It has plenty of spooky stuff for #Halloween, plus a few other bits about Canberra and current affairs https://t.co/kjZY3kTHca (2 hours ago)

@the_riotact @The_RiotACT
Events are making a comeback to Canberra now that lockdown has eased. And the timing couldn't be better! #Oktoberfest, #Halloween and #MelbourneCup Day are just some of the highlights to stick in your diary this week https://t.co/oXZLz4Gybr (3 hours ago)