Best of Canberra Taste Off – Butcher

Sunny and 32 degrees on Saturday, I was ready to host an Aussie Summer BBQ. There were so many recommendations for which butcher I should visit, as far as Gungahlin and Wanniassa.

Meatways Butchery at Kambah Village received many votes for their sausages and customer service. Having previously lived in the Weston Creek area I was surprised that I had never been. I’m sorry to say that I left the store feeling disappointed. I had entered hoping that the butcher would be a chatty kind of guy, interested in what I was cooking and would make some recommendations (because he/she has a passion for what they do) however, when I asked what the most popular product was, I was met with “I don’t know”. After what felt like poking and prodding for an answer, I was led over to pork florentine feta, pinenuts and spinach sausages (3rd in Australia 2012 Gourmet, according to the label). I purchased the sausages and made my way to the Griffith Butchery, in hope of a wider selection of meats.

The Griffith Butchery is exactly how I picture a Butcher Shop; clean, neatly displayed, fresh looking meat, carcusses hanging along the back wall and butchers in fresh white aprons. I was immediately greeted with a very cheerful good morning. Again, I asked what the most popular product was and was quickly led around the shop and introduced to all the popular meats. I decided on beef sausages and pepper and rosemary lamb kebabs. I was impressed with the variety at Griffith, including the cabinet full of fresh pies, as well as fresh and frozen, ready to use, chicken stock. Who has time to make their own chicken stock these days?

I eagerly made my way home, excited to turn on the barbie. I threw on the sausages and kebabs and was immediately hit with the most amazing smell of the barbecuing meat, rosemary and salt.

It was time to eat! 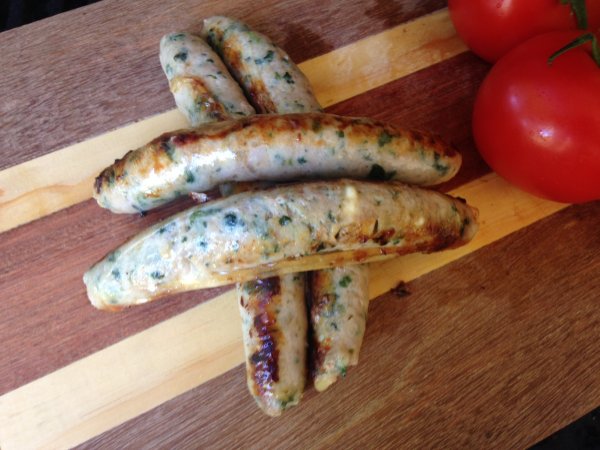 I don’t normally buy flavoured sausages so I was excited to try the pork florentines from Meatways. And Bam! Massive flavour explosion! Fetta, pinenuts and spinach is definitely a winning combination and a crowd favourite. 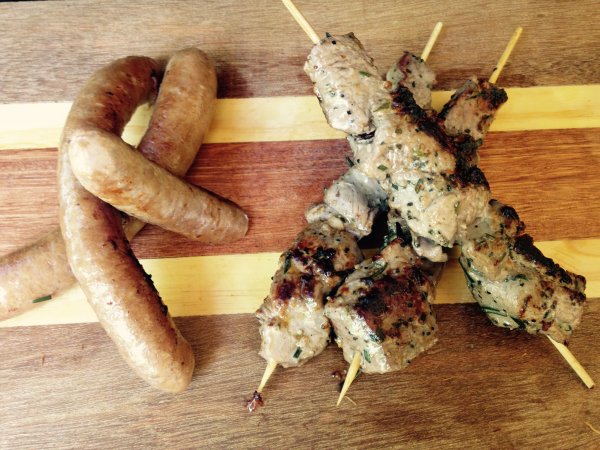 The lamb kebabs and sausages from Griffith were also winners. Both were jam packed with flavour, they were salty and just so dam delicious.

This one was a toughie, but I’m going to have to go with Griffith Butchery for “best of Canberra” this week. The customer service and variety was fantastic, and although Griffith do not have pork florentine sausages, what they do have, more than makes up.

Florey Butchery for Mrs Spykler and I..best steaks bar none..Friendly service and we have been purchasing meat there for close to 7 years. Never disappointed.

It’s lucky the Kambah meat is good, because the attitude turned me off on the second visit after giving them the benefit of the doubt on the first visit; advice was a real chore, and didn’t come easy. No more.

Wish I had seen you asking for butcher recommendations as I would’ve created a number of profiles to push Aaron at Jordoschopshop in Wanniassa. Fantastic meat, legend of a guy and they deliver!

Now that has certainly made me hungry. A accountant and a good butcher are hard to come by and if you find one dont let them go.

After moving from south side to watson, I would surely like to recommend http://lostriverproduce.com.au/ who are around the petrol station of the dickson shops. Apparently they have their own farm in crookwell !

Has never let me down. My 2 cents.

I had entered hoping that the butcher would be a chatty kind of guy, interested in what I was cooking and would make some recommendations (because he/she has a passion for what they do) however, when I asked what the most popular product was, I was met with “I don’t know”.

That is very similar to my experience too. Once was enough for me …

Jordo’s Chop Shop: A cut above the rest

@The_RiotACT @The_RiotACT
A leading Canberra employment lawyer says the government has demonstrated a failure to grasp the origin of the current workplace scandals and the urgent need to shift Australia’s sexual harassment laws onto a preventative, rather than reactive, footing https://t.co/VFDWiyZ3p6 (9 minutes ago)